Torres' Title Hopes are Stronger than Ever 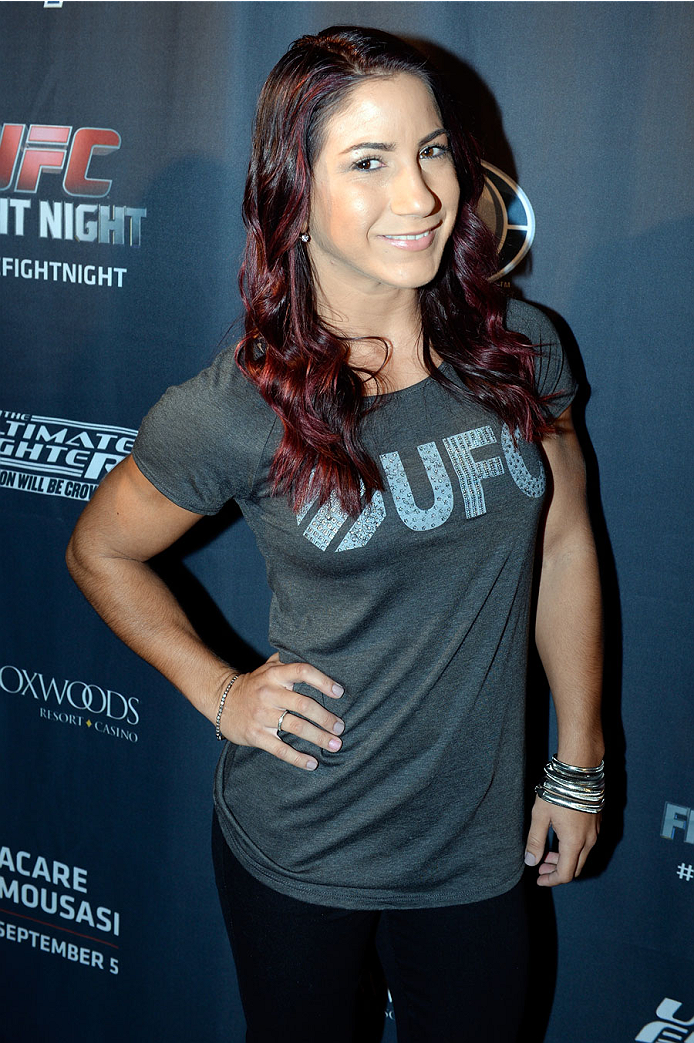 Considering that Tecia Torres’ nickname is “Tiny Tornado,” patience is probably not one of her greatest attributes, but that's part of her charm.

Let’s face it, who wants to see a fighter who has a five-year plan to get to the UFC title? It’s much more appealing to see someone whose goal isn’t just to wear UFC gold, but who wanted it done yesterday.

Torres thought she would already be walking around the American Top Team gym in South Florida with that strawweight title belt, but things didn’t exactly work out as planned on season 20 of The Ultimate Fighter, which determined the UFC’s first 115-pound champion. Torres had her shots, but a quarterfinal loss to eventual season winner and champion Carla Esparza put those dreams on hold, but only for a moment.

“I’m still on that journey,” the 25-year-old said. “I really thought I was going to win that show. It didn’t go how I planned, but I gained a lot of knowledge out of it, I was able to learn what I need to work on and I’m still driving for those wins and I still think that one day I’m going to hold the belt. It’s just going to be a little bit more time than I expected.”

And when you’re 25, you’ve got more than enough time to get everything in order and gear up for another run. That’s where Torres is these days, fresh off a December win over TUF 20 castmate Angela Magana on the season finale card. Yet even though she returns this Saturday to open up the UFC 188 main card against another TUF alum in Angela Hill, Torres did want to get back to business even sooner.

“I’m very honored to fight in Mexico, but me and Angela had the bad luck of the draw and we’re fighting last,” she said. “We’re the last ones from the show to fight, and six months is a long time. I want to fight.”

Torres laughs, but she’s serious as well. Again, it’s not a bad thing, because everyone wants to see a fighter who wants to fight. Torres fits that description perfectly, but in the great scheme of things, it was also good for the UFC to put her on the Mexico City card. No, she’s not Mexican, but she’s a proud Latina of Puerto Rican descent who can speak Spanish and be an ambassador to a country that embraces women’s combat sports. And if that’s the reason for a longer than usual layoff, she can live with that.

“One of the things I said first and foremost is that I want to be a role model,” she said. “I want to leave a legacy for the girls coming behind me, so one day they can come up to me and take my spot and be a role model as well. I want to show that there’s a right way to do things and you can be yourself and stay humble. I’m straight edge and I think there are more things to life than some of the craziness and the drama that comes out of it.”

And there is no craziness and drama between Torres and Hill, a rarity considering the series of rivalries that came out of TUF 20. Yet if there was chatter about the matchup, it was over the reality that Hill, at just 2-0, doesn’t have the world-class experience of Torres, whose official 5-0 record includes wins over Paige VanZant, Rose Namajunas and Felice Herrig. That’s an impressive lineup, and Torres knows it, so she was surprised when tasked to face Muay Thai specialist Hill.

“I was most definitely surprised that I got asked to fight Angela Hill,” Torres said. “Prior to even getting an opponent, I was asking for fights and asking for anybody that was in the top ten or ranked above me. I had my eyes set on Jessica Penne. It just seemed right for me, but then they came back with Angela Hill. At the end of the day, styles make fights, and we’re strikers, so it’s going to be an exciting fight, and not that I look down on her, but I wanted something that would get me closer to the belt. For her, she has everything to win for this fight. But me, I’m expected to beat her, so I’m just gonna go in there, give her my fight and do what I’m expected to do. And even more than that, I want to showcase that I’m more than a striker in this fight and I just want to have fun with it.”

And opening up a Pay-Per-View main card in your second UFC fight before a screaming arena isn’t a bad thing. In fact, it could just be part of a bigger plan to introduce Torres and Hill to the masses.

“This isn’t the fight that I expected, but being on this card, I’m just so grateful,” Torres said. “I love (UFC heavyweight champion) Cain Velasquez, so it’s really cool to be opening up for him, and the heavyweights are always fun to watch. It’s an amazing card with really big names on it – my coach on the show, Gilbert Melendez, is on it, Eddie Alvarez too, and I have a teammate (Charles Rosa) on the card as well, so I’m stoked about that, and I think with a win, I am one step closer to that belt, and the division will be able to see who “The Tiny Tornado” is a little bit more. Last time, my fight was a good fight, but I think it may have gotten overlooked a little bit because there were so many women’s fights that night, but now it’s my turn and this is my time to shine.”

Don’t expect her to let it slip away either.

“This is going to be the biggest show I ever fought on. This is my big opportunity to be on such a big card, and we made the main card, so it’s really, really cool.”

The belt is still the goal though, no matter who has it when she gets there.

“I don’t care who has the belt and I never call out people,” Torres said. “Right now, I’m fighting Angela Hill, and then after that I’ll fight whoever else the UFC gives me, but my ultimate goal is to fight for that title, and at that time, whoever has it, that’s who I want to fight.”