"Since I just started in the UFC not a lot of people have seen my potential, but I'm hoping to show the world my skills." - Tor Troeng 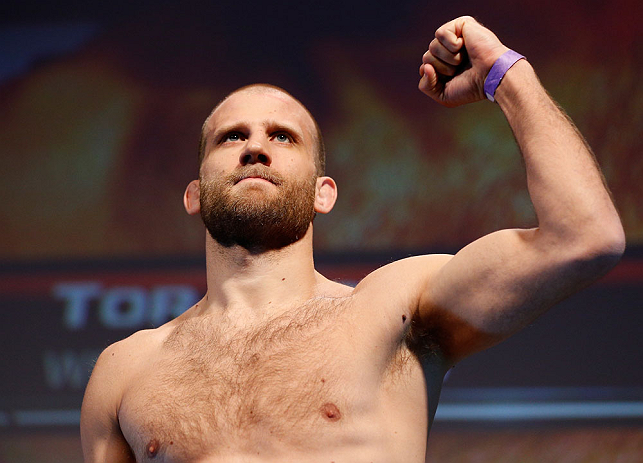 With only one loss in nearly five years and 11 wins in that time span, Tor Troeng assumed that a call from the UFC was on the horizon. But with his 30th birthday approaching and the phone not ringing, the middleweight decided that maybe a more unconventional road to the Octagon was going to be necessary.

“Before I got into The Ultimate Fighter I thought I was close to getting a call,” he said. “So I really didn't want to go through TUF, but as time went by and I didn't get my chance, I started to see TUF as my way in more and more. So I went for it and got in.”

A 1-1 stint on TUF 17 and a win over castmate Adam Cella later, Troeng finally has the label “UFC fighter” next to his name, one that he will put into action once again this Wednesday at UFC Fight Night in Brazil against Rafael Natal. Safe to say it was a good decision?

“Looking back at it, it was a great time,” said the Umea, Sweden native. “It was very hard in many ways, but definitely a once in a lifetime experience and I met a lot of great people. I was very skeptical before, but now I really encourage guys to take the chance to get onto the show, since I think it's the best way to get into the UFC.”

For Troeng, a member of Team Sonnen, it was an opportunity to get some different looks in training, introduce himself to an entirely new fanbase, and yes, get into the UFC. Yet after submitting Scott Rosa to get into the house and losing a bout to Josh Samman, his chance for a spot on the UFC roster came down to his April match with Cella, and the eight year pro was on top of his game in finishing off his foe in a little over three minutes. In a way, it justified his choice to leave his Masters degree in Engineering Physics to the side in order to pursue a career in MMA, something his mother wasn’t too sure about at first.

“Martial arts have been always been a part of my life but when I started to make a career of it my mom was really skeptical,” he said. “Now she has accepted it and sees the good things that the training and competing brings.”

For Troeng, that was never an issue.

“I love every part of it,” he said of the sport. “To prepare for a long time and then perform for a very short time takes a lot of effort and makes you really be in the moment in the fight. Overall, it's a great thrill and can't be found anywhere else.”

When it comes to such thrills, they’re at their most intense in the UFC, especially in Brazil, where the fans will likely be loud and boisterous from the time Troeng leaves the locker room Wednesday to face home country favorite Natal. That’s enough to deal with. But when you add in the ground pedigree of “Sapo” and the fact that he’s won four of his last five in the Octagon, it’s going to be a tough battle for Troeng, who has an identical MMA record (16-4-1) but not nearly the UFC experience.

“I think Natal is a tough opponent with skills in a lot of areas and who always comes to fight,” said Troeng, who knows that he’s got a fight in front of him but also that with great risk comes great reward.

“A win over him would make me climb the UFC ladder,” he said. “And that is what I want to do. I want to work my way to the top, so this is a perfect fight for me.”

To prepare for it, Troeng has become the latest Swedish standout to make the journey to San Diego and the Alliance Training Center, joining top light heavyweight Alex Gustafsson.

“The main thing I like about Alliance is the atmosphere,” he said, “with everybody helping out and supporting each other. It's a place where winners are made and that's what it is really all about. Then they have great coaches such as Eric Del Fierro and also my Swedish striking coach Andreas Michael. And since there are a lot of Swedish fighters training there, it feels more like home. We kind of have a little Swedish settlement there.”

It’s made the time away from home a lot easier, and with that out of the way, all he’ll have to deal with on fight night is Rafael Natal. And if he has his way in what he expects to be “a war,” it will be the start of something big for him in the 185-pound weight class.

“I think the middleweight division is one of the toughest and one with a lot of talent,” he said. “But I see myself as an all-around fighter with the potential of getting to the top. And since I just started in the UFC not a lot of people have seen my potential, but I'm hoping to show the world my skills.”