The Top Ten Submissions of 2017

The submission. It’s not only a way to attack in the Octagon, it can also be the great savior, the combat sports version of a walkoff home run. And when done perfectly, it’s a thing of beauty. Here are ten of the best from 2017.

History is nice, and Demetrious Johnson did set the UFC record for most successful title defenses with his win over Ray Borg in October, but this could have been the first prelim on UFC FIGHT PASS and DJ would have locked up the best submission of 2017 award with a move that will go down as one of the best of any year. How good was this? Try suplex to armbar in one fluid motion, requiring several replays to fathom that this was actually real and not a figment of our imagination. “Mighty Mouse” continues to show off new wrinkles in his game, further cementing his place as an all-time great. 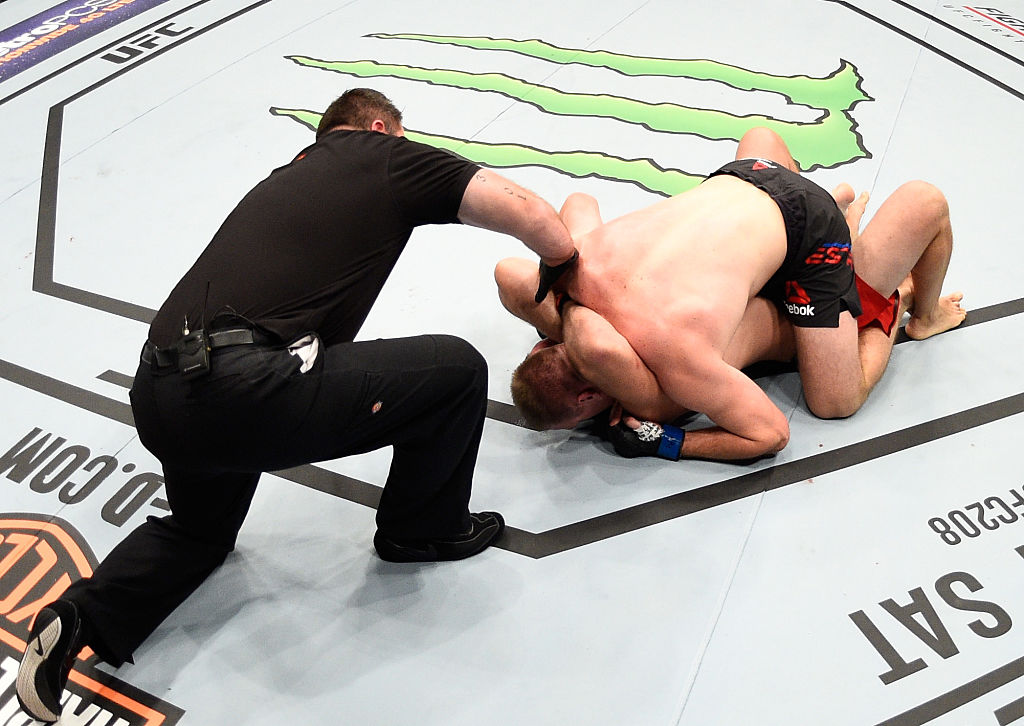 How can the first and only Ezekiel choke submission in UFC history not get recognized here? So there’s that, but even if it wasn’t the first, Aleksei Oleinik’s finish of Viktor Pesta in January was so sublime and so surprising. Mounted by Pesta, it looked like Oleinik was about to be in for a world of pain, but the submission master dubbed “The Boa Constrictor” calmly found his way to sink in the choke, and it was game over as Pesta tapped out at 2:57 of the first round. 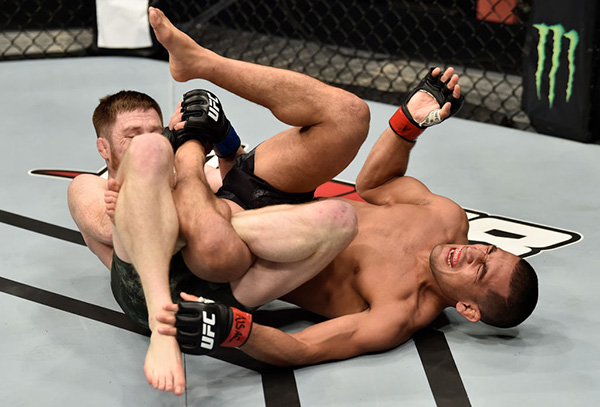 Oleinik’s finish of Pesta was almost peaceful in its execution, but when Brett Johns pulled off the second calf slicer in UFC history when he submitted Joe Soto in December, it was a reminder that people tap out to moves like this because, frankly, they hurt. And fighters and jiu-jitsu players will tell you that calf slicers are among the most painful subs, so it was no surprise that once Johns locked it up, the veteran Soto had no choice but to tap out 30 seconds into the fight. 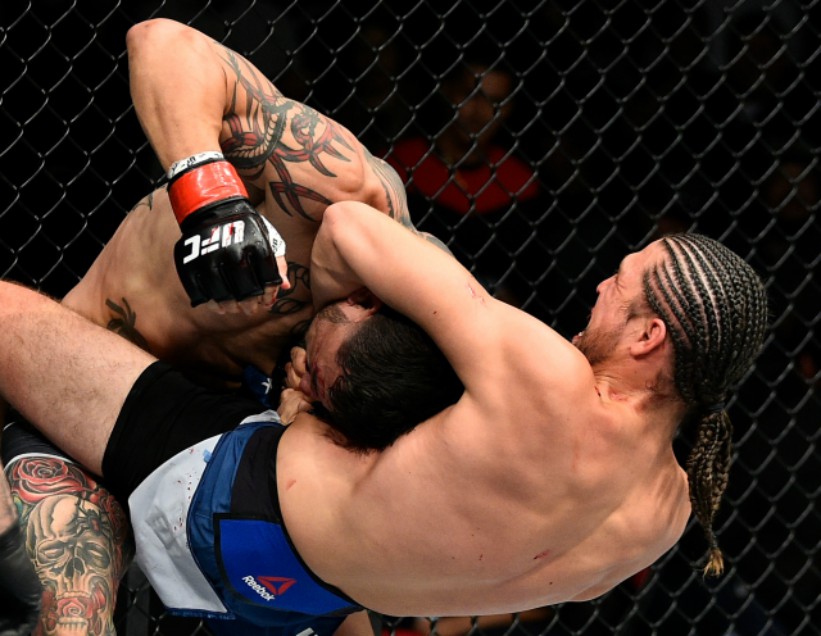 Carrying on with the same theme as Johns-Soto, Brian Ortega’s guillotine choke submission of Cub Swanson proved just how uncomfortable it can be to be caught by a top level fighter and feel like there is no escape but to tap out or go to sleep. Once Ortega locked in his choke of “Killer Cub,” Swanson knew he was in deep trouble, and to see a seasoned vet like him in such a situation was a bit of a shocker, but Ortega can do that to anyone at 145 pounds.

Leading into January’s bantamweight title elimination bout between Valentina Shevchenko and Julianna Pena, there was no shortage of fans and pundits who believed that “Bullet” would outlast “The Venezuelan Vixen,” but I don’t recall anyone predicting that she would win by submission. So when she forced Pena to tap out to an armbar in the second round, it earned Shevchenko a shot at Amanda Nunes’ world title and also made it very clear that she is as dangerous on the mat as she is on the feet.

6 - Iuri Alcantara-Luke Sanders
https://www.ufc.tv/video/iuri-alcantara-vs-luke-sanders
Luke Sanders was putting it on Iuri Alcantara at UFC 209 in March, and entering the second round, it wasn’t a question of if Sanders would win, but when. Yet as he took punch after punch and fell further behind on the scorecards, Alcantara found daylight for a brief second, and that’s all it took for him to lock in a painful kneebar and end Sanders’ night. That’s the beauty of MMA right there, as it’s never over until it’s over. 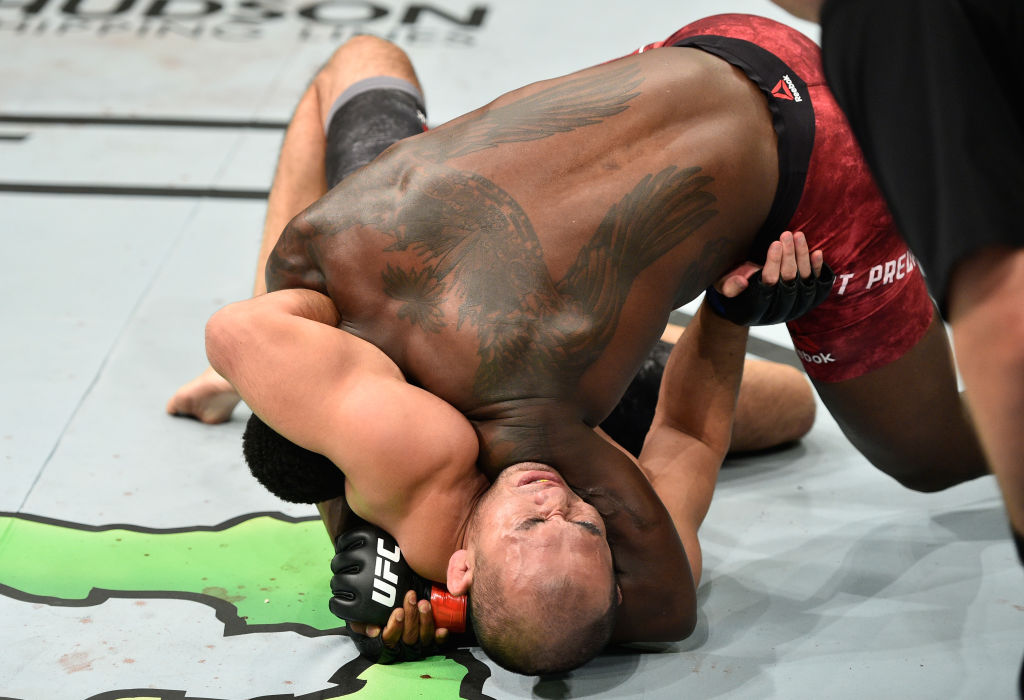 Ovince Saint Preux’s Von Flue choke is becoming the MMA equivalent of the Green Bay Packers’ sweep of the 1960s: you know it’s coming, but that doesn’t mean you can stop it. And twice in 2017, OSP pulled it off, first with Marcos Rogerio de Lima in April and the second time in September against veteran Yushin Okami. And the funny thing is, once the Okami fight hit the mat, you assumed that Okami would know that the Von Flue was OSP’s go-to move and would react accordingly. But as soon as that thought finished, Okami was done and OSP had another win, the fifth by Von Flue choke in UFC history. And Saint Preux has three of them. 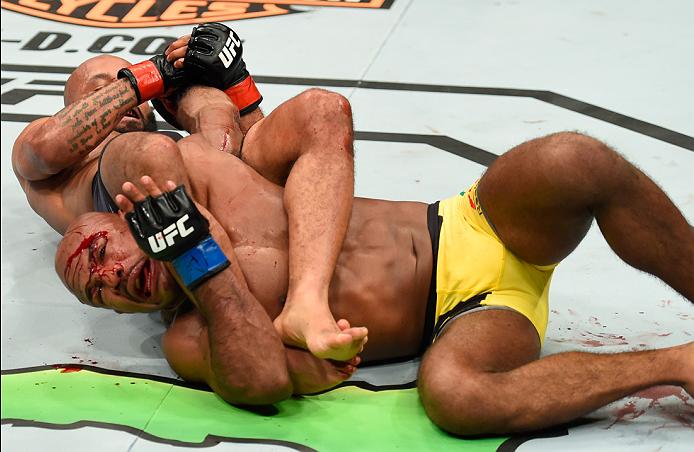 Demetrious Johnson’s April victory over Wilson Reis continued to show why he’s one of the best ever. Yes, Johnson has a well-rounded skill set that has him able to handle himself wherever a fight goes, but when you sink in an armbar on a Brazilian Jiu-Jitsu black belt like Reis and finish him, that’s just another feather in the cap of the man known as “Mighty Mouse.” Mighty indeed.

Georges St-Pierre’s first fight since 2013 was one of the most inspiring performances of 2017, but it was the way he did it that earned him a spot here. Middleweight champion Bisping was coming on in the third round, bloodying GSP as he looked to be taking over the fight. But then St-Pierre dropped Bisping with a punch, and when his follow-up barrage didn’t end the fight, a rear naked choke did the job, marking the Canadian’s first submission win since his 2007 victory over Matt Hughes. Now that’s a comeback.

10 - Zabit Magomedsharipov-Sheymon Moraes
https://www.ufc.tv/video/zabit-magomedsharipov-vs-sheymon-moraes
Zabit Magomedsharipov’s anaconda choke finish of Sheymon Moraes wasn’t the most spectacular submission of the year, but it makes this list because of the cool in which he pulled it off. This is a rising star who does everything seemingly effortlessly, and it’s almost as if he decided to show off all aspects of his game against Moraes before deciding to end the fight in the final round. Zabit is a special fighter and he will be fun to watch in 2018 and beyond.