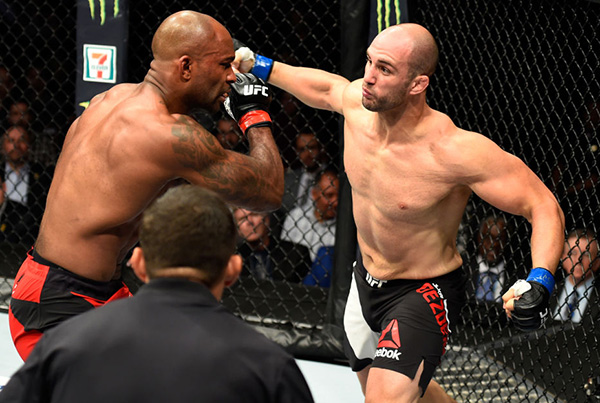 Volkan Oezdemir punches Jimi Manuwa during the UFC 214 event at Honda Center on July 29, 2017 in Anaheim, CA. (Photo by Josh Hedges/Zuffa LLC/Zuffa LLC via Getty Images)" align="center" /> When coming up with the list of top newcomers for 2017, I never had as much trouble as I did this year. Rough for me (boo hoo), but great for fight fans and the sport of mixed martial arts because the level of talent is getting that much higher. And while we still have one more show to go on Dec. 30, given the unofficial rules for the unofficial awards, it’s the perfect time to break out the best fighters to make their UFC debut in 2017.

So what are those rules? They’re simple: a fighter had to have made his or her UFC debut in 2017 and fought in the Octagon more than once. For other notables, as well as those who only fought once and earned a place on this list, look at the Honorable Mention section. I will occasionally make an exception, though, and this year, the exception is UFC women’s flyweight champion Nicco Montano because, well, she won a world title in her Octagon debut. Worth bending the rules a bit, right?

1 - Volkan Oezdemir
From debutant to world title challenger in a year’s time? That makes Volkan Oezdemir the clear winner of the 2017 UFC Newcomer of the Year award. Coming in on short notice to face Ovince Saint Preux in February, the Switzerland native put himself on the UFC map with a split decision victory over OSP, but there were just a few ripples in the MMA community after that fight. But then Oezdemir took a combined 70 seconds to knock out Misha Cirkunov and Jimi Manuwa, and suddenly everyone knew who “No Time” was. Daniel Cormier certainly does, as “DC” will be defending his UFC light heavyweight crown against Oezdemir at UFC 220 in Boston on Jan. 20. 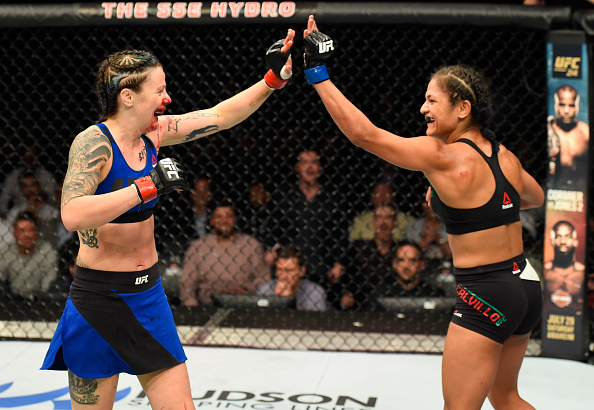 Joanne Calderwood and Cynthia Calvillo high five during the UFC Fight Night event at the SSE Hydro Arena Glasgow on July 16, 2017 in Glasgow, Scotland. (Photo by Josh Hedges/Zuffa LLC)" align="right" /> Strawweight contender Cynthia Calvillo still has a fight against former world champion Carla Esparza coming up next week at UFC 219, but no matter what happens in that bout, you can’t ignore what the Californian did in 2017. In fact, let’s go one step further and point out that after injuries delayed her pro debut for two years, she went on to fight her entire six-fight pro career in the space of 11 months. That includes pre-UFC victories over TUF 26 competitors Gillian Robertson and Montana De La Rosa, and three Octagon wins in 2017 over Amanda Cooper, Pearl Gonzalez and Joanne Calderwood. If she knocks off Esparza as well, that’s one of the best UFC years ever. 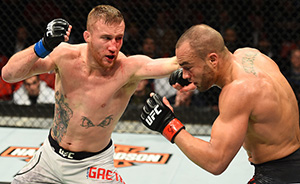 Eddie Alvarez during the UFC 218 event December 02, 2017 in Detroit, Michigan. (Photo by Josh Hedges/Zuffa LLC)" align="left" />The best thing you can say about Justin Gaethje is that his fighting style almost defies description. There’s a primal intensity to it that can’t be put into words, and that’s probably the way he likes it because it means you have to watch him to get a read on him. And watch him we did in 2017, as he parlayed a stellar 17-0 record and a World Series of Fighting title into a UFC contract in which he’s thus far put together a win over Michael Johnson in July before losing to Eddie Alvarez in December. Both bouts didn’t just earn Fight of the Night honors, but each is on the short list for Fight of the Year. I can’t wait for the encore in 2018.

4 - Marlon Moraes
After his long stint as the World Series of Fighting bantamweight champion, everyone knew Marlon Moraes was good. But when he made his move to the UFC in 2017, some wondered how he would deal with the step-up in competition. Answer: It was like he didn’t skip a beat. Yeah, Moraes lost his debut via split decision to Raphael Assuncao, but with his subsequent wins over John Dodson and Aljamain Sterling, making it three fights in a row against a trio of the UFC’s best, it’s safe to say that “Magic” will be in the running for a title shot in 2018.

5 - Zabit Magomedsharipov
One of my favorite newcomers of 2017 has to be Zabit Magomedsharipov. Displaying an almost otherworldly cool in the Octagon, the dynamic Russian featherweight looks like he’s in a sparring session, but only these are fights, and as Mike Santiago and Sheymon Moraes will attest, those punches, kicks, knees and submissions are real, and after two wins and two finishes, Zabit vs Anybody is a must see in 2018. 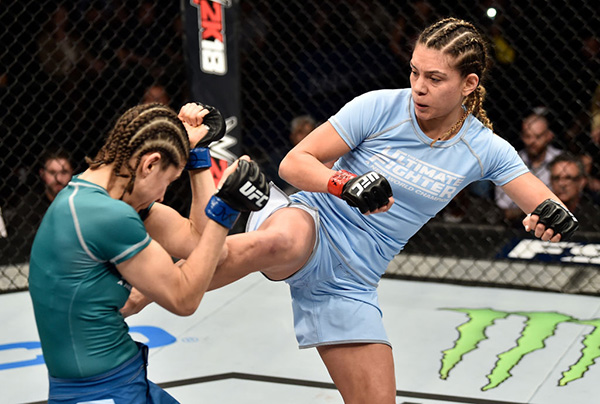 Breaking the more than one fight rule for this year is Ms. Montano, who stunned the field on season 26 of The Ultimate Fighter by beating Lauren Murphy, Montana Stewart and Barb Honchak, and then made history with a Fight of the Night victory over Roxanne Modafferi to become the UFC’s first female flyweight champion. Yeah, that’s some year.

7 - Paulo Costa
Yes, he may have started the year as Paulo Borrachinha, but by the end of 2017 he was Paulo “The Eraser” Costa, and whatever name you prefer, this Brazilian banger looks like he might be the next big star to emerge from the MMA-rich nation. Three for three in the Octagon in his first year on the roster, the unbeaten 26-year-old blasted through Garreth McLellan, Oluwale Bamgbose and Johny Hendricks, proving that he’s not sticking around to see the judges get involved.

8 - Eryk Anders
All we needed to know about former University of Alabama football star Eryk Anders took place in July, when he accepted a fight with season UFC middleweight Rafael Natal, and on short notice, no less. Anders went on to knock Natal out in less than three minutes, then he decisioned Markus Perez earlier this month. Encore? How about calling out former world champion Lyoto Machida for a fight in Machida’s hometown in February and getting it? Wow. Where I come from, we call that fearless.

9 - Dominick Reyes
Another former college football standout, Dominick Reyes used some highlight reel finishes on the regional circuit to get his call to the UFC, and once he got here, he didn’t stop, knocking out Joachim Christensen and submitting Jeremy Kimball to move to 8-0 as a pro. And while he may not be fighting the 205-pound elite yet, he appears to have the goods to do just that sooner rather than later.

10 - Trevin Giles
Some might think this is a surprise entry, but unbeaten Texas middleweight Trevin Giles’ two knockout victories in the UFC this year over James Bochnovic and Antonio Braga Neto have marked him as not just a talented fighter, but a patient one with a high Fight IQ that will serve him well moving forward. Don’t be surprised if he makes even more noise in 2018.