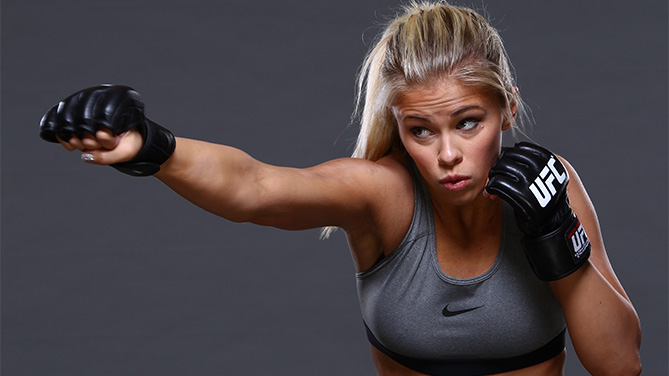 The UFC’s rookie class of 2014 was one of the strongest in years, and there was plenty of difficulty whittling this category down to a top ten. How difficult? I decided to go against my rule of newcomers having at least two fights in the calendar year and made a special entry at number ten for three of the top debutants who only fought once in 2014. So without further ado, here are the top fighters who debuted in the Octagon this year…

10 (tie) - Carla Esparza, Paige VanZant, Henry Cejudo
This trio of lighter weight fighters made quite an impact with only one fight each in the Octagon. Carla Esparza was long considered to be the top strawweight in the world, and after running through the field on The Ultimate Fighter 20 and capping it off with a win over Rose Namajunas in December, the new UFC strawweight champion proved her worth as the best of the best at 115 pounds. Fellow strawweight Paige VanZant got a lot of pre-fight attention for her looks and charisma, but in her Fight of the Night win over Kailin Curran, she showed that she’s a terror in the Octagon, or as she put it, “pretty girls are pretty bad ass too.” Finally, for a guy who won Olympic gold in freestyle wrestling, Henry Cejudo sure has some pretty impressive stand-up, and after defeating Dustin Kimura in his long-awaited Octagon debut, “The Messenger” has the potential to set the bantamweight division on its ear in a couple years.
> WATCH: Paige VanZant vs. Kailin Curran on UFC FIGHT PASS | Henry Cejudo vs. Dustin Kimura on UFC FIGHT PASS

9 - Joanna Jedrzejczyk
We all had trouble pronouncing and spelling her name, but by the time Joanna Jedrzejczyk put together back-to-back wins over Juliana Lima and Claudia Gadelha, it was clear that we needed to do our homework and get that name down, because it looks like we’ll be seeing the Polish striking machine in the Octagon for a long time. 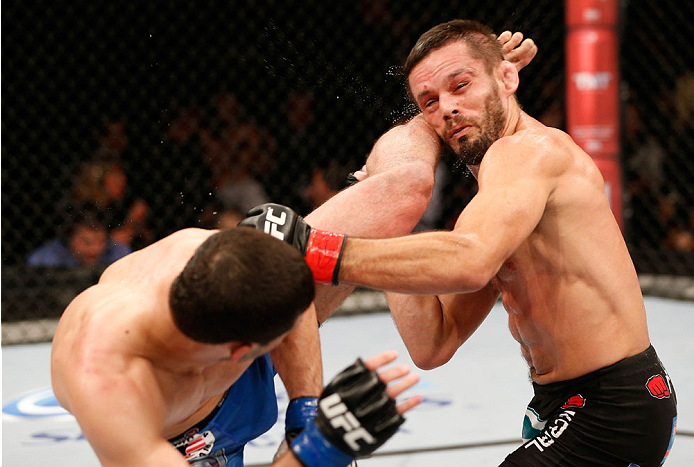 8 - Rashid Magomedov
Patient and precise, Rashid Magomedov is like an assassin in the Octagon, showing no emotion as he systematically picks apart his opponents. Cool, calm and collected in decision wins over Tony Martin and Rodrigo Damm, Magomedov earned his spot on this list last Saturday with a late stoppage of previously unbeaten Elias Silverio that showed just how good this lightweight can be.

7 - Patrick Cummins
It’s an overplayed story by now, but what’s one more mention of it? This time last year, Patrick Cummins was serving coffee. Now, he’s a UFC fighter who bounced back from a late-notice loss to Daniel Cormier in February to win three straight over Roger Narvaez, Kyle Kingsbury and Antonio Carlos Junior. No more barista jokes for this guy, that’s for sure.
> WATCH: Patrick Cummins vs. Roger Narvaez on UFC FIGHT PASS

6 - Elias Theodorou
From the covers of romance novels to the Octagon, that was the storyline for TUF Nations winner Elias Theodorou, but beyond what some have called the best hair in mixed martial arts is a real fighter who proved himself in 2014 with a dominant stoppage win over Sheldon Westcott and a decision victory over Bruno Santos in a fight that presented the Canadian with a brutally-tough style matchup that he figured out perfectly. 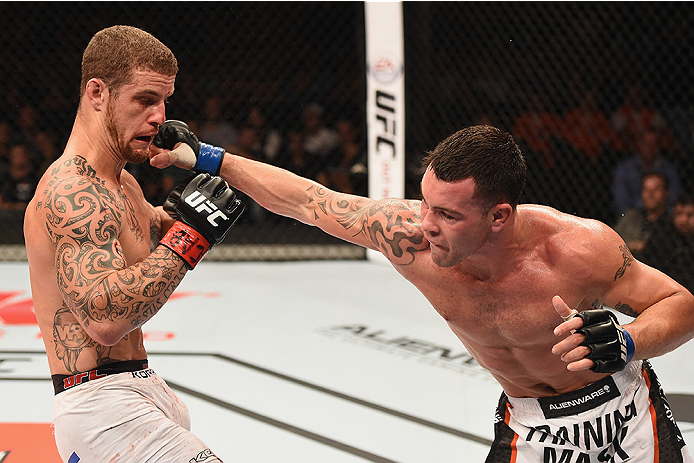 Probably one of the most “under the radar” picks on this list, former All-American wrestler Colby Covington is on his way to making his name in the UFC in a big way thanks to an aggressive style designed to finish opponents. In 2014, “Chaos” picked up two victories, forcing Wang Anying to submit to strikes and then finishing Wagner Silva via rear naked choke. It will be interesting to see what he pulls off at 170 pounds in 2015.

4 - Warlley Alves
I know, many people (including me) believe Alan Jouban defeated Alves in their November bout, but there’s no denying that the winner of TUF Brazil 3 is one of the most promising up and comers to emerge from Brazil in a while. Dynamic and explosive, two traits he showed on the reality show and in his show-winning effort against Marcio Alexandre, Alves should provide plenty of highlights in 2015.

3 - Aljamain Sterling
The new kid on the block from the Serra-Longo fight team in Long Island, New York, unbeaten bantamweight Aljamain Sterling has the potential to join squadmates Chris Weidman and Al Iaquinta at the top in the future, and after gutting out a tough win over Cody Gibson in his debut and then stopping Hugo Viana in Octagon bout number two, he’s showing that from fight to fight, he’s only getting better.
> WATCH: Aljamain Sterling vs. Cody Gibson on UFC FIGHT PASS

2 - Jake Matthews
The youngest male fighter on the UFC roster, 20-year-old Jake Matthews may have a baby face while not even being able to drink legally in the United States, but the term "beast" often gets tossed around when speaking of the Australian prospect. Those who saw the former TUF Nations competitor in his 2014 fights against Dashon Johnson and Vagner Rocha aren't likely to disagree, making him an intriguing prospect in the lightweight division.
> WATCH: Jake Matthews vs. Dashon Johnson on UFC FIGHT PASS 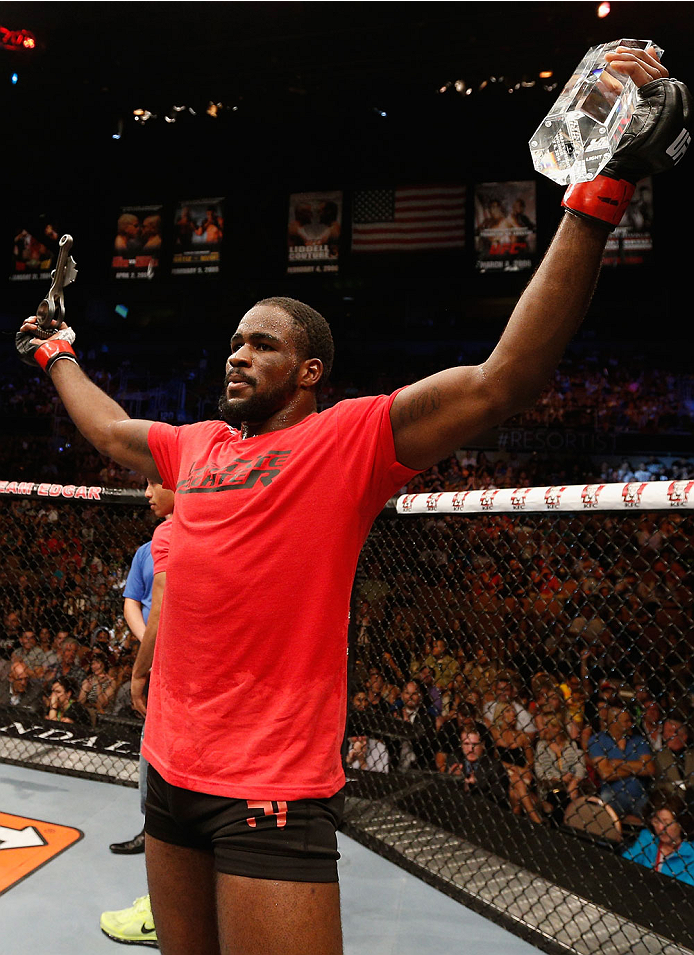 1 - Corey Anderson
A couple years ago, Corey Anderson didn't even know the UFC fighters he was being compared to. Now he's part of the roster after knocking out Matt Van Buren in the TUF 19 light heavyweight final in July and decisioning Justin Jones in December. Already known for his stellar wrestling, Anderson showed off bricks in his hands against Van Buren and the ability to deal with a late notice opponent against Jones, making it crystal clear that the Illinois native is getting better by the day, and that should frighten those sharing the Octagon with him in the future.
> WATCH: Corey Anderson at UFC 181 on UFC FIGHT PASS