A great fight is a perfect storm. Put two fighters together and you never know what you’ll get, but when both have the intention of making a statement against each other and the styles mesh, it becomes something more than just an athletic competition. When that happens, there’s nothing better in all of sports.

Here are 10 of the best fights from 2017, as the Highly Unofficial awards season continues…

The Ultimate Fighter Finale on July 7, 2017 in Las Vegas, Nevada. (Photo by Brandon Magnus/Zuffa LLC)" />I’ll be honest - I was ready to be disappointed by July’s Justin Gaethje vs. Michael Johnson bout. With all the hype surrounding Gaethje’s UFC debut and the burden of him having to live up to his past efforts, there was no way he was going to deliver. But he did. As did Johnson, and when they were done staggering each other and nearly putting an end to the bout on several occasions, it was Gaethje emerging victorious via second-round TKO. This is one of those fights you show non-fight fans to convert them, and it’s one of the rare bouts that I can watch again and go through the same emotions the second time, even though I know what the end result is. In a world that throws the “warrior” term around too lightly in sports, Gaethje and Johnson earned it. 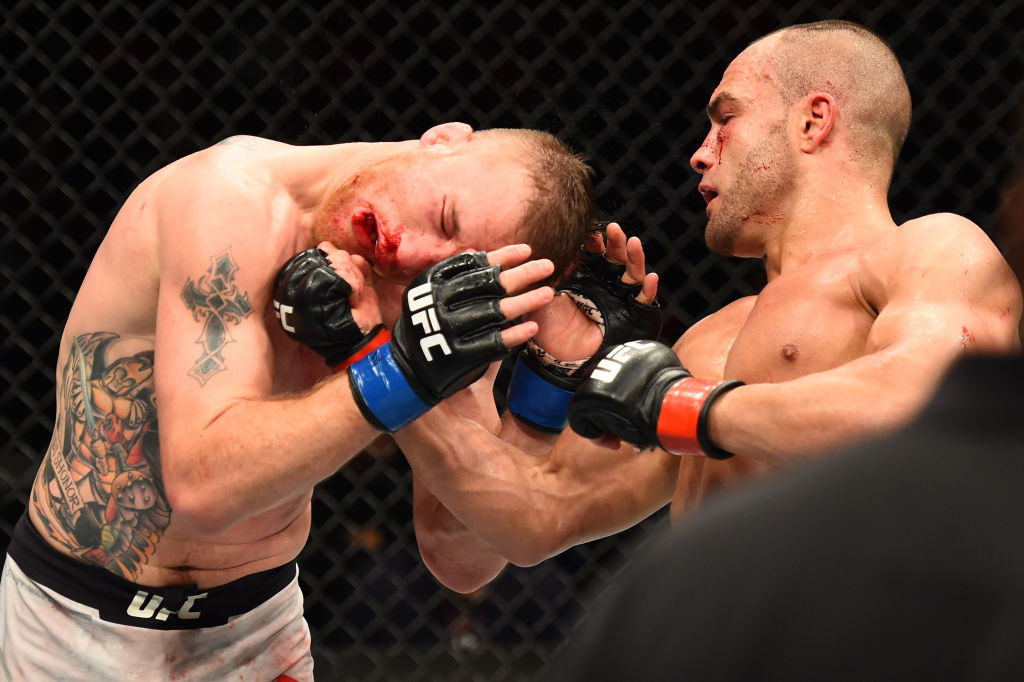 Justin Gaethje answered any questions about his migration to the UFC in his win over Michael Johnson, so when it was announced that he would be fighting fellow Ultimate Fighter coach Eddie Alvarez, there was universal praise for matchmaking that brought together two old school fighters whose main goal wasn’t just to win, but to break their opponent. And while Gaethje was the one who entered the Octagon with the unbeaten record, it was Alvarez who reached into the depths of his being to fight through pain and adversity to stop Gaethje. Yes, that sounds a little melodramatic, but if you watched this fight, you would know exactly what I’m talking about. And if you haven’t watched it…Go. Now. 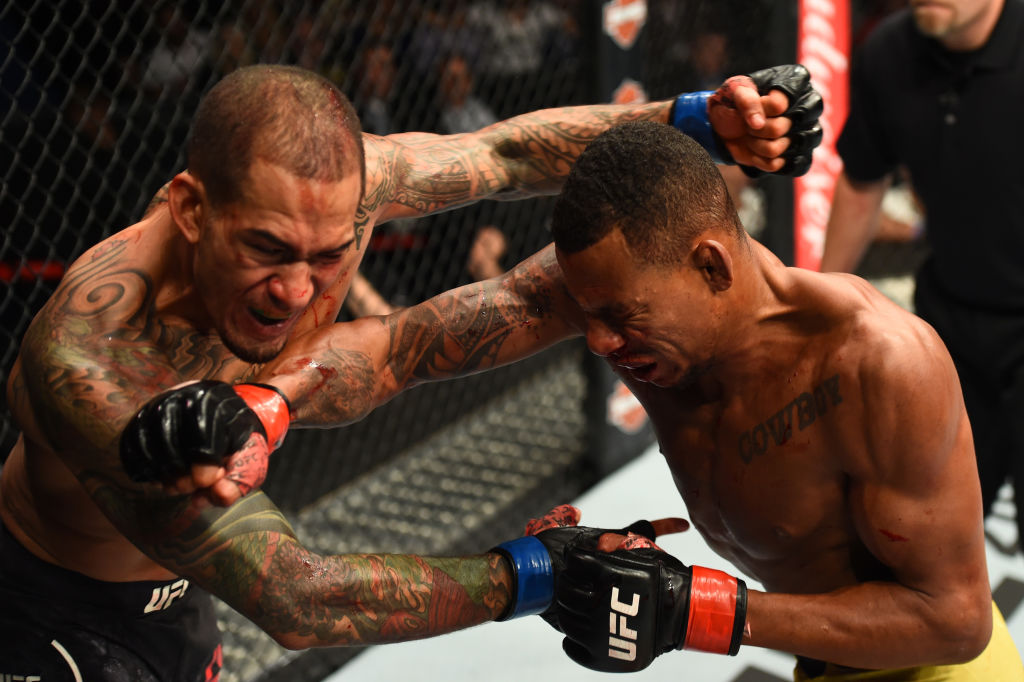 UFC 218 was one of the best cards of the year, and if you want to know how deep a card that included memorable wins by Max Holloway, Francis Ngannou and Eddie Alvarez was, just look at the FS1 prelim bout between Yancy Medeiros and Alex Oliveira. Just like Alvarez-Gaethje, Medeiros and Oliveira dug deep to find something that most athletes say they have, but only a select few really do. This was a stark reminder that it takes a special kind of person to strap on four-ounce gloves and fight somebody in an Octagon, and kudos for these two welterweights for giving us the fight that they did. Oh yeah, Medeiros won by third-round TKO. That’s how good this fight was – the result didn’t really matter. 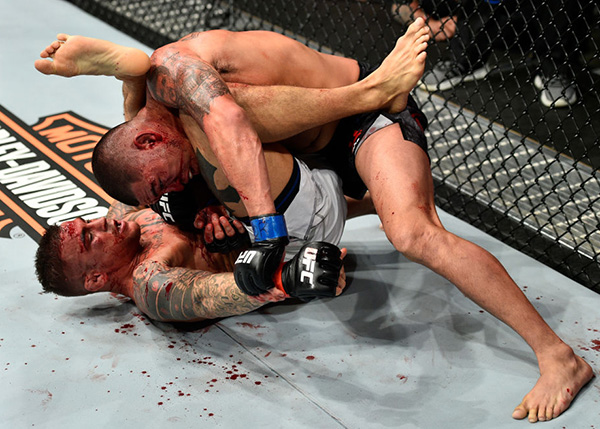 UFC Fight Night event on November 11, 2017 in Norfolk, VA. (Photo by Brandon Magnus/Zuffa LLC)" />On paper, Dustin Poirier vs Anthony Pettis was an old school throwback to the WEC days, and in reality, it lived up to all those expectations as these world-class veteran lightweights went after it like two hungry kids trying to get a UFC contract. And while the bout reached an anti-climactic finish when a rib injury ended Pettis’ night in the third round, those 12 minutes and eight seconds provided more action than a handful of five-rounders.

5 - Frank Camacho-Damien Brown
https://www.ufc.tv/video/frank-camacho-vs-damien-brown-ufc-fight-night
If you’re noticing a theme here, you’re right, I have a high level of admiration for gritty athletes whose only goal is to bite down on their mouthpiece and fight. Frank Camacho and Damien Brown fit perfectly in that mold, and in their November fight, they left it all in the Octagon in search of victory. When it was over, Camacho took a split decision win, and since many thought Brown had done enough to get his hand raised, is it too much to ask to see a rematch in 2018? 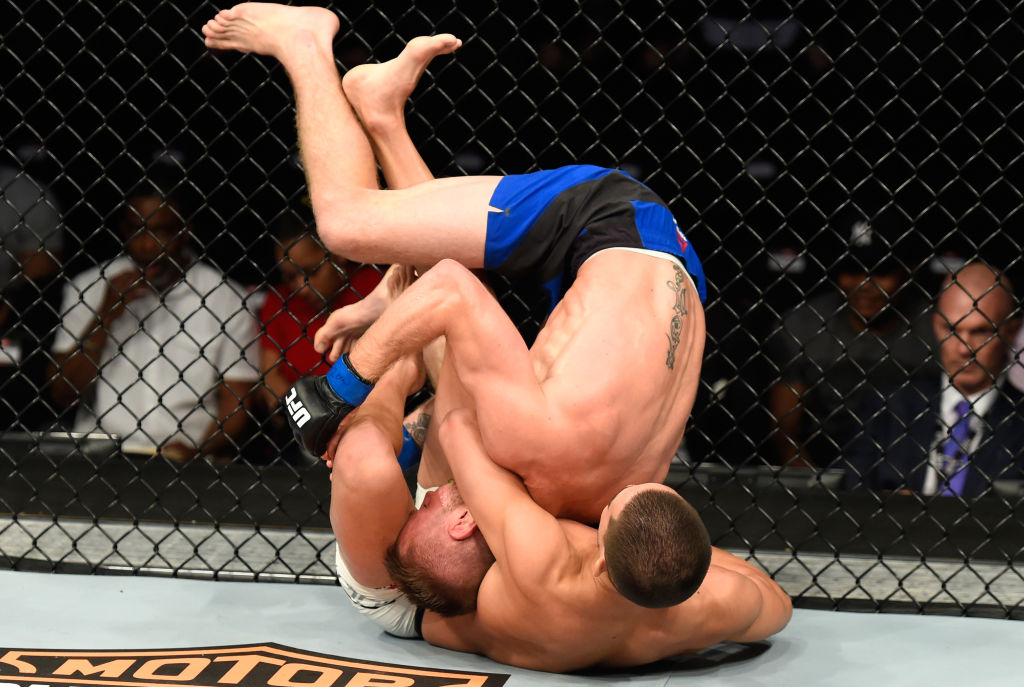 The ground is a dangerous place in a mixed martial arts fight. Guys like Tim Elliott and Louis Smolka make it even more treacherous, and for proof, go back to April and Elliott’s three-round decision win over Smolka. For three rounds, they scrambled and scrambled and scrambled some more in a fight that was exhausting to watch, but in a good way. This is another fight to be shown to non-believers, you know, the group of skeptics comprised of folks who say, “Oh man, the ground fighting is boring.” Not in the hands of Elliott and Smolka.

7 - David Teymur-Lando Vannata
https://www.ufc.tv/video/david-teymur-vs-lando-vannata-ufc-209-woodley-vs-thompson-2
A last minute move to the UFC 209 co-main event spot put lightweight prospects David Teymur and Lando Vannata in an interesting spot in March because no one knew how they would react to such pressure. Actually, let me revise that, because if anyone knew how to step up in tight spot, it was Vannata, who faced Tony Ferguson on two weeks’ notice in his UFC debut. So how would Teymur react? Well, apparently pretty well, as he received 30-27 scores across the board en route to the biggest win of his career. But this was no blowout, as both fighters went for it for 15 minutes and left a hard act for headliners Tyron Woodley and Stephen Thompson to follow.

8 - Jessica Andrade-Angela Hill
https://www.ufc.tv/video/jessica-andrade-vs-angela-hill-ufc-fight-night-bermudez-vs-korean-zombie
Like Teymur vs Vannata, February’s strawweight bout between Jessica Andrade and Angela Hill was a shutout on the judges’ scorecards for Andrade, but I guarantee that if you asked “Bate Estaca” about the three-round scrap, she’ll admit that she was in a fight. And what a fight it was, as Hill showed off her impressive technique on the feet while Andrade brought out the style that had many comparing her to Wanderlei Silva. It was back and forth all the way, and while Andrade had the advantage, Hill was never out of the fight.

As a born and bred New Yorker, I’m fond of telling people that there’s nothing like a big fight at Madison Square Garden. And Georges St-Pierre vs Michael Bisping was a big fight. Forget the high stakes involved. This one just delivered on all counts. GSP came out and won the first round like it was 2013, not 2017, but then Bisping roared back and had St-Pierre in trouble in the third until the Canadian dropped him and then finished him later in that round. High-level stuff from two of the best in the business. And in the Mecca, no less. 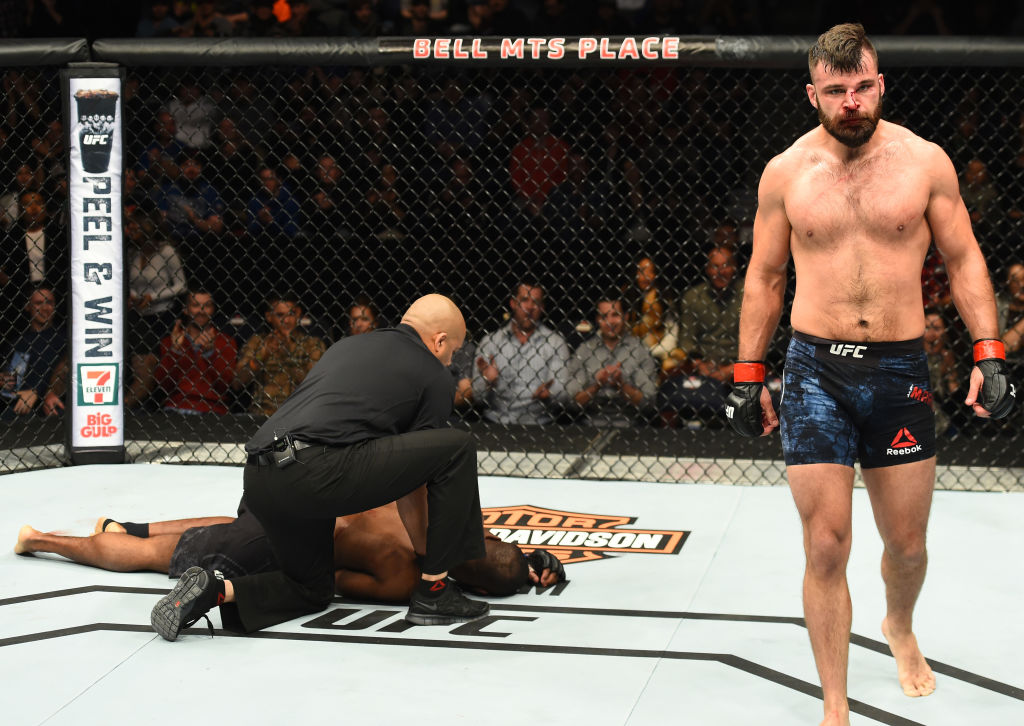 Darren Stewart during the UFC Fight Night event on December 16, 2017 in Winnipeg, Manitoba, Canada. (Photo by Josh Hedges/Zuffa LLC)" />Certain fighters show an almost effortless grace when throwing punches, knees and kicks, and when an opponent gets knocked out, it almost loses some of its impact. Then there’s Julian Marquez, who throws almost every shot as if he’s trying to knock down a wall, and while he’s only had one UFC fight thus far, that one fight was enough to make us all want to see more. And while Marquez’s style usually results in KO wins, when he gets a dance partner who can take it and dish it out like Darren Stewart did in December, it’s a Fight of the Night winner that shockingly ended not with a knockout, but by a guillotine choke locked in by “The Cuban Missile Crisis.”