The Highly Unofficial awards season continues with the best fights of 2014... 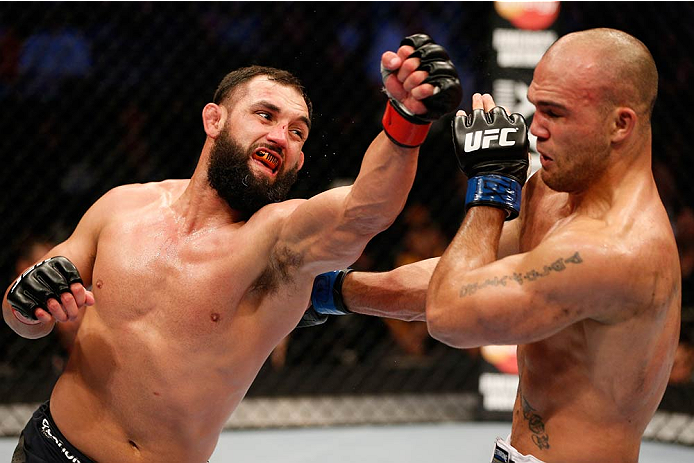 2014 provided more than its share of thrills, and when it comes to the best fights of the year, here are ten of the most memorable…

10 – Cathal Pendred vs. Mike King
You’ll have to go back and watch the Cathal Pendred-Mike King bout again to count how many times Ireland’s Pendred was nearly finished in the opening round before he came out for the second frame and not only got himself back in the fight, but finished it, putting King to sleep with a rear naked choke. It was clearly one of the greatest comebacks ever put together in the Octagon.

9 – Dan Henderson vs. Mauricio “Shogun” Rua II
There was no way Dan Henderson and Mauricio “Shogun” Rua could possibly match or surpass their first bout in 2011, one widely considered to be on the short list of greatest MMA fights of all-time. But they gave it a heck of an effort in March, and what the bout lacked in frenetic action, it compensated with drama, and after falling behind early, “Hendo” landed the finishing H-Bomb in round three, earning Performance and Fight of the Night honors.

8 – T.J. Dillashaw vs. Renan Barao
There are title fight wins and then there’s TJ Dillashaw’s victory over Renan Barao at UFC 173 on May 24. In one of the great performances in mixed martial arts history, the underdog from California put on a master class against Brazil’s Barao, a fighter who entered the Octagon that night having gone unbeaten in his previous 35 bouts. That didn’t matter to Dillashaw though, as he did everything right, racing out to a lead on the scorecards but refusing to sit on it, turning it up a notch in the fifth round to stop the seemingly unstoppable Barao and take the UFC bantamweight championship.

7 - Robbie Lawler vs. Matt Brown
When the welterweight bout between Robbie Lawler and Matt Brown was announced, the entire fight world rejoiced. So, of course, it couldn’t possibly live up to the hype, right? Wrong. For five rounds, two of the most intimidating figures in the game stared each other down and dared to take each other’s best shot. Lawler, who would go on to take the UFC welterweight title a few months later, said it best after his decision win. “He (Brown) went toe-to-toe with me and not many guys would do that.”

6 - Chris Weidman vs. Lyoto Machida
For the first couple rounds of UFC 175’s main event between middleweight champion Chris Weidman and challenger Lyoto Machida, I thought to myself “there’s a lot of drama in this fight, but I don’t know if I’d watch it again.” Then from round three on, the action began to match the level of drama, and as you saw Machida pick up the pace in order to try and finish Weidman while the champion held off this charge and fired back his own bombs en route to a close, but unanimous, decision win, the die was cast: I was definitely watching this one again.

5 - Jamie Varner vs. Abel Trujillo
After a less than thrilling UFC 169 preliminary card, lightweights Abel Trujillo and Jamie Varner made up for everything in seven minutes and 32 seconds of the main card opener, going to toe-to-toe for a round and a half before Trujillo ended matters with a stunning second-round knockout. With each fighter taking turns rocking the other, it was clear that this one wasn’t going the distance, but just when it looked like Varner was on the verge of a stoppage win, a flush right hand sent the former WEC champion down to the deck face first, ending the bout.

4 - Matt Brown vs. Erick Silva
When it comes to intensity, few competitors have it quite like Matt Brown, and when you add in fighting in front of his friends and family in Cincinnati on May 10, it was clear that no one – not Erick Silva, not anyone – was going to beat “The Immortal” in the UFC Fight Night main event. Brown would have to survive some rocky moments thanks to Silva’s body shots and ground game, but when he got back to his feet, it was a hundred percent go until he wore down his courageous foe and stopped him at 2:11 of the third round.

3 – Junior Dos Santos vs. Stipe Miocic
As you’ll read in his UFC.com profile piece next week, Shawn Jordan discusses something known as a “heavyweight thing.” That “thing” is that when you get 230 to 250-pound men in the Octagon with four-ounce gloves on, one swing can end things in an instant. Junior Dos Santos and Stipe Miocic have that kind of power, but somehow after taking copious amounts of each other’s thunder for 25 minutes, these two stalwarts remained standing, leaving us with an instant classic (won by JDS via decision) that proved once more why the world loves heavyweights.

2 – Jose Aldo vs. Chad Mendes II
After getting knocked out in a single round of his first championship match against Jose Aldo in 2012, Chad Mendes has a huge mountain to climb to get back to a featherweight title fight and he did just that, winning five straight to earn a rematch against Aldo in Brazil on October 25. This wasn’t the same fighter though, and this most certainly wasn’t the same fight. This time around, it was war, 25 minutes worth, and though Aldo retained his belt again, the Brazilian knew he was in a fight the second time around.

1 - Johny Hendricks vs. Robbie Lawler I
The disappointment of Johny Hendricks’ November 2013 loss to Georges St-Pierre vanished in the space of two words at the American Airlines Center on March 15: “AND NEW…” And when Bruce Buffer said those words, declaring Hendricks the new UFC welterweight champion after a five-round classic with Robbie Lawler, the 170-pound division had its new king, someone who many believed should have had that crown last year after his controversial split decision defeat to GSP, who later vacated the belt. But if you ask Hendricks, he will undoubtedly say that finally getting the belt was worth the wait, even if he had to walk through fire to get it.