The Highly Unofficial awards season concludes with the best fighters of 2014... 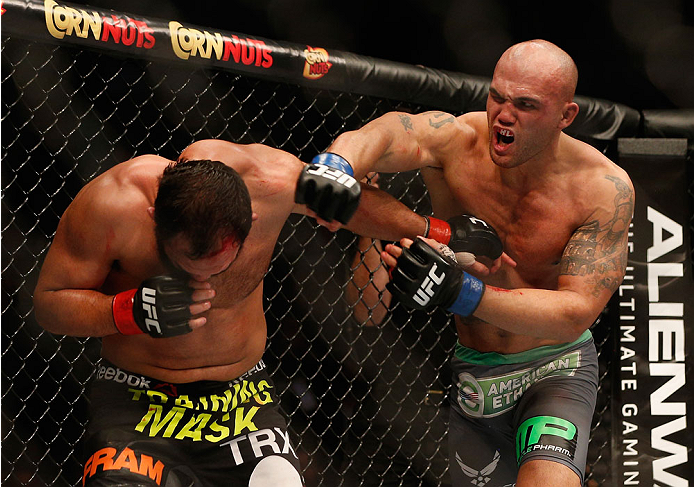 This is it – the Highly Unofficial awards season is coming to a close, and all that’s left is to determine the top fighters of 2014. Will your favorite be here? Read on to find out.

10 - Neil Magny
A member of the much-maligned Ultimate Fighter 16 cast, Neil Magny cemented his place on the welterweight roster in 2014 with a run in which he tied Roger Huerta for most UFC wins in one calendar year, going five for five with victories over Gasan Umalatov, Tim Means, Rodrigo de Lima, Alex Garcia, and William Macario. Next stop? The top ten.

9 – Max Holloway
Perhaps the quietest entrant on this list, Hawaiian young gun Max Holloway stepped up to the plate four times in 2014 and won each bout he engaged in. But more notably, the 23-year-old finished each opponent, submitting Andre Fili and knocking out Will Chope, Clay Collard and Akira Corassani. Now that’s impressive.

8 – Rafael dos Anjos
2014 could not have gotten off to a worse start for Rafael dos Anjos, who was shut out in an April bout against Khabib Nurmagomedov. But the talented and resilient Brazilian bounced back in emphatic fashion in his next three bouts, knocking out Jason High and former world champion Benson Henderson before ending the best year of his career with a shutout of his own against Nate Diaz in December.

7 – Fabricio Werdum
Fabricio Werdum’s return to prominence after a disappointing end to his first UFC run wasn’t as dramatic as Robbie Lawler’s, but it was just as significant, and in 2014, Werdum followed up a dominant five-round win over Travis Browne with a November knockout of Mark Hunt that earned him the interim UFC heavyweight title. In 2015, Werdum may own the top spot on this list if he can topple Cain Velasquez.

6 - Luke Rockhold
Former Strikeforce middleweight champion Luke Rockhold got off to a rough start in his UFC career in 2013, getting knocked out in the first round by Vitor Belfort. But since then, Rockhold has campaigned for a rematch with “The Phenom” in the best way possible – by winning. In 2014, Rockhold picked up his first three Octagon victories, knocking out Costas Philippou and submitting Tim Boetsch and Michael Bisping.

5 - Rory MacDonald
In 2013, highly-touted welterweight phenom Rory MacDonald lost a possible crack at the 170-pound title when he dropped a decision to Robbie Lawler. In response, the Canadian scored a come from behind Fight of the Night win over Demian Maia in February, then put on a clinic against Tyron Woodley in his British Columbia backyard in June before capping the year with an October stoppage of Tarec Saffiedine. Now he’s knocking on the door for a shot at the belt once more, and this time no one doubts that he’s ready for it.

4 - Donald Cerrone
Sure, Donald Cerrone is a slow starter and he’s fallen short in some of his biggest fights, but in 2014, dare we say that “Cowboy” matured? Four wins in four fights, with three finishes and three post-fight bonuses speak volumes for the lightweight contender, especially when those victories have come against Adriano Martins, Edson Barboza, Jim Miller, and Eddie Alvarez.

3 – T.J. Dillashaw
T.J. Dillashaw’s January decision win over Mike Easton was impressive enough, but his knockout of Renan Barao in May to win the UFC bantamweight title was on a whole other level. Barao, who entered the UFC 173 bout with a 35-fight unbeaten streak, was starting to reach invincible status in the Octagon. Dillashaw put that talk to rest for the moment with a stellar effort from start to finish. It was such a dominating performance that you almost forget that the new bantamweight champ finished off the year with another win, a finish of Joe Soto in August.

2 - Ronda Rousey
In two fights against world-class competition, Ronda Rousey spent a grand total of 82 seconds in the Octagon in 2014. How can “Rowdy” Ronda not be up here. Yet what may be most impressive about the UFC women’s bantamweight champion’s defeats of Sara McMann and Alexis Davis is that she finished both without her trusty armbar, instead knocking out each fighter in the opening round. “Rowdy” Ronda is scary, especially since she seems to be getting better with each fight.

1 – Robbie Lawler
If you’ve covered MMA for a while, let’s say before Griffin-Bonnar I in 2005, Robbie Lawler winning the UFC welterweight title was one of those moments where you put aside any objectivity and smiled. Lawler was once the poster child for excitement on fight night, the guy you put aside any other plans to see when he put the gloves on. Then he became the poster child for unfulfilled potential. But beginning in 2013, and culminating with a 2014 campaign in which he defeated Johny Hendricks, Jake Ellenberger and Matt Brown, Lawler is now the guy you look to when you want to tell someone about the power of perseverance. “Ruthless” can go on to reign for six years or six months, and it really doesn’t matter, because 2014 will always be the year of his fighting life he’ll never forget. And neither will we.