The submission. It’s not only a way to attack in the Octagon, it can also be the great savior, the combat sports version of a walk-off home run. And when done perfectly, it’s a thing of beauty. Here are ten of the best from 2018 as the highly unofficial awards season marches on.

1 - Ryan Hall-BJ Penn (WATCH ON UFC FIGHT PASS)
A late entry for the list, Ryan Hall earned the top spot on the final card of the year last weekend, as he submitted a former Brazilian Jiu-Jitsu world champion in BJ Penn. Then again, this wasn’t an accident from the high-level BJJ black belt, but another example why his leg locks are among the best – if not the best – in MMA. Fast, devastating, and decisive, Hall broke open a close fight and ended it within seconds with a heel hook on a UFC Hall of Famer.

2 - Paul Craig-Magomed Ankalaev (WATCH ON UFC FIGHT PASS)
Scotland’s Paul Craig was moments away from retirement as Magomed Ankalaev put him on the canvas, seemingly about to secure his first UFC win at Craig’s expense. But in the miracle comeback of all miracle comebacks, Craig threw up a triangle choke and forced Ankalaev to tap out. The time of the victory, which earned Craig a Performance of the Night bonus and a new UFC contract? 4:59 of round three.

3 – Aljo and Zabit bring the pain in Dallas
(WATCH STERLING-STAMANN)
(WATCH MAGOMEDSHARIPOV-DAVIS)
No submission is comfortable for the one on the receiving end of it, but some appear to be more painful than the others. Enter the Suloev Stretch (named after UFC / PRIDE vet Amar Suloev), a kneebar-like hold that will do (bad) wonders to your hamstrings. On September 8 in Dallas, the rare submission was pulled off not just once, but twice, with Aljamain Sterling finishing Cody Stamann and Zabit Magomedsharipov ending Brandon Davis’ night in emphatic fashion. So how do we separate the two victors on this list? We don’t. Let’s just call it a tie for number three.

4 - Aleksei Oleinik-Junior Albini (WATCH ON UFC FIGHT PASS)
A prime example of the adage that life begins at 40, Aleksei Oleinik continues to impress at 41. So if you’re wondering if he was going to slow down, just go back to May, when he picked up yet another submission to remember, finishing Junior Albini with the Ezekiel choke that is rare to everyone but “The Boa Constrictor,” who has used it to finish 11 – yes, 11 – opponents. 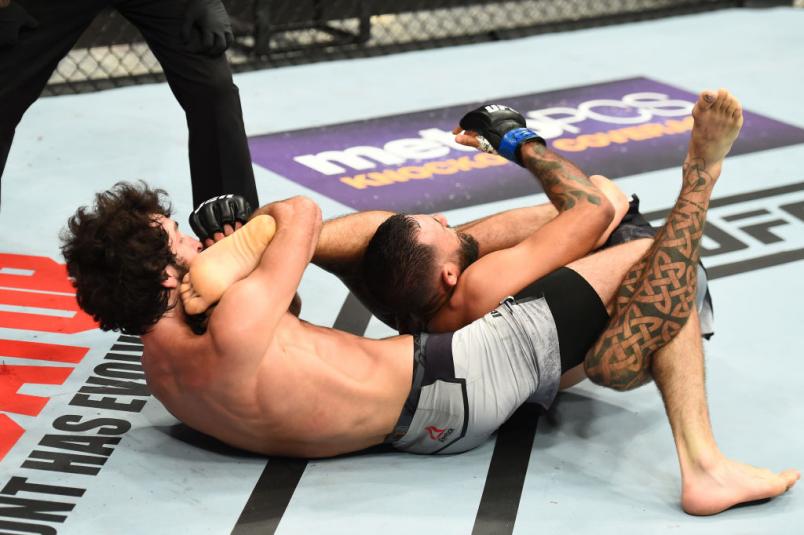 5 – Charles Oliveira-Christos Giagos (WATCH ON UFC FIGHT PASS)
Royce Gracie was the original submission master in MMA, and the fact that his UFC submission record lasted for over two decades speaks volumes. But all sports records are made to be broken, and I’m sure Gracie is happy that if it had to fall, it was a fellow Brazilian that now holds the mark. In September, Charles Oliveira finished Christos Giagos with his trademark rear naked choke, making it 11 submission wins in the Octagon and establishing “Do Bronx” as the UFC’s all-time submission king.

6 – Adam Wieczorek-Arjan Bhullar (WATCH ON UFC FIGHT PASS)
I’m no jiu-jitsu player, but just from watching fights for over 20 years, I’m of the opinion that the omoplata is one of the most complex submissions to pull off, and the numbers may back that up, as Adam Wieczorek’s finish of Arjan Bhullar in April was only the second in UFC history. And like the best subs, this one creeps up on an opponent, and by the time it’s locked on, it’s too late. A thing of beauty.

7 – Ilir Latifi-Ovince Saint Preux (WATCH ON UFC FIGHT PASS)
Like knockouts, submissions come in all varieties, and while we can celebrate clean technique and slick maneuvering, there is always a place for raw power, and that’s what Ilir Latifi showed when he locked in the standing guillotine that ended Ovince Saint Preux’s night in February. Sledgehammer indeed.

8 – Claudio Puelles-Felipe Silva (WATCH ON UFC FIGHT PASS)
Highly touted Claudio Puelles was upset in the TUF LATAM 3 finals in 2016, and nearly two years later, he was on his way to another crushing defeat against Brazilian banger Felipe Silva in May before pulling off a miracle kneebar that ended the bout at 2:23 of the third round. And while it may not have been cutting it as close as Craig’s finish of Ankalaev, there was no shortage of drama in this one for the 22-year-old from Peru.

9 - Darren Elkins-Michael Johnson (WATCH ON UFC FIGHT PASS)
It was a typical Darren Elkins fight. The Indiana gritmaster fell behind early, on the receiving end of an offensive assault by Michael Johnson. But in the second round, like he has so many times before, Elkins roared back, kicking off his 2018 campaign with a Performance of the Night rear naked choke finish of “The Menace.”

10 – Donald Cerrone-Mike Perry (WATCH ON UFC FIGHT PASS)
In 25 years of the UFC, no one has finished more fights than Donald “Cowboy” Cerrone. Think about that for a minute. So how could we not acknowledge Cerrone’s armbar finish of Mike Perry in November? It was Cerrone at his best, and when it was over, he had his 15th UFC finish, moving him past Anderson Silva and Vitor Belfort. Oh yeah, he also set the mark for most UFC wins, with 21. That’s some night for “Cowboy,” who also pulled this all off in his hometown of Denver.