"I want to keep the ball rolling and take every opportunity I can and enjoy the time while it's here. I've worked all my life to get where I am now and I know this is only the beginning." - Diego Ferreira 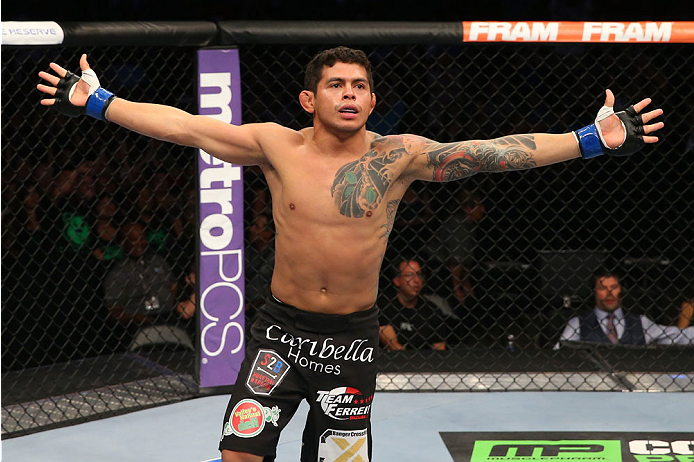 It was the offer Diego Ferreira couldn’t refuse. Sure, a UFC 179 fight against Beneil Dariush was on short notice, but when the opportunity included a chance to pick up his third win of the year and to do it while fighting in his native Brazil for the first time, he was all-in.

“That was also one of the reasons,” he laughs. “But it didn't matter where the fight was, I felt ready. But yes, I'm very excited to fight in my country; it's gonna be awesome.”

As for the other reasons why he stepped in for the injured Alan Patrick, just look at what he’s done as a member of the UFC roster thus far. In June, he took just 38 seconds to submit Ultimate Fighter 16 winner Colton Smith and earn a Submission of the Night bonus. Two months later, he knocked Ramsey Nijem out in the second round in UFC 177’s Fight of the Night, and while most of us civilians would follow up those two efforts with a vacation, the unbeaten Ferreira wants to strike while the iron is hot.

“I just want to keep active,” he said. “I've been training a lot and I felt good and ready. I want to keep the ball rolling and take every opportunity I can and enjoy the time while it's here. I've worked all my life to get where I am now and I know this is only the beginning.”

You could call 2014 the Year of the Worker, with fighters like Donald Cerrone and Neil Magny leading the way as the idea is that if you’re healthy, well, then fight as much as you possibly can. The 29-year-old Ferreira is on board with that philosophy, and while he was a relative unknown to UFC fans when the year began, that’s not the case any longer, and he couldn’t be more thrilled with the way things have gone so far.

“It's been so great,” he said. “I'm so happy to be fighting in the UFC and I'm going to keep doing my best to put on a good show for the fans.”

He hasn’t disappointed yet. Respected by hardcore fans for years, the Texas-based Brazilian fought his entire pro career in his adopted home state, beating the likes of Carlo Prater and Jorge Patino along the way. Then came the call to the UFC, and while his black belt level jiu-jitsu game was on full display in his debut against Smith, his fists did the talking against Nijem.

“It was such a great feeling,” Ferreira said of his knockout win. “I've been working so hard on my stand-up for that to come and I've continued to train even harder in both my ground and stand-up to be ready for every type of fighter.”

And even with just 11 pro fights, he looks like someone who will be a serious threat in the lightweight division for a long time.

“It's one of the biggest divisions,” he said of the 155-pound weight class. “There are so many fighters and some of the biggest names in MMA. I see myself getting to the top real soon, and that's why I will work real hard for this to make my way up.”

He’s not overlooking Dariush in search of glory though. A dangerous ground fighter in his own right with two UFC submission wins thus far, the 25-year-old southpaw showed some thunder in his hands as well when he rocked Charlie Brenneman before submitting him in January. Ferreira is ready for anything and everything on Saturday night.

“He has a good ground game and he's a good boxer and a southpaw, so I have to be careful and aware at all times,” Ferreira said of his opponent, and even with all the right things being said, you have to assume that in his head, the Careiro da Várzea native can’t fathom losing on Saturday – not in the UFC 179 main card opener, and certainly not in his first fight in Brazil, where his mother and son will be able to see him in action.

“I'm very excited to fight in Brazil,” he said. “I’m happy that this is happening in the beginning of my UFC career. Everything has just been going great from the start and the fans can expect everything; I want to put a good show like always and this one won't be any different.”