Before Gerald Meerschaert entered the Octagon, the jiu-jitsu black belt was already a veteran of the fight game.

Meerschaert’s UFC debut was his 34th fight as pro, and since making his debut in January 2007, he had been putting in work on the regional scene of Wisconsin and in various places around North America, amassing a record of 26-8. That experience and mat time translated flawlessly to the UFC when he finally made his Octagon debut in 2016.

With 26 wins by submission and six wins by KO, Meerschaert has shown that he is a complete fighter, but he finds himself in an elite class of submission artists, as he’s tied for fifth place with heavyweight Frank Mir for most submissions in UFC history with eight total. That makes “GM3” one submission shy of tying Nate Diaz for 4th place. Before he makes his Octagon return in an attempt to extend his three-fight win streak, take a look at the five best submissions from “GM3”. 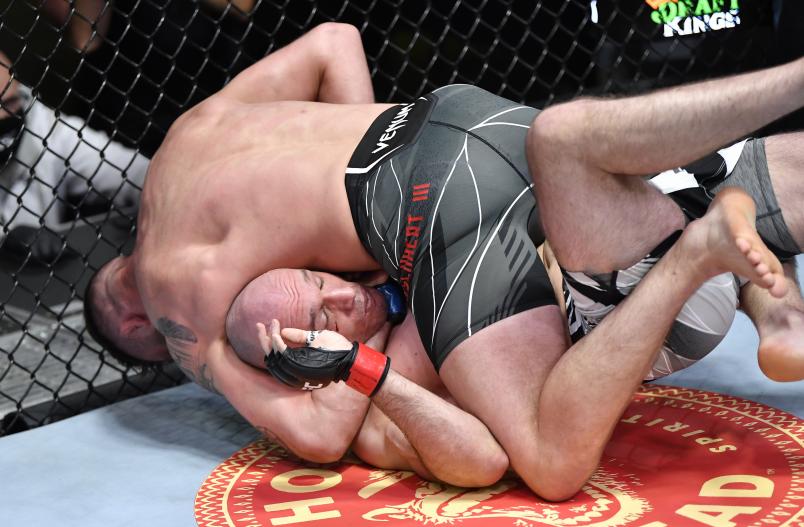 After a brief two fight losing skid, Gerald Meerschaert went back to the drawing board and really tuned everything up. He told commentators that week that he had never had this much time to prepare for a fight, and that preparation reflected in his performance. “GM3” came out the gates hot, trading heavy shots with Fabinski. The Polish fighter was the one pressing forward, but it wasn’t long until Meerschaert would secure both underhooks and put Fabinski’s back against the cage. Meerschaert and Fabinski would fight in the clinch against the cage for a few minutes with Meerschaert mainly controlling the position.

Fabinski eventually shot in for a double leg takedown. Leaving his neck exposed in the process, Meerschaert responded to the opening with a guillotine choke. Fabinski fought the position for a few moments, but there’s no escape from Meerschaert once he has you in deep waters on the ground. “GM3” put Fabinski to sleep to bounce back in the win column and start his climb back up the 185-pound division. 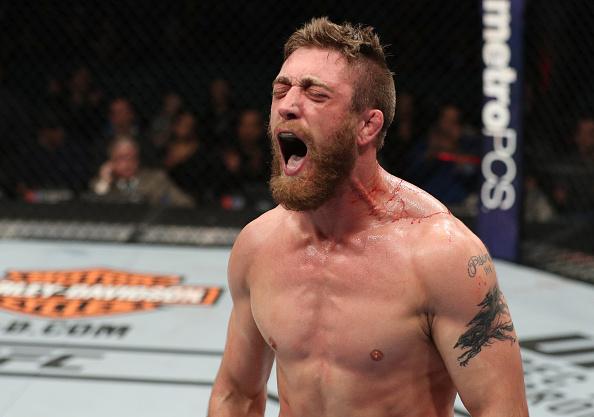 ALBANY, NY - DECEMBER 09: Gerald Meerschaert celebrates after his submission victory over Joe Gigliotti in their middleweight bout during the UFC Fight Night event at the Times Union Center on December 9, 2016 in Albany, New York. (Photo by Patrick Smith/Zuffa LLC/Zuffa LLC via Getty Images)

After competing on the regional scene for 10 years, Meerschaert finally made his UFC debut. Meerschaert would be replacing Oluwale Bamgbose to face Joe Gigliotti. Immediately, you see could how much the experience of Meerschaert was paying off. Once the fight got started, he was calm and relaxed. He used his eight-inch reach advantage perfectly against Gigliotti, never allowing the 185-pounder a chance to get comfortable.

Meerschaert caught a low kick from Gigliotti and initiated the clinch against the cage. Meerschaert controlled the position and peppered in a few elbows that eventually cut his opponent. During another grappling scramble, Meerschaert hit Gigliotti with a judo throw and was able to secure the back with both leg hooks. Fighting for a rear naked choke, Meerschaert transitioned to an anaconda choke and force Gigliotti to tap out. The debut win also earned Meerschaert his first Performance of the Night bonus. 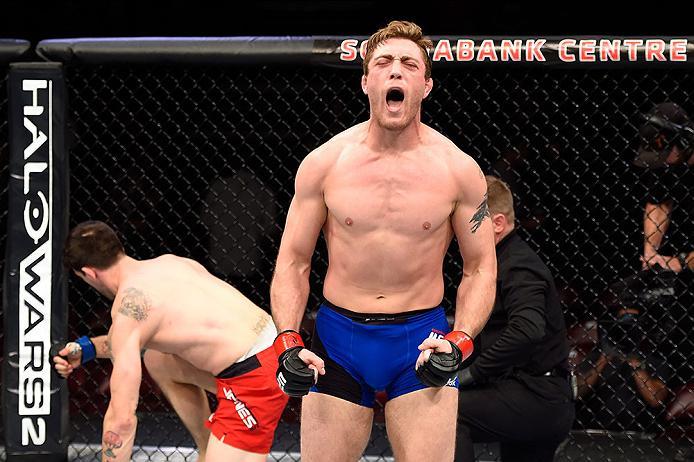 For his second UFC fight, Gerald Meerschaert was tasked with fighting Ryan Janes at UFC Fight Night. The bout was taking place in the Scotiabank Centre and Janes was the hometown fighter. Even while entering enemy territory, Meerschaert kept his trademark composure.

Janes actually found success against “GM3” early in the fight. He landed powerful strikes and even took Meerschaert down. For any other person, being on your back in a fight can be the beginning of the end. However, for a jiu-jitsu black belt like Meerschaert, this is just another position where he can finish a fight. While Janes continued to rain down punches on the Wisconsin grappler, Meerschaert was able to throw his legs up and quickly secure an armbar submission. Before the crowd could even realize what had happened, Janes had tapped out to avoid any further damage. Meerschaert made good on his promise of delivering a highlight reel finish while leaving the crowd in Nova Scotia stunned in silence. 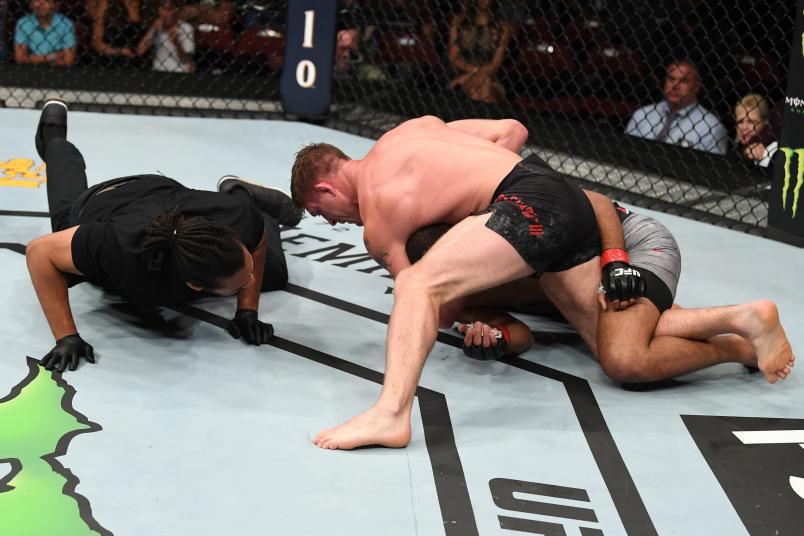 After falling short to Kevin Holland and Jack Hermanson, it was time for Meerschaert to go back to the drawing board and change a few things. Revamping his strength and conditioning routine, Meerschaert’s evolution as a fighter was starting to physically show. The fight against Giles was long and grueling, but it allowed Meerschaert to show his grit and heart.

Giles was able to land the right hand effectively on multiple occasions. Towards the end of the first round, he threatened Meerschaert with an anaconda choke but wouldn’t get the chance to finish the submission since the round ended.

The second round was similar to the first. Meerschaert and Giles were constantly grappling and fighting for the better position. This time around, “GM3” was able to end the round on top and landed some solid ground-and-pound in the process. The tide was starting staring to turn as Meerschaert found more success. In the third round, after initiating another grappling exchange, Meerschaert was able to secure the neck of Giles and sink in a guillotine choke. Giles fought the submission and even made his way back to his feet, but Meerschaert refused to let go until the fight was over. 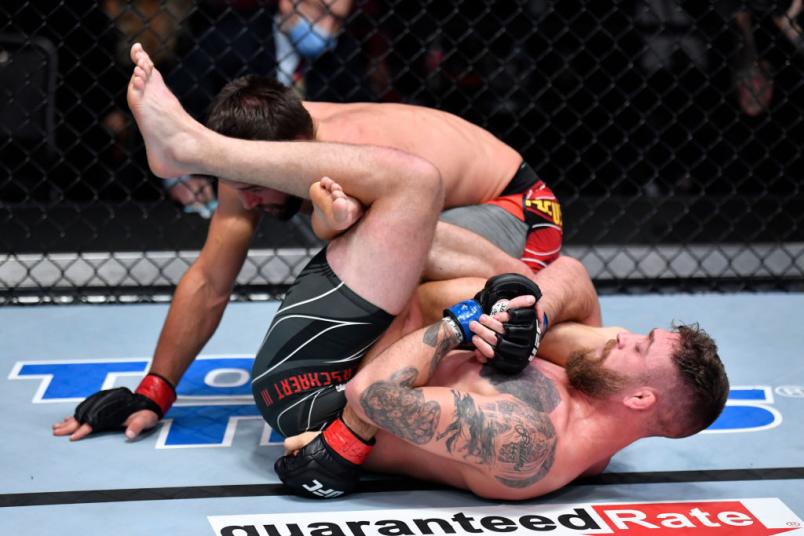 Gerald Meerschaert works for an arm lock against Dustin Stoltzfus in their middleweight fight during the UFC Fight Night event at UFC APEX on December 18, 2021 in Las Vegas, Nevada. (Photo by Jeff Bottari/Zuffa LLC)

With two back-to-back submission wins, Meerschaert was returning to the Octagon to take on Dustin Stoltzfus. While Stoltzfus was coming off two losses, the Pennsylvania fighter was a formidable opponent whose last five wins ended by either knockout or submission.

For the first round, the control time on the ground between the pair was basically identical with two minutes each. The most notable moment of the round was when Meerschaert threatened Stoltzfus with an armbar submission. But Stoltzfus was able to survive the submission attempt and force a second round. The second round was controlled by Stoltzfus as he dominated the grappling exchanges.

After Meerschaert’s corner called for a sense of urgency, he was suffocating with his grappling pressure. Midway through the third round, Meerschaert secured his opponent’s back and successfully executed a rear naked choke for another hard-fought victory. Increasing his winning streak to three, and doing so on his birthday, Gerald Meerschaert showed that he’ll continue to be a threat in the 185-pound division.