Owner of an enviable resume that includes victories over six former UFC champions and four UFC Hall of Famers, “The Dragon” is best known for his unique fighting style, which helped lead him to a number of impressive wins in the Octagon. Here are the Top Five. 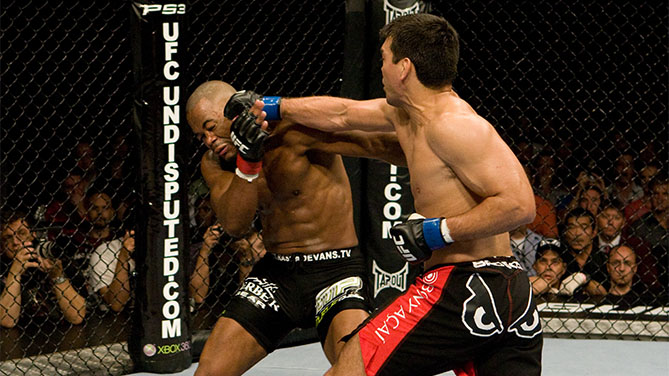 May 2009 - Rashad Evans (Watch on UFC FIGHT PASS)
When he arrived in the UFC in 2007, Lyoto already had impressive victories on his record over names like Stephan Bonnar, Rich Franklin and BJ Penn. Therefore, it didn’t take him too long to find himself among the top contenders in a deep light heavyweight division. After collecting four wins in his first UFC year, Lyoto followed it with wins over former champion Tito Ortiz and his fellow Brazilian Thiago Silva on the way to a title shot, which came against recently crowned and still unbeaten Rashad Evans in 2009. It was a fight in which “Suga” had no chance, as he suffered a highlight reel knockout loss in the second round.

April 2011 - Randy Couture (Watch on UFC FIGHT PASS)
After losing his belt to Shogun Rua and being defeated by Rampage Jackson by way of a controversial decision, Lyoto was chosen as Randy Couture’s final opponent. Of course, “The Natural” wanted a memorable farewell from the Octagon, and Machida helped him have that, but it wasn’t exactly the memory Couture was looking for. Machida put an end to the Hall of Fame career of Couture with the legit “Karate Kid” kick that will also remain forever among the highlights of the UFC.

August 2012 - Ryan Bader (Watch on UFC FIGHT PASS)
The spectacular knockout over Couture put Lyoto once again in the position to challenge for the title, but this time the Brazilian ended up being submitted by Jon Jones. His comeback fight was against Ryan Bader and he turned doubters of his karate-based style into believers when Lyoto dodged from “Darth” Bader’s strike and quickly countered with a fast, nasty right hand that immediately put the American to sleep.

October 2013 - Mark Muñoz (Watch on UFC FIGHT PASS)
A loss to Phil Davis in 2013 ended Machida’s tenure as a light heavyweight in the UFC and, less than three months later, the Dragon was making his debut as a middleweight and fighting his former training partner Mark Muñoz. In only his first bout in the division, Lyoto proved he had taken his agility and knockout power with him despite the bigger weight cut, and he finished Muñoz with a vicious head kick and ended the bout showing true sportsmanship and martial arts spirit by refusing to land a second punch as he noticed his opponent was out.

December 2014 - CB Dollaway (Watch on UFC FIGHT PASS)
Two straight wins as a middleweight took Machida to his third title shot in the UFC as he faced Chris Weidman and lost via unanimous decision in July 2014. Once again, the Brazilian soon returned to action, headlining a Fight Night in the city of Barueri, in the state of Sao Paulo, at the end of that year, against CB Dollaway. And once again, he returned strong, finishing “The Doberman” with a kick in the ribs followed by punches. This was, until now, Machida’s last win in the Octagon, something he will try to change this Saturday, again in a main event in Sao Paulo, only this time against Derek Brunson.