With one of the most consistently thrilling catalogs of fights of any major city, it's little wonder that London's O2 Arena sells out in the blink of an eye when the UFC comes to town.

As we get ready to welcome 2020's extravaganza, UFC Fight Night: Woodley vs. Edwards, take a look back at just a few of The Big Smoke's greatest hits.

It was a close one in this 2016 main event between two of the best middleweights of this era, but when the dust settled after five rounds, Michael Bisping had thrilled his London fans with a unanimous decision win over Brazilian icon Anderson Silva. Less than four months later, Bisping got a short notice call to face Luke Rockhold for the middleweight title, and he struck gold, taking the belt via first-round knockout.

One of the few folks in the game you believe would do this for free if MMA didn’t exist, Miami’s Jorge Masvidal scored what was arguably the biggest win of his career to that point when he knocked out Darren Till in front of a stunned O2 Arena. Too many times in the past, Masvidal had fought well enough to lose a close decision. Against Till, he took the win by force, and #TheResurrection was underway.

Conventional wisdom before the UFC 95 bout between welterweights Dan Hardy and Rory Markham dictated that when it came to punching power, Markham was the man to watch out for. Nottingham’s Hardy took issue with such talk, and he responded with his fists as he knocked Markham out in 69 seconds at the O2 Arena.

“No punching power,” said Hardy to the ecstatic crowd. “What do you have to say about that?” 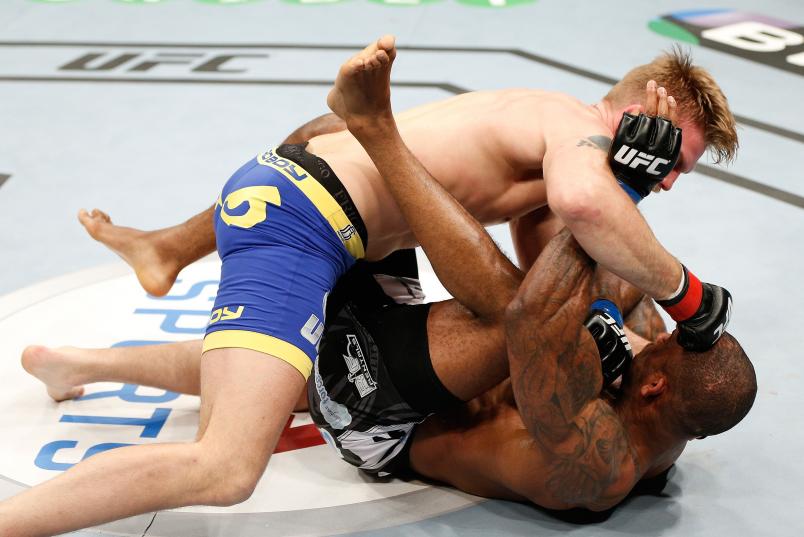 Six months after his epic battle with Jones, Gustafsson returned against someone who would eventually become his teammate, British knockout artist Jimi Manuwa. The stage was set for a post-title fight letdown, but Gustafsson wasn’t having it, as he scored a second-round TKO of the “Poster Boy” that earned him a double bonus. “The Mauler” wasn’t going anywhere.

Welterweight veteran Danny Roberts thrilled his hometown fans with a first-round knockout victory over Sweden’s Oliver Enkamp. Roberts scored with his left hand early in the fight, prompting Enkamp to look for a takedown, but that attempt came up empty, allowing the London native to land another flush left hand. This one sent Enkamp to the canvas, with referee Leon Roberts intervening at 2:12 of the opening frame.

“I feel on top of the world right now,” Roberts would say. “To have that outcome...there’s not many things that can top it so for me. It’s very special. This is where I grew up. The U.K. has molded me into the person I am today, so to be able to come back and give the fans something that they deserve, and to feel the love and respect back from them, it’s electric."