Former UFC middleweight and welterweight title challenger Demian Maia returns to action this weekend for the first time since his loss to Tyron Woodley, as he meets Colby Covington in the co-main event of UFC Fight Night in his hometown of Sao Paulo.

Known for his world-class grappling, the Brazilian takes pride in representing jiu-jitsu in the Octagon and, even though he never hides his game plan of taking his fights to the ground, he’s already managed to collect 19 wins in the UFC. Here are the top five.

February 2009 - Chael Sonnen (Watch on UFC FIGHT PASS)
A multi-time champion in jiu-jitsu both with and without the gi, Demian debuted in the UFC in 2007, still unbeaten in MMA after collecting six dominant wins on the regional circuit. After four more wins inside the Octagon, all by submission, he took another step up in competition and faced Chael Sonnen in 2009. The bout was a real grappling showcase that ended up with the Brazilian finishing the “American Gangster” with a tight triangle choke in the first round.

October 2012 - Rick Story (Watch on UFC FIGHT PASS)
After being defeated by Anderson Silva in a middleweight-title clash and a few more back-and-forth results, Demian decided to move down to 170 pounds in 2012, and in only his second fight in the division, he proved the transition was the right choice, as he finished the tough Rick Story with a nasty neck crank.

December 2015 - Gunnar Nelson (Watch on UFC FIGHT PASS)
Demian’s first setbacks as a welterweight came in the form of Jake Shields and Rory MacDonald, but after taking two steps back, he managed to take many others forward, and three straight wins later, he was scheduled for an all-BJJ black belt matchup against Gunnar Nelson. What was expected to be a close grappling match turned out to be a one-sided showing when he dominated Renzo Gracie’s pupil for 15 minutes.

May 2016 - Matt Brown (Watch on UFC FIGHT PASS)
Following that win, Demian came back to Brazil to face durable veteran Matt Brown, and he made the crowd explode when he locked in a tight rear-naked choke in the final seconds of the bout, forcing the American, who had previously provoked the Brazilian fans during weigh-ins, to tap. 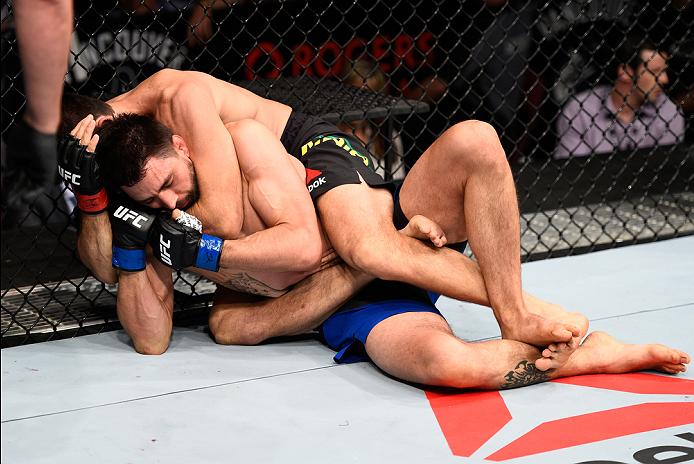 August 2016 - Carlos Condit (Watch on UFC FIGHT PASS)
After five consecutive wins, the Brazilian hoped he would get the call to fight for the belt, but instead he got one of the biggest challenges of his career in former interim champion Carlos Condit for a five-round main event in Canada. But Demian was really going through a special moment in his career and he managed to do what neither Georges St-Pierre nor Robbie Lawler could, finishing the “Natural Born Killer” in under two minutes.

Honorable Mention:
July 2017 - Tyron Woodley (Watch on UFC FIGHT PASS)
It took seven straight wins for Demian to get his well-deserved second title-shot in the UFC, as he faced Tyron Woodley in July for the welterweight crown. The Brazilian tried by every means to implement his game plan and take the knockout artist down, but a cautious Woodley frustrated him and kept the fight standing for 25 minutes, defending his throne and sending Demian back to the line. But he hopes to change that and get right back into the title picture this Saturday against up and coming Colby Covington in Sao Paulo.