On Friday, July 7, a new Ultimate Fighter winner will be crowned in Las Vegas, continuing the tradition started in 2005, when Forrest Griffin and Diego Sanchez left the Octagon as winners of the first season of TUF. For that duo, it was the start of storied UFC runs that landed them on this list of the best fighters to emerge from the reality series. Will next week’s winner follow suit? Only time will tell. 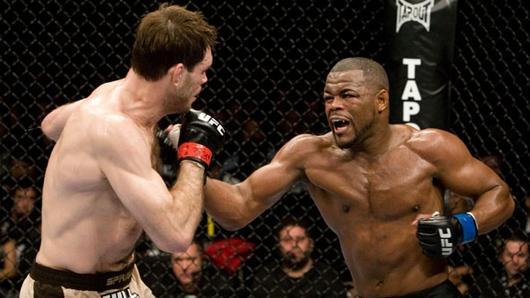 1 - Rashad Evans
An undersized heavyweight with little reputation to precede him, former Michigan State wrestler Rashad Evans wasn’t expected to do much with the giants on TUF2, but four wins later (Keith Jardine, Mike Whitehead, Tom Murphy, and Brad Imes), the New York native had won the show’s title. Evans continued to surprise in his post-TUF career, and though he received a reputation for putting on less than compelling fights early on, by the time he was blasting out Jason Lambert and Sean Salmon, that rep changed. Evans would then engage in two close battles with Tito Ortiz and Michael Bisping, decisioning Bisping and fighting to a draw with Ortiz. Those fights were preludes to a spectacular knockout of Chuck Liddell and a decisive finish of Forrest Griffin that put the UFC light heavyweight championship belt around his waist. Evans lost the title to Lyoto Machida in his first defense, but rebound wins over Thiago Silva, Rampage Jackson, Ortiz (in a UFC 133 rematch), and Phil Davis earned him a shot at the title belt held by former teammate Jonny “Bones” Jones in April of 2012. Evans lost that bout via decision, but he was far from done as a top-flight fighter, as wins over Dan Henderson and Chael Sonnen put him back in the race, and despite a few losses in his last series of bouts, “Suga” expects that he will return to form in his second fight at middleweight this August.

2 – Forrest Griffin
There’s probably no one in the game who would want to avoid the spotlight more than Forrest Griffin, but that became an impossibility when the former police officer won season one of The Ultimate Fighter with a stirring three-round win over Stephan Bonnar that kicked off the MMA explosion in 2005. After that, it was a constant stream of interviews, appearances, and photo shoots for Griffin, who still found time to engage in a memorable war with Tito Ortiz, get upset by Keith Jardine, and rebound to shock Mauricio Rua and Quinton Jackson, the latter bout earning him the UFC light heavyweight crown in 2008. Griffin went on to lose the belt to Rashad Evans and get stopped in a single round by Anderson Silva, but consecutive wins over Ortiz and Rich Franklin put the ever-popular Griffin back on track before Rua got even with a first round TKO victory at UFC 134. Griffin bounced back in July of 2012, decisioning Ortiz in their rubber match. He retired after the bout and was inducted into the UFC Hall of Fame in 2013.

3 – Michael Bisping
The man who put MMA on the map in the UK, Michael Bisping had little difficulty winning on the British circuit, and he continued his winning ways on TUF3 as he took out Ross Pointon, Kristian Rothaermel, and Josh Haynes to win the season’s light heavyweight title. His good fortunes continued in finishes of Eric Schafer and Elvis Sinosic, but his rep took a hit after a controversial decision win over Matt Hamill at UFC 75. Bisping would lose for the first time in his next bout at UFC 78 against Rashad Evans, but his gutsy performance in the razor-thin decision defeat won back some of the fans he lost after the Hamill bout. Losing to Evans prompted Bisping to drop to 185, and three straight wins (Charles McCarthy, Jason Day, and Chris Leben) followed before a devastating knockout loss to Dan Henderson at UFC 100 in July of 2009. Eager to get back in the race, Bisping won 11 of his next 16, including bonus-earning efforts over Denis Kang, Yoshihiro Akiyama and Cung Le and a notable victory over former world champion Anderson Silva. But “The Count” wasn’t done yet, as he took on UFC middleweight champion Luke Rockhold in a short-notice rematch in June of last year, and in less than four minutes he had shocked the world by knocking out Rockhold for the title. He went on to exorcise some more demons last October by evening the score with Dan Henderson to retain his belt for the first time.

4 - TJ Dillashaw
TJ Dillashaw had a rough start to his UFC career when he was knocked out in the TUF 14 bantamweight final by John Dodson. But after shaking off the first loss of his career, Dillashaw took the long road to the top of his division, winning five of six bouts before scoring the biggest upset since Matt Serra beat Georges St-Pierre, knocking out the seemingly unstoppable Renan Barao at UFC 173 in May of 2014 to win the 135-pound world title. After halting Joe Soto in his first title defense, Dillashaw proved that the Barao win wasn’t a fluke, as he made it look easy in halting the Brazilian in four rounds. A controversial decision loss to Dominick Cruz in January of 2016 cost him his belt, but wins over Raphael Assuncao and John Lineker have Dillashaw back in the title picture. 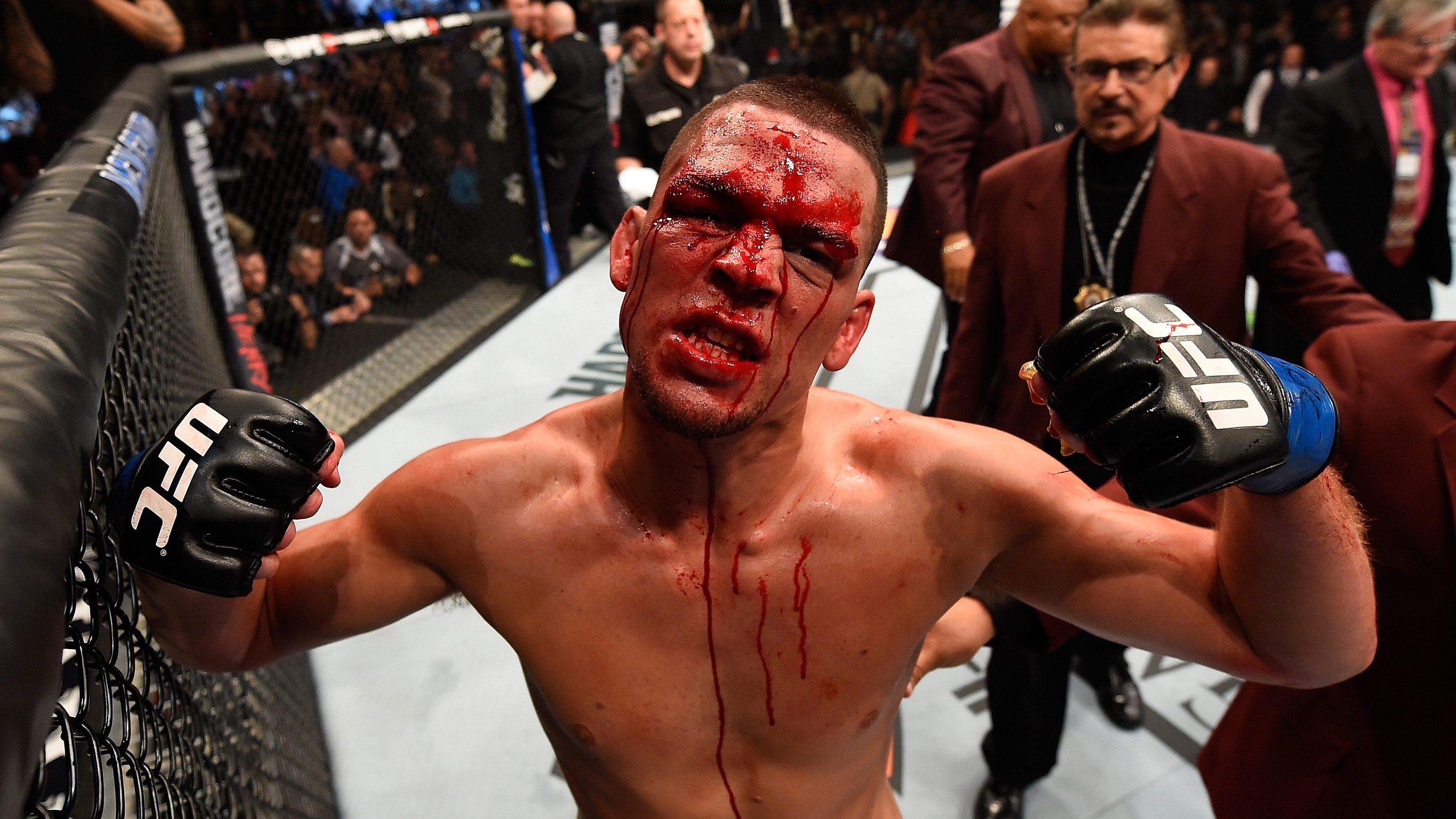 5 – Nate Diaz
With the attitude of a true fighter and good bloodlines (brother Nick is a UFC vet), Nate Diaz was going to make it to the UFC with or without The Ultimate Fighter. But the reality series jump-started the Stockton, California native’s career, and he defeated Rob Emerson, Corey Hill, Gray Maynard, and Manny Gamburyan to win the season five title. He continued his run of success with 13 more Octagon victories, including ultra-impressive wins over Michael Johnson, Takanori Gomi, Donald Cerrone, Maynard and Jim Miller in his return to 155 pounds after a brief stint at welterweight. In December of 2012, he challenged Benson Henderson for the UFC lightweight crown, and though he fell short via unanimous decision, his biggest victory was yet to come, as he submitted Conor McGregor in the main event of UFC 196 in March, captivating the sports world in the process.

6 – Kenny Florian
A fighter who actually caught the eye of UFC President Dana White in a losing effort against Drew Fickett in 2004, Kenny Florian entered the TUF1 house with little fanfare, but he defeated Chris Leben to make it to the middleweight final against Diego Sanchez. Sanchez pounded out a decisive victory over Florian in the finals, and many wondered where KenFlo fit in the great scheme of things. We found out soon enough as he dropped to welterweight and then lightweight, where, after a title fight loss to Sean Sherk in 2006, Florian put together a six-fight winning streak with victories over Din Thomas, Joe Lauzon, Roger Huerta, and Joe Stevenson that earned him a second title shot. And though Florian was submitted in the fourth round by Penn and lost a 2010 bout to Gray Maynard, the New Englander earned a title shot at 145 pounds with a win over Diego Nunes in June of 2011. That title shot against Jose Aldo ended in a decision defeat, and after retiring in May of 2012, Florian is doing excellent work as a studio host for UFC telecasts on FS1.

7 - Tony Ferguson
Finally starting to get the recognition from UFC fans that he’s always deserved, Tony Ferguson has paid his dues and made it to the top, even if the big fight he’s wanted against unbeaten Khabib Nurmagomedov hasn’t materialized yet. In the meantime, Ferguson will continue to go strap hunting, and after compiling a nine-fight winning streak that includes finishes of Edson Barboza, Lando Vannata, Abel Trujillo and Gleison Tibau, and bonus-winning decisions over Josh Thomson and Rafael Dos Anjos, it will be hard to see him as an underdog against anyone at 155 pounds.

8 – Joe Lauzon
After debuting in the UFC in September of 2006 with a stirring 48-second knockout of Jens Pulver, Joe Lauzon didn’t need The Ultimate Fighter as a springboard into the organization, but he took the opportunity to compete with one of the series’ most talent-rich casts anyway. And though he didn’t take the season five title, his post-TUF stint in the UFC has been quite impressive in its own right, as he’s won 13 bouts (all but two by KO or submission) while becoming one of the sport’s premier action heroes and bonus winners.

9 – Diego Sanchez
It’s been a crazy career thus far for season one TUF winner Diego Sanchez, from his early days at welterweight, where he went 4-0 before back-to-back losses to Jon Fitch and Josh Koscheck, to a stint at lightweight where he challenged then-champion BJ Penn for the UFC crown, and then to his resurrection at 170, a return to 155, a brief stay at featherweight, then another visit to 155. The man known as “Nightmare,” then “The Dream,” then “Nightmare” again, then “Lionheart” has always been exciting in the Octagon and nearly as compelling outside the cage. Needless to say, win or lose, odds are that we’ll be talking about him for a long time. 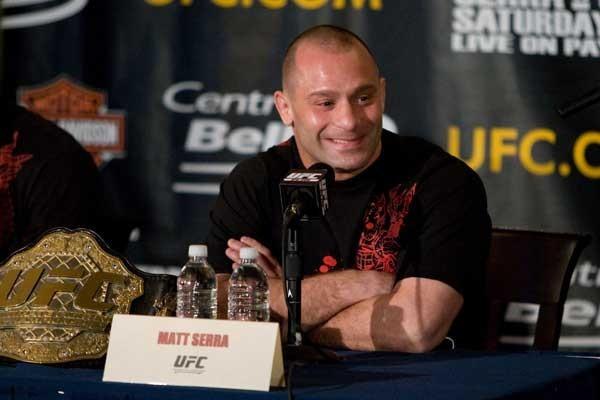 10 – Matt Serra
How does Matt Serra, a guy with a .500 record from the time of his win on The Ultimate Fighter 4 get on this list? Well, first, one of those three wins saw him take the UFC welterweight crown with a knockout of Georges St-Pierre, a man many believe is the greatest welterweight of all-time, and two, one of the losses (a close three-round decision) came to the man who gets the title of greatest welterweight ever from those who don’t choose GSP – Matt Hughes. Add in Serra’s TUF4 finale win over Chris Lytle (a loss Lytle avenged in 2010), his wins on the show over Shonie Carter and Pete Spratt, his UFC victories over Frank Trigg, Yves Edwards and Jeff Curran, and his memorable battles with Carter, BJ Penn, Din Thomas, and Karo Parisyan, and you’ve got a body of work that certainly warrants his place among the best fighters ever to emerge from The Ultimate Fighter.