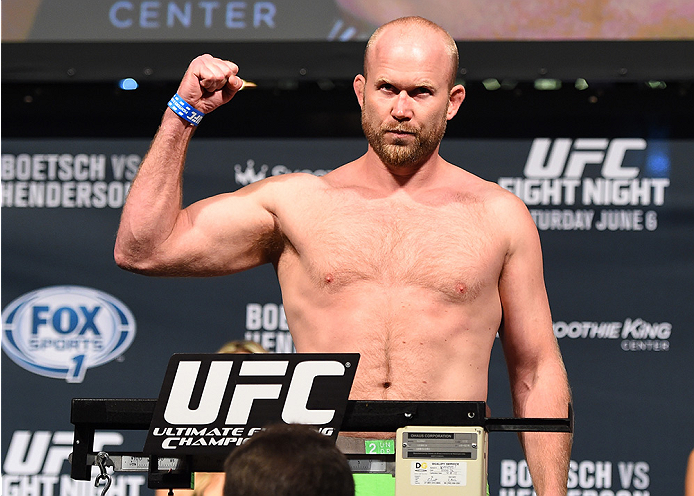 It may be hard to believe these days, but before the explosion of mixed martial arts, the top fighters in the game, at least in the United States, were often centered in either California or in the Midwest hotbed of Iowa, with little attention being paid to fighters from the east coast. But then came a group of fighters out of New England that helped put their region on the map while also building a community of MMA fans that are likely to be out in force when the UFC ships up to Boston for the FOX Sports 1 event on January 17.
Boston fight card

Tim Boetsch
A native of Lincolnville, Maine, middleweight contender Tim Boetsch returned to his New England roots when he began working with Marcus Davis in 2014, and that relationship paid immediate dividends when Boetsch scored a come from behind knockout of Brad Tavares that took place in Bangor. The always exciting “Barbarian” has made his way through some rough times in the Octagon over the years, and after two losses against Thales Leites and Dan Henderson, he’ll look to do it one more time in Boston when he faces fellow veteran Ed Herman.

Mike Brown
Portland, Maine’s Mike Brown had more than paid his dues during his fight career, and after weathering a series of ups and downs, he earned a shot at the WEC featherweight title held by Urijah Faber on November 5, 2008. On that night, Brown captured lightning in a bottle, knocking out Faber in the first round to become a world champion. After two successful defenses, Brown lost the WEC belt to Jose Aldo, but in 2011 he began the next chapter of his story in the Octagon, where he defeated Nam Phan and Daniel Pineda.

Marcus Davis
One of the UFC’s most popular fighters during his run in the Octagon, Bangor, Maine’s Marcus Davis thrilled fans every time out with his boxing attack and underrated ground game. Losing his Octagon debut in 2005 to Melvin Guillard, the former pro boxer went back to the local circuit to hone his game. When he returned in 2006 he was a changed fighter, winning six straight before a loss to Mike Swick in 2008. Davis would have mixed results in his final seven UFC bouts, but with two Fight of the Night bonuses along the way, “The Irish Hand Grenade” never disappointed his loyal followers.

Kenny Florian
Brookline, Massachusetts’ Kenny Florian first came to the attention of fight fans on season one of The Ultimate Fighter, where he fought his way to the finals against Diego Sanchez. Florian fell short of victory that night in 2005, one of the rare times he did during a stellar 17-fight UFC career that saw him score wins over the likes of Clay Guida, Takanori Gomi, Joe Lauzon, Joe Stevenson, Roger Huerta, Din Thomas, and Sam Stout, while also battling tooth and nail with Jose Aldo, Sean Sherk, and BJ Penn in UFC title fights. Today, the retired “KenFlo” stays in the game as a UFC commentator.

Gabriel Gonzaga
Though born in Rio de Janeiro, Brazil, heavyweight contender Gabriel Gonzaga has become a proud adopted son of the city of Ludlow, Massachusetts, where he has lived with his family for years, teaching jiu-jitsu and mixed martial arts to a new generation. In the Octagon, “Napao” is an exciting finisher best remembered for his head kick knockout of Mirko Cro Cop in 2007. But that was just one of 12 UFC wins for Gonzaga, who most recently decisioned Konstantin Erokhin in December.

John Howard
The man nicknamed "Doomsday" went four for four to start his UFC career, defeating Chris Wilson, Tamdan McCrory, Dennis Hallman, and Daniel Roberts. The Muay Thai machine would drop his next three to Jake Ellenberger, Thiago Alves, and Matt Brown, but after winning six of his next seven, the born and bred Bostonian returned to the Octagon in 2013, and he has since gone 3-4 with wins over Uriah Hall, Siyar Bahadurzada and Cathal Pendred.

Joe Lauzon
An exciting competitor whose only goal in the Octagon is to finish fights, lightweight standout Joe Lauzon approaches submissions the way many fighters approach knockouts. And Bridgewater’s “J-Lau” has delivered repeatedly over the years, finishing 11 of his 12 UFC wins, making him one of MMA’s premier action heroes. In fact, he has already surpassed Anderson Silva as the UFC's all-time bonus king. Maybe the UFC should start calling these post-fight awards "The Lauzons."

Tom Lawlor
An entertaining member of the Ultimate Fighter season eight cast whose Octagon entrances and weigh-in attire always cause a stir, Fall River, Massachusetts native Tom Lawlor always shows up to fight, and more often than not, he emerges with his hand raised. Owner of six UFC wins thus far, he picked up his first Knockout of the Night award in 2012 with a 50-second finish of Canadian veteran Jason MacDonald, and in his most recent bout, he left Chicago with a Performance of the Night bonus for his second-round knockout of Gian Villante.

Jorge Rivera
One of New England’s finest fighters, Milford, Massachusetts’ Jorge Rivera faced the best the 185-pound division had to offer for over a decade, including Anderson Silva, Rich Franklin, Travis Lutter, David Loiseau, Nate Quarry, Chris Leben, Martin Kampmann, Michael Bisping, and Costa Philippou. Yet more important than wins and losses, Rivera is best remembered for his fighting spirit, and this was never more evident than in his final fight in January of 2012, when he scored a second-round TKO of Eric Schafer and went out on top and on his own terms.

Glover Teixeira
Born in Brazil, Glover Teixeira has made a home for himself and his family in Danbury, Connecticut, where he has opened a gym to teach the next generation of mixed martial artists. In the Octagon, Teixeira is one of the light heavyweight division’s best, going 22-2 after a 2-2 start to his career. Currently on a two-fight winning streak that has seen him submit Ovince Saint Preux and stop Patrick Cummins, Teixeira sits at number five in the UFC rankings at 205 pounds.