It’s hard to believe that it was just over seven years ago that only a segment of the hardcore MMA fanbase outside of the European scene knew of Ireland’s Conor McGregor. Today, he is an international superstar, the first fighter in UFC history to hold two titles simultaneously, and, on January 23, the man who will continue on his road back to the lightweight crown when he faces Dustin Poirier in a long-awaited rematch that headlines UFC 257.

So how did this all happen? Let’s find out.

Diehard fight fans knew about confident Dubliner Conor McGregor before his UFC debut in April of 2013, but few expected him to become the phenomenon he did – at least not as quickly as he took over the MMA world. But if you’re looking for the way to make a UFC debut, “The Notorious” one nailed it against Marcus Brimage, knocking the American out in the first round after Brimage took McGregor’s pre-fight trash talk as a personal attack and rushed the Irishman. 67 seconds later, a star was born. (Watch on UFC FIGHT PASS)

Originally slated to face Andy Ogle in an all-Europe battle, McGregor got an even more imposing assignment in Hawaii’s Max Holloway in Boston, and disaster almost struck when the highly touted McGregor tore his ACL during the bout. Gutting it out against a dangerous foe, McGregor still found a way to win, taking a three-round unanimous decision. Unfortunately, he would be put on the shelf for nearly a year due to the knee injury. (Watch on UFC FIGHT PASS) 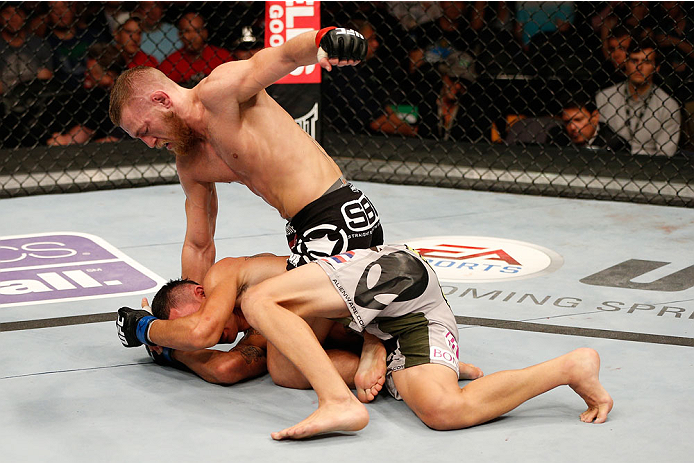 Some people falter under pressure, while others revel in it, and McGregor proved to be part of the latter group when matched up with Brazil’s Diego Brandao in July of 2014. Not only was McGregor returning after nearly a year away from the Octagon due to injury, but he was coming back as the headliner of the UFC’s return to his home city of Dublin. Yet despite the deluge of media descending on him and the weight of expectations dropped on his shoulders, McGregor responded with a Performance of the Night stoppage, barely getting touched by Brandao before the end came at the 4:05 mark. (Watch on UFC FIGHT PASS)

Having proved able to defeat his fellow prospects, McGregor still had to show that he could hang with the contenders of the featherweight division, and against Dustin Poirier in Las Vegas, he did more than that, stopping the talented and experienced veteran in less than two minutes. If fans thought they heard enough of McGregor’s talk, he was about to do even more. Yet what they couldn’t deny was that when he talked, he lived up to every boast. And now he had the attention of champion Jose Aldo. (Watch on UFC FIGHT PASS) 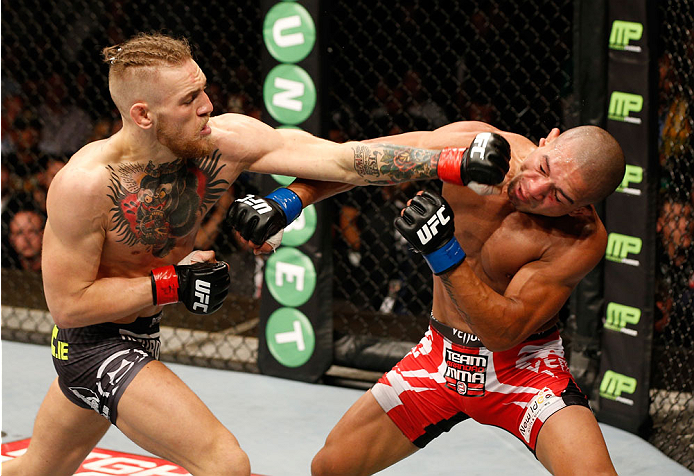 Many believed that McGregor’s win over Poirier was enough to put him in a title fight with Aldo, but the UFC wanted to see him pass one more test. In his second headlining bout, this time against Germany’s Dennis Siver in Boston, McGregor cemented his place as the next in line for a crack at the crown with a dominant second-round finish of Siver. But was he ready for Aldo? (Watch on UFC FIGHT PASS)

After an extensive media tour to build up his UFC 189 bout against Aldo, McGregor got a shot to the chest when the champion was forced to withdraw from the fight due to injury. Still wanting to stay on the card, McGregor took on a dangerous replacement foe in the form of Chad Mendes, and despite some rough early moments when he was taken down by the Team Alpha Male standout, McGregor roared back, scored a second-round TKO victory and picked up the interim 145-pound title belt. Aldo would have to wait, but not for long. (Watch on UFC FIGHT PASS)

If Conor McGregor never won another fight again, he would still be remembered forever for this one. After all the hype and anticipation for Aldo vs. McGregor, the Irishman took just 13 seconds to take Aldo’s belt and end the Brazilian’s decade-long unbeaten streak. Watching it on television just doesn’t do it justice, as saying the MGM Grand Garden Arena erupted that night is an understatement. Conor McGregor owned Las Vegas that night, and now he had his sights on the world. (Watch on UFC FIGHT PASS) 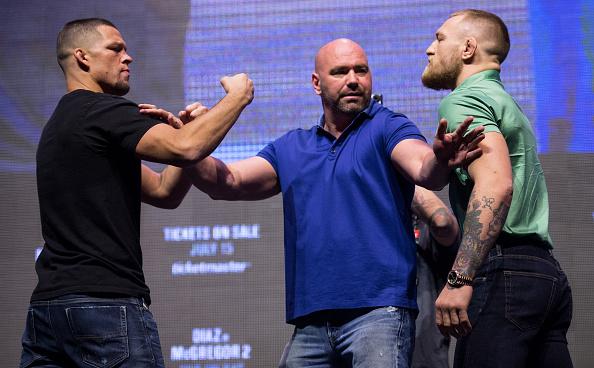 There would be no rest or any lack of ambition from Mr. McGregor after he won his world title, as he immediately set his sights on a March 2016 bout with lightweight champion Rafael Dos Anjos. But McGregor’s quest for history was delayed when Dos Anjos got injured. What to do? How about a short notice bout with Nate Diaz…at 170 pounds? McGregor was in, Diaz was in, and after a strong start from the Irishman, Diaz took over in the second round and submitted “The Notorious” one. The fight sent shockwaves through the sports world and begged for a rematch. (Watch on UFC FIGHT PASS)

After suffering his first UFC loss, McGregor could have gone back to featherweight to defend his title or even request a rematch with Diaz at a more feasible 155 pounds. He didn’t. He wanted the rematch ASAP at 170 again. And this time, in one of the biggest events of the year at UFC 202, McGregor evened the score, holding off a late charge from Diaz to win a five-round majority decision. It was stirring stuff from a man getting used to delivering that kind of excitement. (Watch on UFC FIGHT PASS)

Again put on the doorstep of history, McGregor kicked that door down at UFC 205, as he defeated Eddie Alvarez in the main event of the first MMA card at Madison Square Garden. The bout was vintage McGregor, as he gauged the distance, got his range and then unleashed pinpoint accurate combinations that halted the Philadelphia veteran in the second round. With that victory, McGregor took Alvarez’ lightweight title, making him the first fighter in UFC history to hold two belts simultaneously. Just another day at the office for McGregor, who lost a boxing match to future Hall of Famer Floyd Mayweather in 2017 before a 2018 defeat to Khabib Nurmagomedov in the Octagon. On January 18, he’s back. (Watch on UFC FIGHT PASS)