2021 Kept Us On Our Feet Thanks To The Athletes Who Brought Their All Into The Octagon. Here Are Our Top-10 Fighters For The Year
By Thomas Gerbasi, on Twitter @TGerbasi • Dec. 23, 2021

Who were the best fighters of 2021? Read on for our picks as the highly unofficial awards season continues.

As soon as she got finished submitting Sara McMann in January, Julianna Peña went “Lioness” hunting, and even though she was counted out by many in the fight game, when she got her shot at Amanda Nunes earlier this month.

She lived up to everything she said she was going to do, and at 3:26 of the second round, “The Venezuelan Vixen” was a world champion, as she shockingly put an end to Nunes’ reign atop the bantamweight division via submission. Let the Peña era begin. 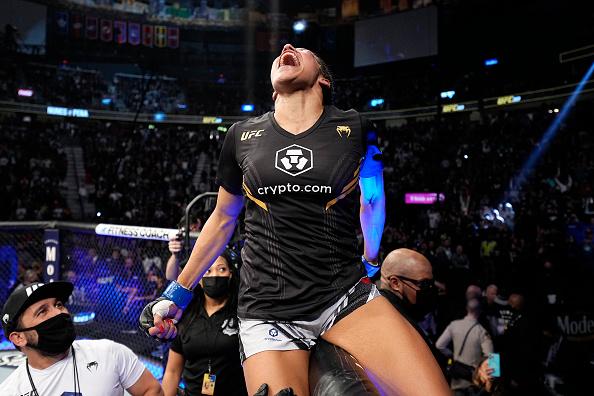 Marina Rodriguez doesn’t make a lot of noise, but when it’s time to fight, she’s always ready to go. In 2021, the strawweight contender from Brazil made the walk three times, and each time, she left with a victory, defeating Amanda Ribas, Michelle Waterson and Mackenzie Dern.

That’s a formidable trio for sure, and it’s why she’s ending 2021 in the number three spot in the rankings at 115 pounds.

In a year filled with plenty of feel-good stories, the winner of that award for 2021 has to be Glover Teixeira. In his lone fight of the year, the Brazilian veteran fought for the light heavyweight title more than seven years after his first shot against Jon Jones.

The second go-round was the one for the 42-year-old, who became the king of the 205-pounders thanks to a second-round submission of Jan Blachowicz.

Brandon Moreno fought the fight of his life in December 2020, going five hard rounds with UFC flyweight boss Deiveson Figueiredo in a bout ruled a draw, and some wondered if he could reach those heights again in their June rematch.

He did, and not just that, but “The Assassin Baby” soared even higher in submitting Figueiredo in the third round to win the 125-pound crown and become the first native of Mexico to become a UFC champion. 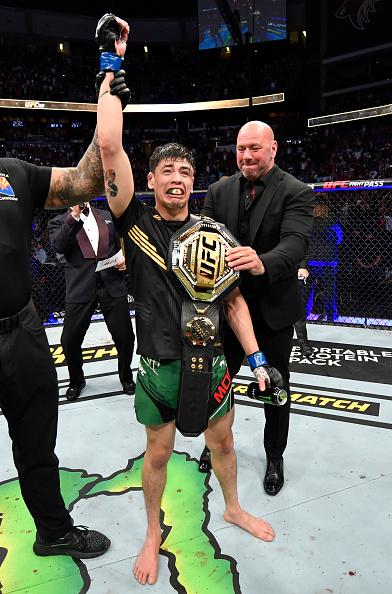 Brandon Moreno of Mexico reacts after submitting Deiveson Figueiredo of Brazil to win the UFC flyweight championship fight during the UFC 263 event at Gila River Arena on June 12, 2021 in Glendale, Arizona. (Photo by Jeff Bottari/Zuffa LLC)

Max Holloway just turned 30 earlier this month, a heck of a young age to already be one of the most accomplished 145ers in MMA history, but some still doubt the former featherweight champion.

It happened after his 2013 loss to Conor McGregor, before the Brian Ortega fight in 2018 and it was happening again after a pair of decision losses to Alexander Volkanovski. But Holloway’s response was the same as always – he silenced the doubters, and in January, he delivered perhaps the most impressive performance of his career in defeating Calvin Kattar on UFC Fight Island and followed it up with an equally notable victory over Yair Rodriguez in November.

The lesson here? Don’t doubt “Blessed,” it only fires him up. 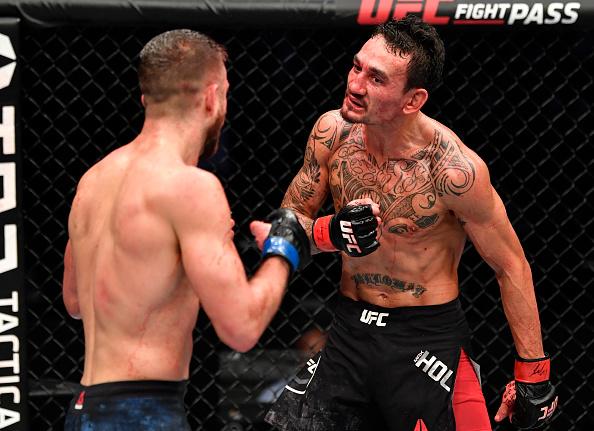 Finally. That has to be the word fans of Islam Makhachev are saying to describe the lightweight contender’s 2021 campaign, because after fighting just eight times in his first four years on the roster, Makhachev fought and won three times in 2021, submitting Drew Dober, Thiago Moises and Dan Hooker.

Relive The Rise Of Islam Makhachev

Now it’s safe to say that he’s arrived, and will likely be looking at a title shot in 2022 if he keeps on this track.

THUG ROSE! THUG ROSE! No, there were no excited chants from Daniel Cormier for Rose Namajunas in 2021, but she earned all the praise she got after a pair of victories over Zhang Weili that allowed her to regain the strawweight title in April and successfully defend it in November.

And with each of those fights being vastly different from the other, it showed off Namajunas’ full range of skills, proving that at 115 pounds, she is the undisputed queen of the division. 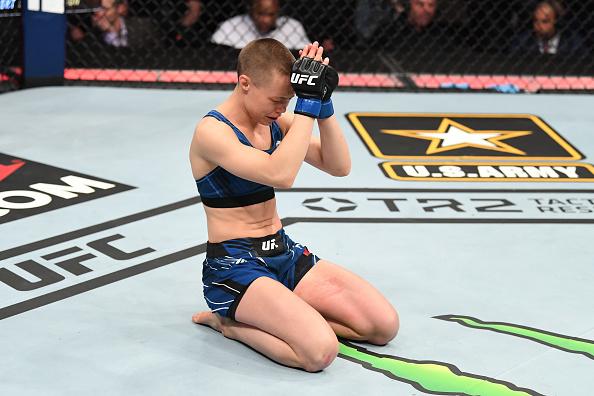 Ciryl Gane arrived in the UFC in 2019 and was advertised as a striking specialist, but with each passing fight, we found out that the Frenchman was good at everything. Add in athleticism and a high fight IQ, and it shouldn’t be any surprise that he ended 2021 with three wins over Jairzinho Rozenstruik, Alexander Volkov and Derrick Lewis, as well as the interim UFC heavyweight title.

Ciryl Gane Plows Through Some Of The Division's Best

On January 22, he gets his shot to get the undisputed title when he faces former teammate Francis Ngannou, and if his chin holds up against “The Predator,” we might be witnessing the start of a new era in the division.

There were times when Charles Oliveira was missing weight consistently and / or losing pivotal fights that it seemed like he would never fulfill his potential as a mixed martial artist.

Well, in five minutes and 19 seconds in Houston in May, “Do Bronx” hit all his marks in roaring back from a rough first round to stop Michael Chandler and in the process, he delivered an inspiring statement to all his peers by putting past setbacks behind him and becoming the UFC lightweight champion of the world.

Now that’s a story, one that added a compelling chapter on December 11 when he successfully defended his crown for the first time with a submission of Dustin Poirier. 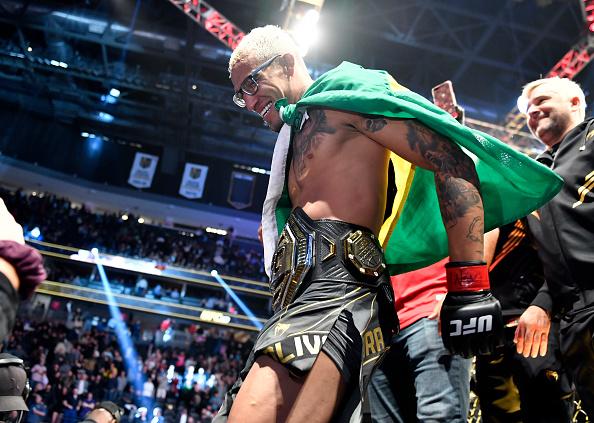 Charles Oliveira of Brazil reacts after being announced the winner by submission against Dustin Poirier after their UFC lightweight championship bout during the UFC 269 on December 11, 2021 in Las Vegas, Nevada. (Photo by Chris Unger/Zuffa LLC)

When you consider that Kamaru Usman has gone from being a dominant world champion to being in the all-time great welterweight conversation in 2021, that means “The Nigerian Nightmare” had a pretty good year in the Octagon.

First, he scored a February finish of Gilbert Burns in a fight where he had to overcome some brief adversity to win, and then came his blistering second-round knockout of Jorge Masvidal in their April rematch.

That might have been enough to earn him this spot, but then he went and defeated Colby Covington a second time in November to seal the deal. This shouldn’t be a surprise, though, because Usman warned us years ago that he was a problem for anyone at 170 pounds. He wasn’t lying.