The owner of the most wins, finishes and post-fight bonuses in UFC history, Donald Cerrone is one of those fighters who makes it tough to find just ten highlights from his thrill-a-minute career. But after whittling this list down to his UFC career alone and chopping down even further, we think we’ve found the perfect ten fights to check out if you want to get up to speed on “Cowboy” before his UFC 246 main event against Conor McGregor on January 18.

Cerrone more than made his bones during his 10-fight run in the WEC, fighting the likes of Benson Henderson (twice), Jamie Varner (twice), James Krause, and Danny Castillo, but many wondered whether he could repeat that success in the UFC. Well, England’s Paul Kelly tried to test him, taking the fight to the Coloradan from the opening bell, but by the second round, Cerrone took over, getting into the mount and then finishing Kelly with a rear naked choke when the Brit gave up his back.

Known for his back-and-forth wars, Cerrone showed how dominating he could be against a top-level foe in his third Octagon bout, as he simply tore through Brazilian phenom Charles Oliveira. A body shot followed by a knee spelled the beginning of the end for “Do Bronx,” with Cerrone ending matters with ground strikes at 3:01 of the first round.

Former training partners Cerrone and Melvin Guillard fought like bitter enemies in one of the most explosive 76-second fights you will ever witness. Guillard struck first, wobbling the steel-chinned Cerrone early on, but the “Cowboy” fired back with his own bombs, and after a head kick and some punches, it was lights out for “The Young Assassin.”

Also check out the top 10 moments of Conor McGregor's career 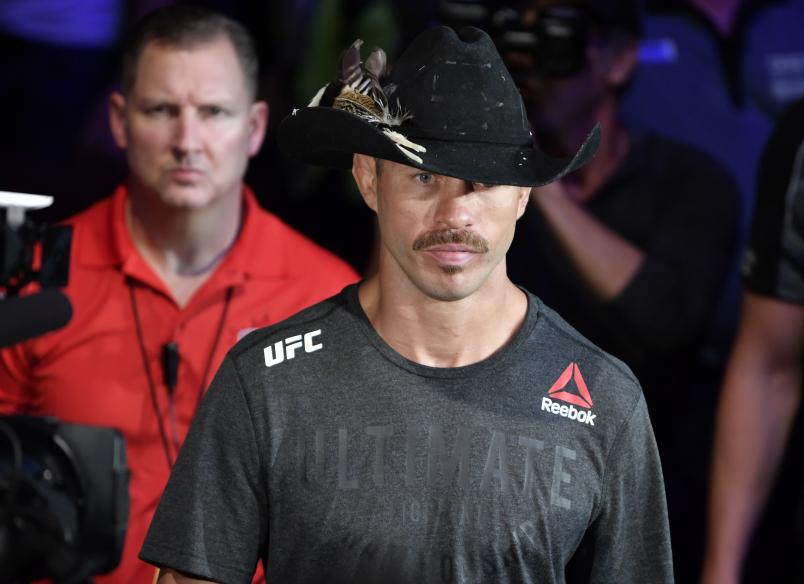 By the time Cerrone’s UFC 167 bout with Evan Dunham rolled around, the former WEC standout was 1-2 in his previous three bouts, losing to Anthony Pettis and Rafael Dos Anjos and scoring a clear-cut but less than thrilling decision win over KJ Noons. But on this night in November 2013, the old “Cowboy” was back, putting together one of his most complete and dominant efforts en route to a second-round submission victory via triangle choke.

Expected to be a war for the ages between two lanky and devastating strikers, the Cerrone vs. Edson Barboza bout started out in the Brazilian’s favor, as he tagged his foe with several flush shots. But when Cerrone came back and dropped Barboza with a jab, it was just a matter of seconds before he locked in a rear naked choke and finished matters at 3:15 of the opening stanza.

No one knocks out Jersey-tough Jim Miller. In fact, no one achieved that feat before Cerrone did in 2014, as he broke open a close fight in the second round with a thudding kick to the head that sent Miller crashing to the deck. The win was Cerrone’s fourth in a row, but he still had four more to go before he got his crack at the lightweight crown. 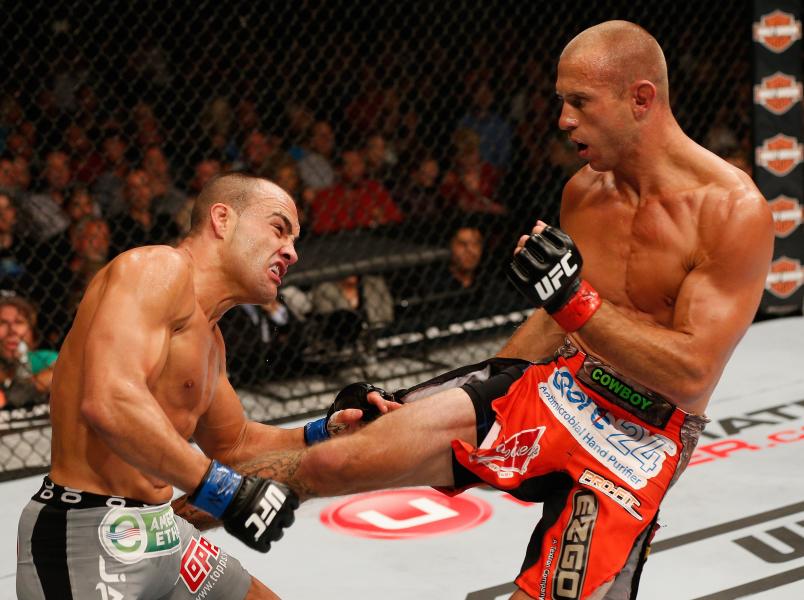 Eddie Alvarez’ UFC debut in 2014 was one of the most highly anticipated in years, and knowing that he was going to throw hands with Cerrone made the hype meter go off the charts. And while the two didn’t pick up Fight of the Night honors that night in Vegas, there were enough heated exchanges that both men left the Octagon knowing that they had been in a battle, one which Cerrone took by unanimous decision.

Scheduled to face Khabib Nurmagomedov in a title elimination bout, Cerrone instead got a late replacement foe in John Makdessi after Nurmagomedov suffered a knee injury. On paper, it was high risk low reward for Cerrone, but in reality, he was now getting an opponent who was going to stand with him, and he relished that opportunity, eventually ending the bout in the second round with a kick that broke Makdessi’s jaw.

Right up there with Nate Marquardt’s video game finish of Wilson Gouveia was Cerrone’s stoppage of ultra-tough Rick Story in 2016. Started by a left to the head and a right to the body, Cerrone then landed another left punch to the head followed by a right kick to the head that spun Story around. The barrage of shots that followed ended the bout officially, but this one was over as soon as Cerrone scored with his four-shot Tekken combo. 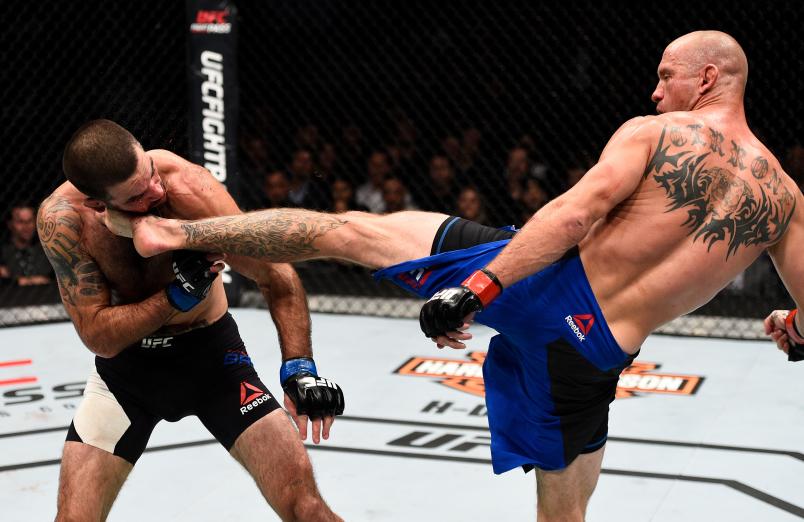 Donald Cerrone knocks out Matt Brown with a kick to the head in their welterweight bout during the UFC 206 event inside the Air Canada Centre on December 10, 2016 in Toronto, Ontario, Canada. (Photo by Jeff Bottari/Zuffa LLC via Getty Images)

One of the most underrated fights of 2016, Cerrone and Matt Brown took turns throwing bombs at each other throughout a punishing welterweight clash, but in the third round, “Cowboy” ended matters with a flush kick to the head that put the durable Brown on the deck for good.