"I’m in the big show and there’s nothing stopping me now. I feel like I’m
finally reaping the benefits of all the hard work I’ve been putting in." - Danny Castillo 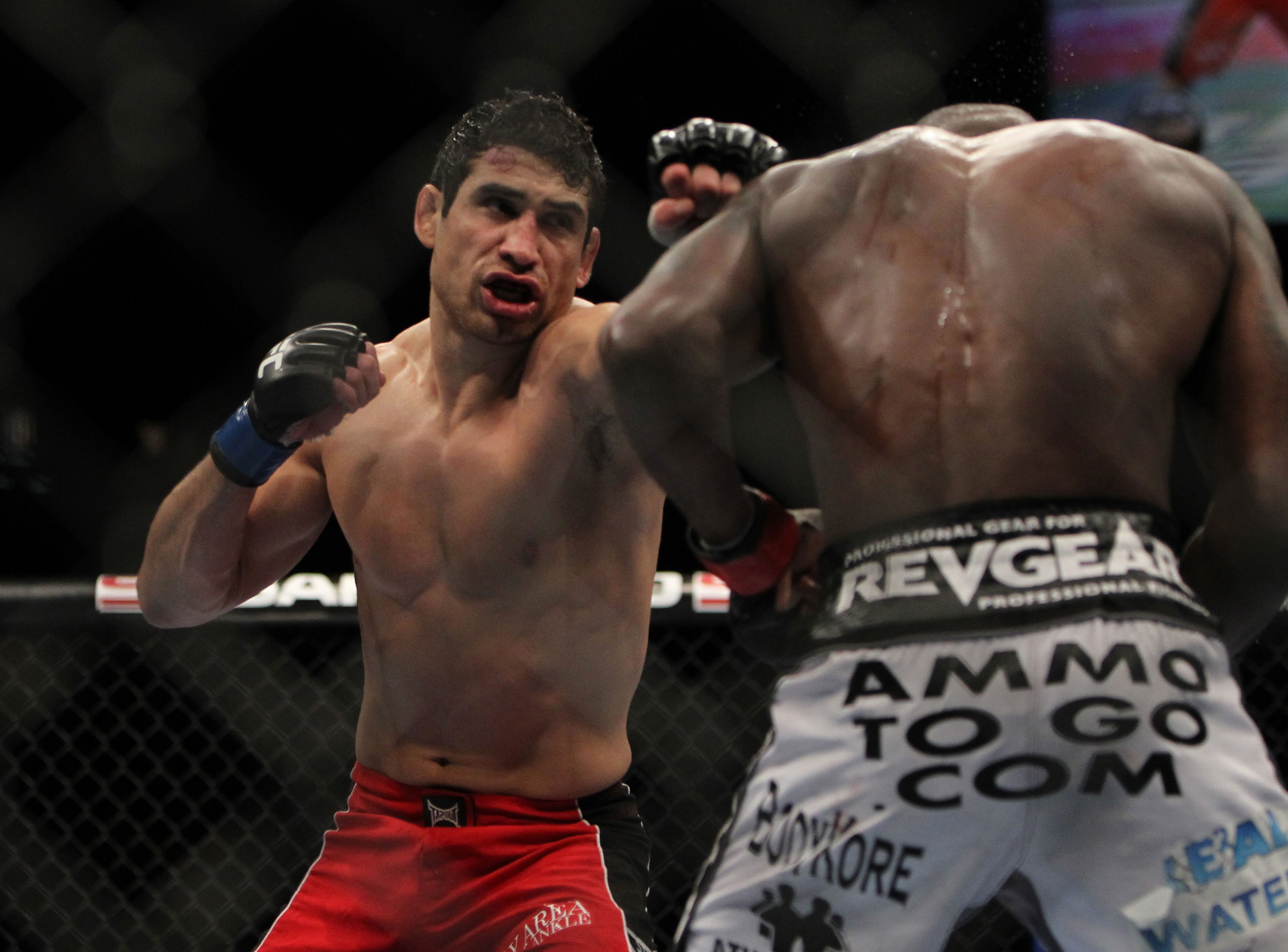 Think of it as one of the perks of being a UFC fighter. No, not VIP passes to the hottest clubs, autograph seekers around every turn, or television features singing your praises. For lightweight Danny Castillo, his perk was the opportunity to supplement the daily routine of his recent training camp in Las Vegas with a trip to the Mayweather Boxing Club to work with Jeff Mayweather, brother of the perhaps better-known Roger and Floyd Sr., but no second fiddle to his siblings when it comes to teaching the intricacies of the sweet science.

“I try not to harp on the whole thing and not get caught up,” said Castillo, a longtime boxing fan who counts the late Diego Corrales as one of his fistic heroes. “I want to focus on the technique and get in as much work as possible, but sometimes I do sit back and I see Roger there and I realize I’m working with one of the best families in boxing, the Mayweathers. Sometimes I go home and it could be a little thing like Jeff telling me my defense looked good that day, and it’s just an amazing feeling to hear that. It’s just great to be around there and it makes training enjoyable and it’s really motivating for me. I’m eager to learn and I felt like I learned so much from him in the short time that I worked with him.”

It’s almost like the professional version of a fantasy camp, but instead of 40 and 50 year olds hitting batting practice with the idols of their youth, Castillo is getting practical knowledge that will serve him well in his day job, beginning with Saturday’s bout against up and comer John Cholish on the UFC on FOX 3 card in New Jersey.

“I think I sharpened up my boxing, and my jiu-jitsu as well, so when I get in that fight, I’m sure John Cholish is gonna try to take me down, so I’m excited to see where I improved the most,” he said. “That’s the cool thing about this fight and what’s got me so pumped. I’ve been prepared for the last two, three weeks. In the past I’ve gone into fights saying ‘did I work enough on my boxing, did I work enough on my Muay Thai?’ But right now, I just want to hurry up and get it over with.”

And even though he’s walked up the four steps into sanctioned combat 17 times and built a reputation as one of the rising stars of the 155-pound weight class, the 32-year old isn’t someone who thinks he’s got it all figured out. He’s hungry, both in the gym and the Octagon, to get better and better, an attitude he shares with his Team Alpha Male training partners, most of whom traveled with Urijah Faber to Vegas as “The California Kid” coaches the 15th season of The Ultimate Fighter.

“We’re so like-minded, all of us together, and you could pretty much put us in the middle of the forest, and we could run a camp out there and enjoy ourselves,” said Castillo, probably the only person in the world who can tell you he left his native Sacramento to go to Vegas and get away from it all. “I really enjoy the company of the guys that I train with, and the knowledge that’s in the room from everybody, it’s weird because we don’t necessarily have one single coach. It’s more like a co-op and everyone’s so eager to learn.  So I wasn’t worried about it (leaving Sacramento for this camp) at all. The only thing I was worried about was my strength and conditioning coach not being there, but he did an awesome job of emailing me my workouts every day and checking in on me, and at the TUF gym I was able to get those workouts in. It was great for me.”

Add in work with renowned jiu-jitsu coach Sergio Penha (“that guy’s awesome, he’s phenomenal,” said Castillo), and “Last Call” may very well have had his best camp to date, and it’s the perfect time for it, as he’s won five of his last six bouts, with the only defeat coming via decision to Jacob Volkmann in August of last year. Since then, he stopped Shamar Bailey in the first round and won a close split decision over Anthony Njokuani.

The three rounder with Njokuani wasn’t Castillo’s best performance, but he did do enough to win, a final outcome that drew boos from the Las Vegas crowd. Castillo admits that the response bothered him briefly, but with the help of teammate and UFC vet Justin Buchholz, along with the rest of the Alpha Male squad, he brushed off the criticism and moved forward.

“After the fight I was a little bit disappointed in my performance, but that’s because I’m my biggest critic, and I expect that from myself after every fight,” he said. “But to boo me after I put it all in the cage…Njokuani is a talented fighter and he’s getting better all the time, and for me to beat somebody of his caliber, it’s a notch on my belt, and it’s a confidence booster and a stepping stone for me. And to hear people booing me, I just fought my heart out for 15 minutes and you guys want to boo me? It was kinda hurtful, but it bothered me for about five minutes. I have great guys around me, and Justin Buchholz was like ‘dude, what the hell are you sad about? You just got two paychecks, there’s nothing hurt on you, you just fought one of the best strikers in the lightweight division, and you won.’”

Buchholz couldn’t have put it any better, and if Castillo didn’t know that you can’t please everyone all the time in this game, he knows it now. So what’s the solution? Keep getting better and keep winning, and everything else will work itself out. That’s the goal, and Castillo hopes to leave Jersey this weekend not just with a win, but with some new fans as well.

“I hope they (the fans) see my improvements,” he said. “I believe I’ve made some huge leaps and bounds in my career, I’m coming up on my fifth year of fighting, and it seems just like yesterday that I was fighting in the Gladiator Challenge and then the WEC. But now I’m in the big show and there’s nothing stopping me now. I feel like I’m finally reaping the benefits of all the hard work I’ve been putting in. I think you’re gonna see a different, more motivated fighter come May 5th, I’m really excited, and I hope to gain a bunch of new fans.”