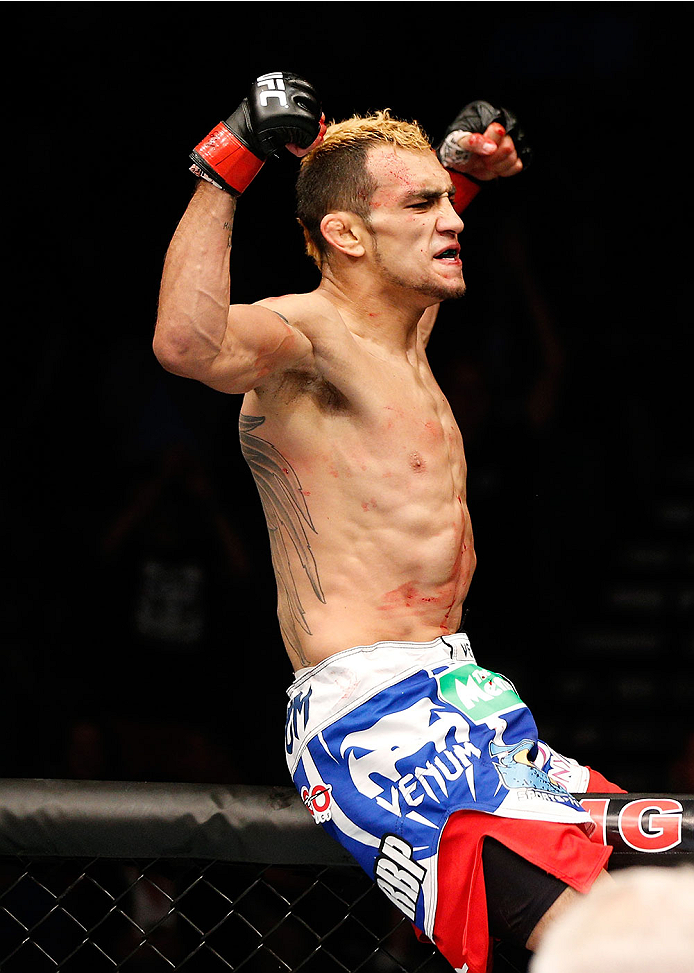 The words from Tony Ferguson regarding his elevation to the UFC 177 co-main event slot for his Saturday bout against Danny Castillo spoke volumes. And they were spot on.

When he steps into the Octagon to face “Last Call” in Sacramento, it’s Ferguson’s opportunity to shine on the sport’s biggest stage and mark himself as a lightweight to keep a close eye on in the coming years. Frankly, Ferguson should have been in that position already as a former Ultimate Fighter winner who has an engaging personality, wins in five of his six UFC bouts, and four of those victories coming by KO or submission. But he’s not bitter about the wait or about taking the long road to the Sleep Train Arena.

“I’m glad it’s been step-by-step,” he said. “When you rush to the top, sometimes you’re not there for a very long time. And I know my skill set when I was in The Ultimate Fighter house needed to be upgraded. So I’m a very patient person. I like to go to the drawing board and I look at it instead of giving excuses. So when I wasn’t getting those top spots, it was me. I was thinking it’s my fault. It’s not the UFC. So I needed to go back to the drawing board and figure out what I needed to do.”

Other than injuries, the only misstep for Ferguson was a 2012 decision loss to Michael Johnson in which he broke his forearm blocking a kick from “The Menace.” But his wins over Ramsey Nijem, Yves Edwards, Aaron Riley, Mike Rio, and Katsunori Kikuno haven’t gotten the buzz started about “El Cucuy” until now, and in the meantime, he didn’t say a word about it, something he learned from his father.

“I’m a hunter,” Ferguson said. “When my pops used to teach me how to hunt, he was like ‘you’re not going to be able to see anything unless you’re quiet.’ So I’m very patient and I’ve had those moments when I’ve had to wait. I remember having wrestling shoes my junior year that were falling off my feet, and my parents didn’t have a lot of cash, so they were like ‘if you wait until your senior year to buy a new pair, we’ll buy you the top of the line, whatever you want.’ And I made it work. My whole life has been making things work and being patient, and then when it does happen, boom, I just give it my all.”

Since his return from the broken arm, Ferguson has looked sharper than ever, submitting Rio and knocking Kikuno out, both fights ending in the first round. In Castillo, he’ll be facing a seasoned vet who has seen it all in the UFC and WEC, and who will have the added incentive of fighting in front of his hometown fans this weekend. Ferguson doesn’t dismiss his foe or the magnitude of Saturday’s fight, but he does dismiss the idea of any of that getting to him. And again, he goes back to words of wisdom from his dad to keep him focused and grounded.

“I see him (Castillo) as just another fighter,” Ferguson said. “My dad taught me when I was little to not go up to the wrestling chart and not look to see who the next person is, or where they’re from or what their credentials are, or anything. So he’s another man who’s going to be inside that Octagon with “El Cucuy.” And I tell you what, if he’s ever seen me fight, he knows that he’s going to have his hands full. But I know one thing for sure – we’re both going to go in there guns a blazin’ and one of us is going to come out victorious, and that’s going to be me. I’m going to finish Danny Castillo, just like I do any of my other opponents.”

The outcome of Saturday’s bout could be a star-making turn for the winner, and if you’ve heard either fighter in the lead-up to UFC 177, it’s clear that they’ve taken a life’s worth of experience and thrown it into the blender in an effort to produce the best version of themselves when it matters on fight night. For the 30-year-old Ferguson, that means reflecting on his days on the wrestling mat, as well as his time on the gridiron, something aided by his work with performance coach John Walker, a former USC and NFL cornerback.

“I told John that Danny Castillo’s like a fullback and he’s running an iso through the line,” Ferguson said. “And I’m the outside cornerback and I have to meet him in the middle, make sure he gets no yards, and smash him, put him on his back. From there, everything changed. I became this different animal. Mentally, physically, emotionally, I’m there, and I feel like there’s only one way I can go, and it’s just to keep building up.”

The perfect storm is a rarity in sports, but when it happens, it’s something to see. Tony Ferguson believes he’s on his way to one; all it takes is putting everything together on Saturday night.

“This is why I’m here and this is where I should be,” he said. “I know my skill level and how hard I work. I know the mistakes I made in the past, I’ve dealt with them and I’m done with them and I’ve matured since then, so this is exactly what I need to do for me and my family, and this is the first step.”