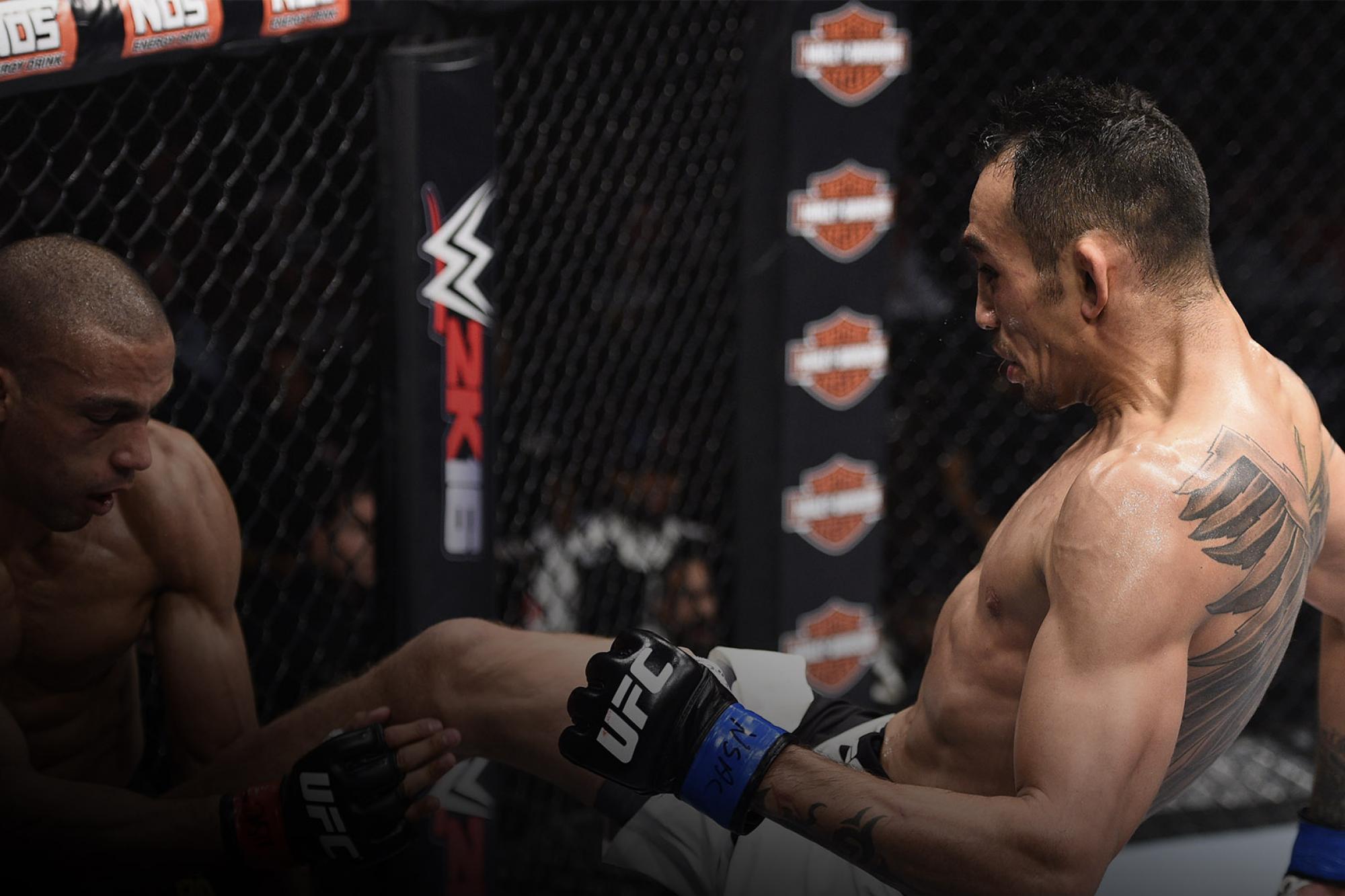 Look back at six of Tony Ferguson's best moments in the Octagon
By Thomas Gerbasi, on Twitter: @TGerbasi • Apr. 10, 2020

What are six of the most memorable performances turned in by lightweight standout Tony Ferguson? Read on to find out...

2011
Ramsey Nijem (Watch on UFC FIGHT PASS)
After a tumultuous run through season 13 of The Ultimate Fighter, Ferguson had his opportunity to close out the show in the final against Ramsey Nijem and in less than four minutes, he did just that with a ferocious knockout that kicked off his UFC career in emphatic fashion.

2014
Katsunori Kikuno (Watch on UFC FIGHT PASS)
Despite his impressive entrance into the UFC, Ferguson still flew under the radar early in his Octagon career, and while he won three bouts over Aaron Riley, Yves Edwards and Mike Rio, a decision loss to Michael Johnson in 2012 dented his marketability a bit. Yet two years after that defeat, Ferguson finally began to make up ground in a crowded division, with a single right hand ending Katsunori Kikuno’s night in the first round of their UFC 173 bout.

2015
Josh Thomson (Watch on UFC FIGHT PASS)
By the time Ferguson’s matchup with former Strikeforce champion Josh Thomson rolled around in July 2015, “El Cucuy” was 8-1 in the UFC with six finishes and three post-fight bonuses. He should have been a shoo-in for a title shot, but it just didn’t come. Ferguson stayed focused, expecting that winning would solve all problems. He was half-right. How he won was going to determine his future, and while he didn’t stop Thomson, he put on such an offensive clinic that he earned Performance of the Night honors for his decision victory. This was the fight that truly started it all for him.

Edson Barboza (Watch on UFC FIGHT PASS)
If the Thomson fight announced Ferguson’s arrival, his place at the top of the 155-pound weight class was cemented with this submission victory over Edson Barboza. Earning him Fight and Performance of the Night honors, Ferguson continued to be a must see on fight night, not just for his skill set, but his reckless disregard for his safety. Ferguson was treating these bouts as fights, and his willingness to put himself in harm’s way to get the win built his bandwagon considerably.

2016
Lando Vannata (Watch on UFC FIGHT PASS)
To follow up on the Barboza fight, it’s important to point out that while recklessness makes for great fights, it can cost you sometimes, and that’s what happened when Ferguson met late-notice replacement Lando Vannata. With nothing to lose, Vannata came out swinging, and with everything to lose, Ferguson did the same. Vannata nearly won that standoff as he rocked and nearly finished “El Cucuy” in the opening frame. But with the heart of a champion, Ferguson roared back in the second round and submitted the newcomer. Put another Fight of the Night bonus check into that man’s wallet.

Rafael Dos Anjos (Watch on UFC FIGHT PASS)
Ferguson had fought plenty of killers on his way up the lightweight ladder, but to beat a former champion in Rafael Dos Anjos would be another story. Or would it? Not in Ferguson’s world. In that world, Ferguson treats all opponents the same, and with his same aggressive, offensively diverse style, he added Dos Anjos to his victims’ list, outpointing the Brazilian veteran over five rounds while earning another Fight of the Night bonus. After the win over RDA, “El Cucuy” finished three more lightweight stars, submitting Kevin Lee and halting Anthony Pettis and Donald Cerrone.