"When I go inside that cage, I want those dudes afraid of just stepping
in front of me. Even when they sign that bout contract, I want them to
have fear all the way through camp." - Tony Ferguson 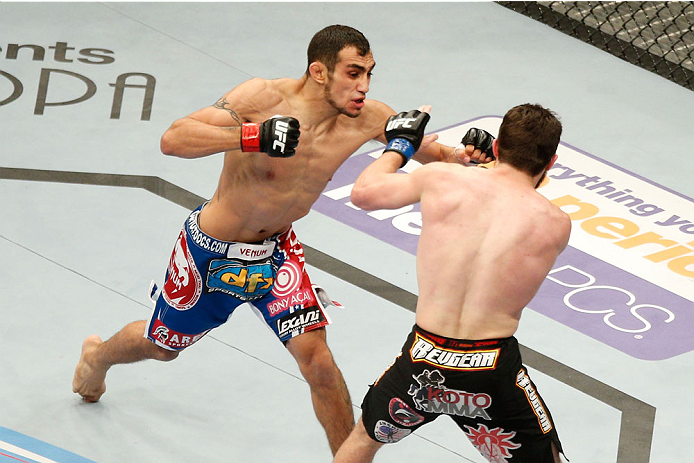 Tony Ferguson cares. It may be an odd statement to make about a prizefighter, because why else would you do this if it wasn’t something ingrained in you, but everyone knows that there are those folks who care a little bit more, and not just about the paycheck, but about how they’re remembered a hundred years from now.

Ferguson is one of those people.

“I want to be one of the greats,” said the lightweight prospect, who will step into the Octagon this Saturday to face Japan’s Katsunori Kikuno at UFC 173 in Las Vegas. “I was to become a master of my art, not just a dabbler or an achiever – a master.”

Bold words, but the Californian has never been afraid of those, and for the most part, he’s always delivered. 15-3 as a pro, Ferguson won season 13 of The Ultimate Fighter and picked up two more UFC victories over Aaron Riley and Yves Edwards, seemingly on the fast track to the 155-pound title picture.

Then came a decision loss to Michael Johnson in May of 2012 that saw him break his arm while blocking a kick in the first round, and all the momentum Ferguson built up disappeared in the space of 15 minutes.

After getting a metal plate inserted in his arm (one that has since been removed), Ferguson and his wife packed their bags and moved from Ventura to Orange County, with “El Cucuy” changing camps in the process, going from the Knuckleheadz team to a collective that includes the Reign Training Center, 10th Planet Jiu-Jitsu, American Gym Boxing, and the Costa Mesa Training Center. That took care of the physical end of things for Ferguson. The rest was up to him.

“I don’t know what happened to me,” he admits. “I got emasculated somewhere along the lines between The Ultimate Fighter and last year, and I don’t know what the hell happened. But what I did is trash it all, I came up with a whole new game plan, and I made sure that whenever I show up for practice, I’m kicking ass. Maybe I got burned out before. I’ve been competing in sports for over 20-something years. When you play sports for a long time, sometimes you need a little break. For me to overcome that and get to where I’m at right now, that’s awesome.”

Where Ferguson is right now is on the verge of being where he was at before the Johnson fight. His return to active duty last October was a spectacular one, as he picked up a Submission of the Night award for his finish of Mike Rio, a result he planned for and got at a most welcome time.

“I told everybody how I was gonna finish Mike Rio three months before I finished him,” he laughs, admitting that after not fighting for over a year, a win bonus and a post-fight award check both came in handy. “And I practiced it and practiced it and I knew he was going to shoot on me. And I looked at the card and I saw that all these dudes were knockout artists, and I said my best chance at a bonus is to get Submission of the Night. And guess what happened? It was the only submission that night.”

He’s aiming for a similarly positive result this weekend, but at this point, it seems like everything is right where he wants it to be regardless of what happens on fight night.

“I gained that passion for my art again, for my sport,” said the 30-year-old Ferguson. “I want to be original and not just be somebody that goes out there and does what everybody else does. That’s not my game. When you get to the pros, sometimes you get lazy. So I had to remind myself to go back to where I was in college and work twice as hard like I used to. Now when I go inside that cage, I want those dudes afraid of just stepping in front of me. Even when they sign that bout contract, I want them to have fear all the way through camp.”

Well, “El Cucuy” is Spanish for the “The Boogeyman,” and no one wants to deal with him.