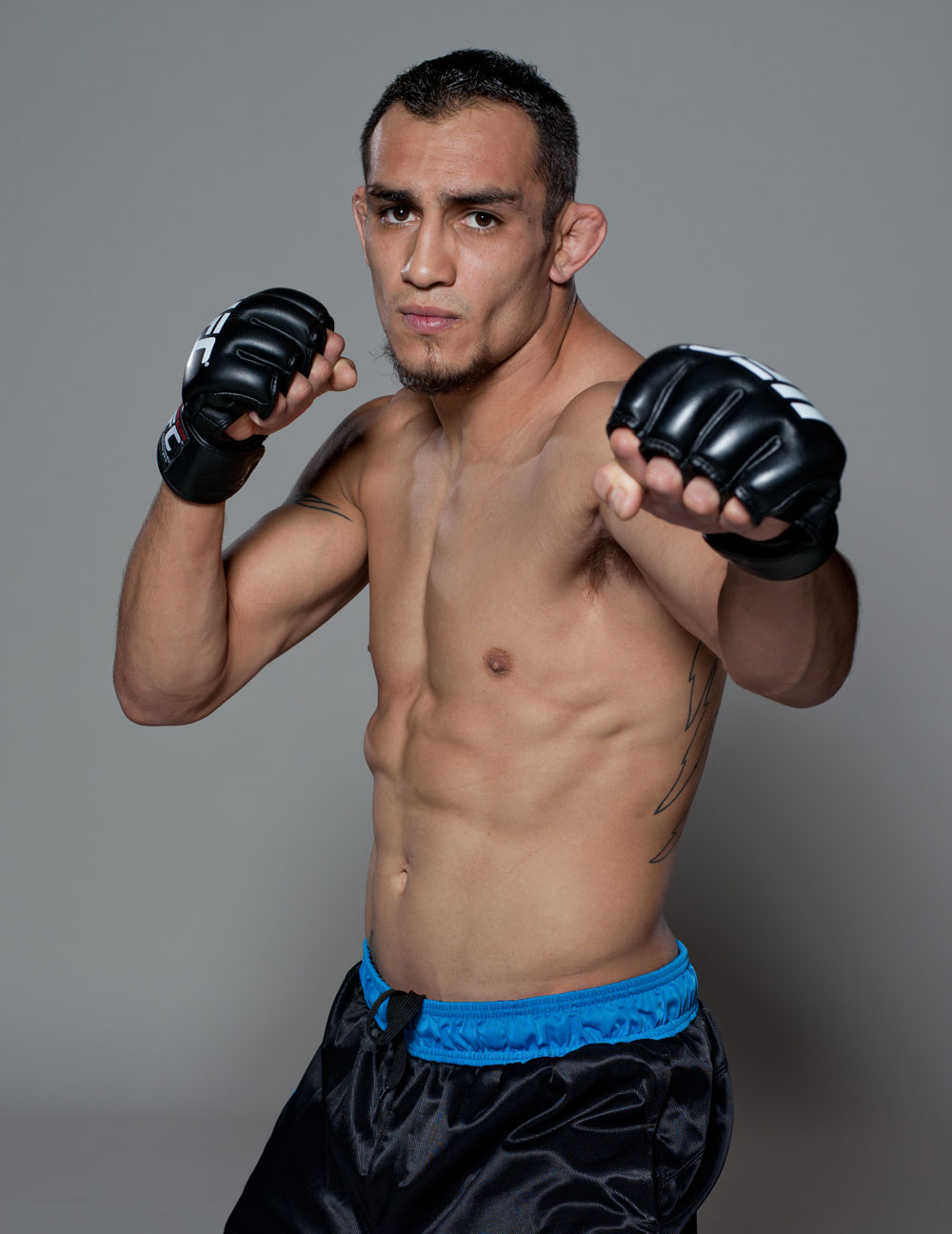 Tony Ferguson had three hours to kill. He and his castmates on season 13 of The Ultimate Fighter had just finished taping on the Spike TV reality series, and before they met up with UFC President Dana White for dinner, he had a quick errand to run, one that couldn’t wait until he got back home to California.

“I went to Jared (Jewelers) and I got a ring,” said Ferguson. It wasn’t for him, a diamond encrusted skull or something like that. It was an engagement ring for his girlfriend, Cristina, and if six weeks away didn’t show him how much he loved her, nothing would.

“She wasn’t expecting it, but it made me realize how much I want her to be in my life,” he said. “I proposed to her as soon as I got home after the show. It took that much to realize exactly what was important to me, what I loved, and what I missed.”

Who would expect that the end of The Ultimate Fighter’s latest season would result in romance?

“I’m a hopeless romantic,” laughs Ferguson, who met Cristina after a particularly rough night in his job as a mixed martial artist.

“I met her after my first loss to Karen Darabedyan,” he recalled. “He (Darabedyan) got me in a heel hook and he popped my tendons but I didn’t give up. So I met her afterward and we danced, and it was funny because I totally forgot about my leg being broke. (Laughs) I don’t know, she turned my world upside down, it’s kinda crazy.”

Life is going to get even crazier for Ferguson tomorrow night, when he walks into The Palms in Las Vegas. It’s not for a weekend with his lady or a bachelor party with his buddies. Ferguson is showing up in Sin City to fight for his future, as a UFC contract is on the line when he meets Ramsey Nijem in the TUF13 final.

“Ramsey comes from the same kind of background that I do,” he said. “He’s a wrestler, he works hard, and he doesn’t take no for an answer. He’s a goofball, and I’m pretty reserved and kinda grew out of that, but we’re more or less the same person and we both want that elite level. That’s why I think we’re the best two and the guys that should be there. We want the world to see exactly what we’re about. We’re martial artists, we want to paint that picture inside the cage and let everybody see the masterpiece.”

So far the picture’s shaping up pretty well. Nijem finished all of his foes on the show, and Ferguson did the same, scoring consecutive knockouts of Justin Edwards, Ryan McGillivray, and Chuck O’Neil to earn his spot in the final match. And while that may sound easy, it isn’t. Yet Ferguson called on a lifetime of wrestling to toughen him up for a string of three fights in six weeks that he is likely to never see again.

That was a lesson learned the hard way, as Ferguson was always looking so far ahead that he was missing what was in front of him. A fighting career wasn’t exactly what his family predicted for him, and after missing the cut on two previous tryouts for TUF, he wondered where he would eventually end up. But finally, the third time was the charm, and with a three fight winning streak leading him into the house, he got his shot at glory and made the most of it. The only hiccup was a near-brawl late in the season with teammate Charlie Rader that made him the talk of the MMA world, maybe even more so because it was the only real hint of raucous drama this season.

“Everybody has a bad night once in a while,” said Ferguson. “I’m not proud of that, and I put full blame on myself. I bottled everything all in and kept it in, and unfortunately everybody saw me when I popped – I was that guy.”

At least it was only for a moment, one that Ferguson clearly regrets. Now the goal is simply to move forward and make people remember him for his fighting, not for one bad night broadcast to the world. And when it’s all said and done, he wouldn’t trade his Ultimate Fighter experience for anything.

“I wouldn’t give it up for the world,” he said. “Even though I almost had a heart attack seeing myself on TV, I’m so happy that I had the opportunity to do that. At the time you’re in the house, it drives you nuts, but looking at it now, the whole experience was amazing and I miss the house.”

As for Tony Ferguson’s journey to Las Vegas, “It’s like any other story you hear from any other fighter that’s successful – it wasn’t easy. But I’m here now.”