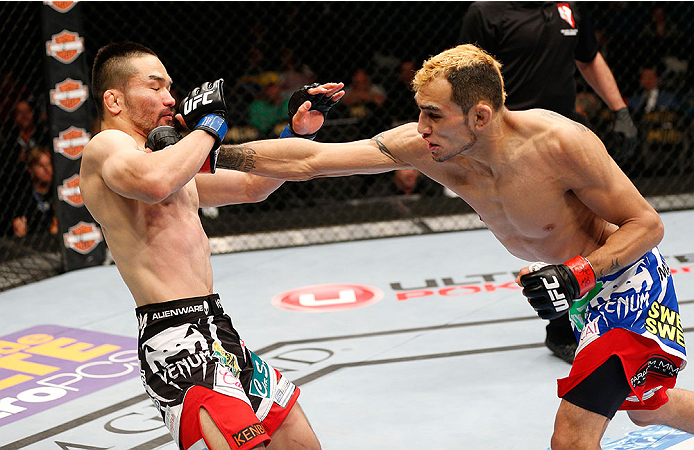 As he prepares for his second consecutive main card appearance in the UFC, you might wonder if Tony Ferguson is starting to get used to being in the spotlight. But as far as the lightweight up and comer sees it, he’s just getting back to where he believes he belongs.

“Before I was in the UFC, I was used to fighting in the co-main event or main event,” he said. “I just thought that there was never any other way of doing it. (Laughs) I always put on a helluva show, so on these smaller cards, I was like ‘you have to put me on the main card, a co-main event or main event.’ I know what I’m worth and I know what I’m capable of doing when I keep my mind to it, and now, it’s awesome. This is where I belong. Yeah, I’m starting the card off (at UFC 181), but I like to start out with a bang and give the crowd what they want for the rest of the card, because it’s going to be a night of explosions. I’m excited to be on that card.”

With two title fights and two heavyweight showdowns, this Saturday’s UFC 181 main card is shaping up to be a memorable one, but as Ferguson and explosive up and comer Abel Trujillo get ready to meet, it’s that fight that could be the show stealer. A pleasing stylistic matchup aside, there is a lot up for grabs for the winner: a continued stay on the main card, a top 15 ranking, and positive momentum heading into 2015. So when you mix two top prospects on the verge of contendership, high stakes, and an intriguing clash of styles, the anticipation is understandable. And that’s not just from the outside, but from the combatants as well, with Ferguson stating that he is doing everything in his power to guarantee that he is putting in more hours than his opponent.

“He’s not working as hard as I am,” Ferguson said. “This past Saturday night (November 22) I’m sure he was taking it easy and watching the fights. I was in the gym, making sure that my stuff is on point, making sure that I know that when my opponent’s resting, I’m working harder than he is.”

Ferguson proceeds to spell out his exhausting training schedule, something that he doesn’t do matter-of-factly, but with an intensity that few share when it comes to discussing training. To most, the fight is the payoff, the pot of gold at the end of a rainbow filled with potholes and roadblocks. To get to the fight, you have to suffer, and no one really wants to talk about the suffering. Ferguson does.

“It’s an epic journey, and this journey is what I signed up for,” he said. “I didn’t just sign up for the beginning or the end. I signed up for the whole ride, and that includes the grind. Everybody didn’t want to line up against Abel because they didn’t want to put in the extra work that it’s gonna take to beat this guy. My keyword and my hashtag for this fight has been ‘finish.’ So when I go to practice, I’m not trying to knock people out, I’m finishing people.”

Since the lone loss of his seven-fight UFC run to Michael Johnson in 2012, Ferguson has finished Mike Rio (submission) and Katsunori Kikuno (knockout) before a close UFC 177 decision win over Danny Castillo, and while the Castillo win wasn’t as spectacular as the two before it, Ferguson believes it served its purpose as far as introducing him to a wider fan base.

“I think so,” he said. “I’m pulling some different things into the game. The last couple fights I showed off a little bit with my jiu-jitsu and didn’t really go for the finish that I should have in the first part, getting a first lock and then staying with it instead of transitioning. The last couple fights were to go out there and show my capabilities, and I wanted to put the lightweight division on notice that I am here. And the world is going to catch up and know who I am, regardless if they like it or not, and they’re going to watch me fight. What I have seen is a trend of people that love the way I fight, that love the excitement that I bring to the ring, and they love my intensity when I talk about my opponents. And that’s what I like about it. I don’t want to be the next so and so, I’m the first Tony Ferguson.”

Some would say it’s already taken too long for Ferguson to get to this point, that an Ultimate Fighter winner with seven wins, four finishes and only one loss should be in the title race, but the loss to Johnson and some key injuries have slowed his progress. That’s all in the past now though, and while it’s been a longer road than the one taken by some, he feels ready for it more than ever.

“In the beginning maybe I would have been more shell-shocked, but being in the Ultimate Fighter house with all the lights and cameras and everything that’s going on there, this has been a very good step-by-step program to get to where I’m at. I’m very fortunate that I did very well on The Ultimate Fighter, and the UFC has given me good fights to build my skill level and to give me the opportunity to grow as the champ that I can be.”

And on Saturday night?

“The one thing that I would love to do is set the lightweight division on notice,” Ferguson said. “I know that I’m going to be going out there before a lot of these big names and I’m not there to fight them or win the championship that night. But they’ll be smart to watch me on that screen when I’m out there because I’ll tell you what, I’m gonna pull out some new stuff and put some new ideas in these people’s head that will mess up their game if they’re watching me. And that’s my biggest goal – I hope I can mentally mess these guys up without even trying to do anything. I want to go out there and put on my best show.”