Tom Watson: On the Road Again 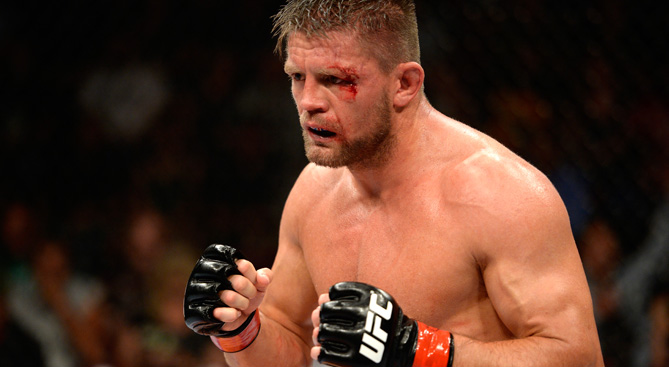 The road traveled by Tom Watson now goes through south Florida. A man who doesn’t shy away from admitting that he’s “been everywhere,” the British middleweight thought he had found home – or at least home for a longer stretch than usual – in southern California, but eventually, all things “Kong” must change.

“Recently, Mark Munoz closed his gym (Reign), and I was in a situation where I was already driving to LA for kickboxing, which was over an hour drive, and with MMA gyms, I went to Alliance, so it was a lot of driving around, and I don’t think it was what I needed,” he said. “If the UFC called me and said ‘hey, you’re going to fight in two months,’ I felt like I was in trouble when it comes to how I wanted to prepare.”

So Watson went to a place he had once logged on his journey through the world of mixed martial arts back in 2011 – the Blackzilians gym in Boca Raton.

“I liked what they were doing in Florida, and I spoke to (former light heavyweight champion and training partner) Rashad (Evans) and (Blackzilians team boss) Glenn Robinson. I came out for two weeks, tried it out, and I said ‘you know what, I’m gonna move here.’ And literally the week I moved here, the UFC called and said ‘hey, do you want to fight in seven weeks?’” 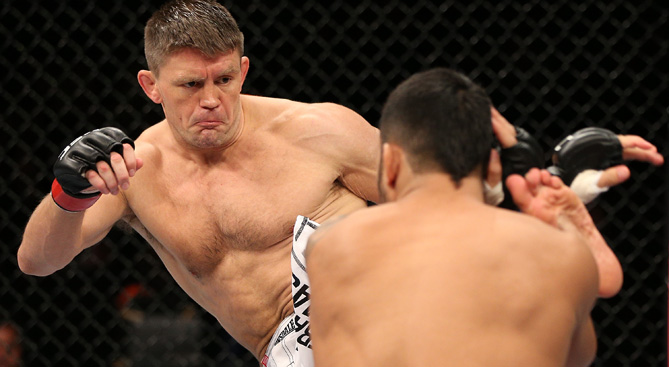 Brad Tavares during their middleweight fight at the UFC on Fuel TV event at Capital FM Arena on September 29, 2012 in Nottingham, England. (Photo by Josh Hedges/Zuffa LLC/Zuffa LLC via Getty Images)" align="right" />On Saturday, Watson returns to the Octagon to face Chris Camozzi in Nashville. Both fighters are at similar points in their career, Watson 1-3 in his last four and Camozzi winless in his last five UFC bouts, a cold streak interrupted by two wins on the local circuit. Beyond the numbers though, the two share the attitude that when the bell rings, it’s time to fight, and often that has led their opponents to take a different tact, leading to a run of controversial decisions and lay-and-pray marathons that they have wanted nothing to do with.

“It’s taken a long acceptance that everybody’s getting smart in the UFC,” Watson said. “A fight in the UFC is three rounds, and I think a lot of people go into a fight with the fact in mind that if you win, it’s (I get paid) double what you get to show up, and it’s ‘let’s play a tactical game.’ And in pretty much all my fights, people have taken the smart way, where they think ‘I’m not gonna knock him out, I’m probably not going to submit him, so if I can just score a couple takedowns, I don’t care if he gets back up; I’m winning the round because I’ve scored two takedowns.’ I’ve got to stop that, because if I’m going to fight under these rules, I’m losing fights where I feel like it’s not even a fight. It’s like I’ve lost a strategy battle. So I think I’ve got to change my style a little bit. It takes two to tango, they say, and I can’t just rely on the other person coming to tango.

“That said, I think Camozzi is kind of similar to me in that he’s never been knocked out, and in the fights I watched, he comes forward pretty much all the time, and he’s suffered a lot of the similar problems with people taking him down and him losing decisions,” Watson continues. He’s obviously frustrated with the way his fights have been going, almost to the point where he feels he has to play that game in order to stay competitive in one of the sport’s toughest divisions. Yet at the same time, the 33-year-old Southampton native makes it very clear that he’s not imploring his fellow middleweights to stand and trade with him (though that would be nice), but that if you’re going to fight – whether on the feet or the mat – fight him.

“One thing that irritates me is that people say ‘oh, this guy is gonna come and stand with me,’” he said. “It’s a mixed martial arts fight, so if I want a striking fight, I should go and fight kickboxing or shut up. So for me, it’s not that. I think people have come into fights against me where they’re trying to take me down, but they don’t really care about what they’re gonna do on the ground or if they can keep it down, but instead it’s let’s break up the action with a few takedowns and stalling. I’ve got to change that because they’re only able to do that because I’m letting them do it.” 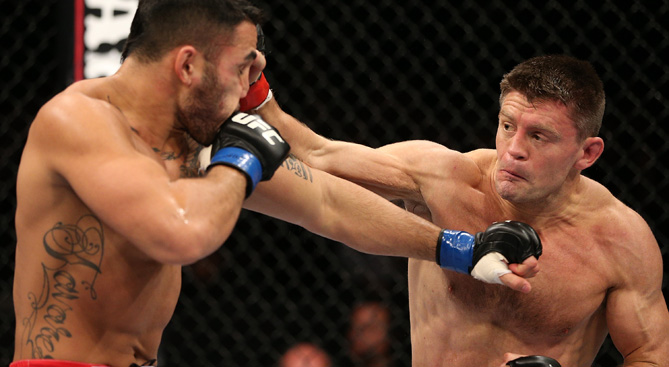 So while Watson may be stubborn, he’s also one of the smartest fighters in the game, which means if he needs to change something up to be successful, then so be it, and after his move to Florida, he believes he’s done what he needed to do to beat Camozzi. Sure, it was a risky move to go cross country and switch things up while competing at the highest level of the sport, but he doesn’t see it that way.

“I think anything can be a concern if you let it become a concern,” he said. “I was always under the impression that wherever I went, it was more places to learn, more experience, and I view this the same way. The first thing I said when I spoke to the coaches was ‘listen, I know we have seven weeks, but this, for me, is a journey of years.’ I’ve trained for over a decade. Just last week I realized that I had my first fight nearly 15 years ago. A lot of things happen in fights, but you can’t always say ‘well, I did this because of what I did in this training camp.’ Maybe you did it because of something you picked up seven years ago. But this is probably the first gym I’ve been to that feels like I’m part of an actual sports team, where everything is included in the gym. The nutritionist is on site, the strength and conditioning and all the coaches are on site, they all communicate with each other and work a program together. They have the recovery room on site, and everything is there; it’s much like being a part of an NFL team.”

And Saturday is game time, though don’t expect Watson to put any outside pressure on himself before he makes that walk to the Octagon. It’s not his way, and it never will be. This is a fight, nothing more, nothing less, and it’s that moment when the gate closes and the referee starts the bout that Watson relishes.

“Life is an opportunity,” he said. “I don’t know what’s coming today, let alone tomorrow. I’ve always thought people get carried away saying they’re fighting for legacy and this and that. I just like to fight. It’s not something I’m doing for anybody else other than myself.”