Tom Watson: More Globetrotting with the International Man of Mystery

"I just want to go out there and have exciting fights and I’d like to be able to look back and say what a great fight that was." - Tom Watson 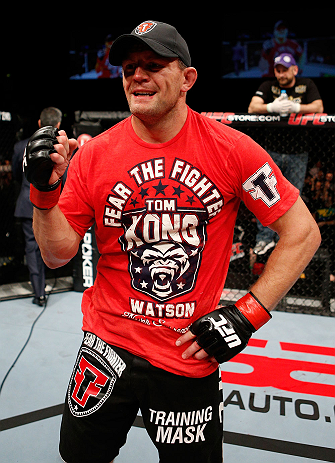 Middleweight veteran Tom Watson has his first UFC victory, two bonus checks for that win over Stanislav Nedkov in February, and a main card debut coming up this Saturday in Brazil against Thales Leites. He’s even apparently found a home in California these days.

“Let’s not get carried away,” he quickly clarifies. “I’m still an international man of mystery. California’s a hub, let’s just call it that.”

That’s the way we like the Southampton, England native, still fiery and never content. It’s why he continues to search the globe for new experiences, both personally and professionally, like his recent stint working with the coaches of Taiwan’s bobsled team. Yes, bobsled team.

“I’ve worked on my explosion and my footwork, just trying to get my feet moving a lot for this fight, which I think has been a problem for me in the past,” he said. “I’m just trying to focus on that within the structure of what you would do for the bobsled.”

After a stint studying camel wrestling in Egypt before the Nedkov fight, it’s clear that nothing’s off limits when it comes to studying and improving his craft, one that he defended after his first Octagon win when he took aim at what he called an epidemic – TRT usage.

“It just gets ridiculous,” he said. “Fighting to me is a sport that is far more dangerous than throwing a discus.”

It was a bold call, but not a surprising one considering the man making it. Watson is a fighter’s fighter, no nonsense to the core, and a well-informed athlete with a sense of history when it comes to combat sports. The way he sees it, if there’s not a level playing field, why even bother applauding your own accomplishments.

“I train two-three times a day every day year round, my diet’s immaculate, I don’t really drink, and I was born with good genetics,” said Watson. “I just find it baffling that people want to go and do this. Do they want to look back and think ‘well, did I really do this, or did I just have better drugs than the other person I’m fighting?’”

The post-fight interview may have garnered him even more fans than his thrilling war with Nedkov did, which is some feat considering how good the back-and-forth scrap was from start to Watson’s Knockout of the Night finish at 4:42 of the second round. That’s par for the course with the Brit’s fights though, even his Octagon debut loss to Brad Tavares last September. But these days, winning is of paramount importance, even if great performances will keep your job safe for a while. So getting that first UFC win out of the way was a big deal.

“It obviously is a relief,” said Watson of the Nedkov victory. “I thought I had a good first UFC fight. It was exciting and people told me after it ‘oh, we followed your career and that was the best fight you had.’ But everybody else just says ‘well, you lost,’ and that really counts in the UFC. So obviously to get the win and get the two bonuses was great for me. It doesn’t really bother me too much what other people think though; I just want to go out there and have exciting fights and I’d like to be able to look back and say what a great fight that was. I’ve had some good fights, and the Nedkov one was right up there as one of the most entertaining I’ve had.”

He’d love a repeat on Saturday against the returning Leites, a longtime contender who is back in the Octagon for the first time since 2009. The Brazilian is 6-1 in his last seven non-UFC bouts, but despite that streak and going 5-1 in his first six UFC bouts, he is probably remembered by hardcore fans for his last two Octagon outings, lackluster showings against Anderson Silva and Alessio Sakara.

“I think he gets a lot of stick for his fight with Anderson, and that really wasn’t a great fight, but Anderson was also involved, and I think people forgot how much stick that Anderson got for that fight as well,” said Watson, who actually trained with Leites’ Nova Uniao team for a brief period seven years ago. But when it comes to the prospect of Leites dragging him into a less than compelling affair this weekend, “Kong” insists that won’t be the case.

“People that aren’t exciting fighters, I’ll make them fight exciting,” said Watson. “If I play his game and how he wants to fight, it’s not gonna be that exciting. But that’s not gonna happen. I’ve got that kind of style where he’s got to fight and he’s got to entertain. If he doesn’t, it’s gonna be a very quick night.”

And maybe another bonus for the international man of mystery. That probably won’t make Leites’ countrymen too happy, but Watson isn’t too sure about that.

“I kind of look forward to it,” he said of fighting in Brazil. “The bigger the crowd the better I perform. I’ve had similar scenarios to this in Canada when I fought and I managed to turn the crowd around. So that’s my plan; to go out there and win some new fans.”