Tom Watson and the Reason Why 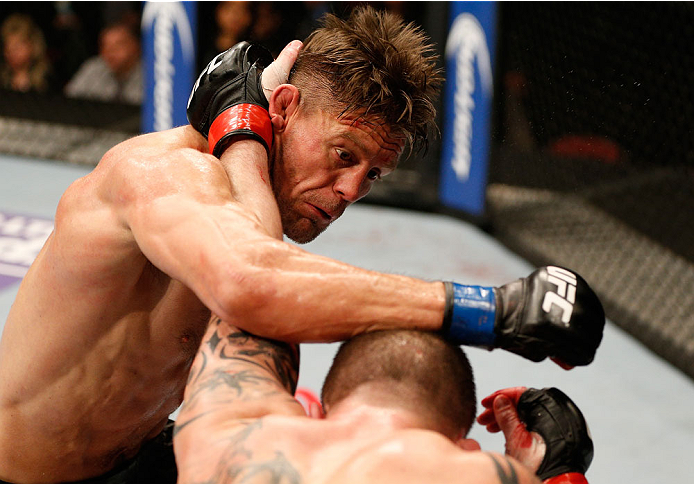 Tom Watson could be excused for sometimes feeling like a stranger in a strange land. That doesn’t refer to him being an Englishman living in Southern California, but it has more to do with having an approach to the fight game that may not be shared by his peers.

At least not the majority of them.

But there are a few kindred spirits, like former teammate Clay Guida. Watson was in the same Jackson’s MMA gym with the featherweight fireplug back when he was helping prepare Brian Stann for an upcoming fight, and as the two looked at the Octagon sitting in an empty arena, Guida couldn’t contain his excitement.

“He (Guida) stopped and said ‘this is awesome, this is why I love this, this is what I live for,’” Watson recalled. “Nobody’s around, he’s not saying it for anyone else. That’s just who he is. And I thought, that’s why he’s beaten so many people he shouldn’t beat. If you give him a choice, that’s where he wants to be, whereas 99 percent of people would sooner be somewhere else, if truth be told.”

At 32, Watson is exactly where he wants to be. On Saturday, he steps into the Octagon for the sixth time to face Brazil’s Rafael Natal. He is coming off a win over Sam Alvey in August that snapped a two-fight losing streak, but to the Southampton native, wins and losses are relative.

“I don’t see any fights I’ve had in the UFC as a loss,” he said. “That sounds strange when I say it to people, but for me personally, what is a fight? It’s combat to a finish. If you go back in the day or take the rules of the contest out, yes, it’s a sport for television and for acceptance, but it’s a fight. Just because somebody’s winning on the judges’ scorecards or they’re taking me down, technically for me, I’m 1-0 in the UFC. I finished (Stanislav) Nedkov. The other fights were on the scoring system. Of course you need to play by those rules, but that’s not a finish, and I think (UFC President) Dana (White) and a lot of the guys in the UFC get stick because they expect a finish. A lot of people say at the top level it’s not easy, but that’s what it’s about. A finish is a conclusive result and that’s what you need. So for me, I’m 1-0 in the UFC, and I don’t really regard wins and losses the same as everybody else.”

On the Watson scoring system, that turns his 17-7 record into a 9-2 slate, and he would probably be happy with that, simply for the reason that when it was over, there were no doubts. Someone was finished and someone did the finishing. It brings back memories of the early days of the UFC, when the fight was over when it was over, not when the time ran out or when judges got involved. Watson, who turned pro in 2006, 13 years after UFC I, could see himself fitting in well back in the days many referred to as “No Holds Barred.”

“I think a lot of fighters would prefer that,” he said. “Knowing my personality and the way I am, that fighting suits me way better. I grew up boxing and watching a lot of it, and boxing is something to me where the professional game is so different to the amateur game because of the longer rounds. Yes they have a break between each round, and now it’s 12 rounds instead of 15, but you see a lot of fights completely different when they’re that time period. And I still think of the UFC model of three rounds as an explosive sprint. Before I signed with the UFC, I was fighting five rounds and that suited me better. I think for the first year or two years, I had to really adapt because I wasn’t in five round fights. It’s a different game.”

And as such, Watson has had to do everything in his power to stay up with the changing nuances of modern mixed martial arts. Fortunately, he doesn’t do so as a cranky curmudgeon unable to deal with change, but as an eager student of the sport willing to do whatever it takes or go wherever he needs to go to get that knowledge.

“To me, it comes down to two types of people in the world – you either want to win or you want to lose,” Watson said. “That’s capitalism, that’s the world we grew up in, and essentially to win you have to go out there and do stuff. And for me, I didn’t want to be somewhere and think ‘what are these guys over there doing in Canada? Are they doing something I don’t know?’ So I would go there. And it is uncomfortable going to these places. I remember going to gyms in Holland and thinking ‘these people are trying to kill me.’ (Laughs) But that’s how it is when you go somewhere new. It’s a lot different when you’ve been somewhere for a year and I think sometimes fighters have to do that to reinvent themselves because they get very comfortable. I remember (UFC vet) Paul Daley used to say to me that he would try to go to a lot of different places too because it takes you out of that comfort zone where you’re just going through the motions.

“It really just is about learning,” he continues. “Often I find myself going to bed at night thinking ‘why don’t I have more time in the day?’ I really feel like ‘damn, I wish I could have read more today’ or ‘I wish I had an extra hour to do this.’ 24 hours is a relatively long time, but I feel that’s my personality. I could be learning more, there’s more I could be doing, and I have a thirst for knowledge. If I’m gonna do something, I want to do it the right way.”

For the last few camps though, the wandering Mr. Watson has found a steady home in Southern California, where he works with the Reign and Dynamix teams. He spent more time overall with Jackson camp in Albuquerque, but as he points out, “This is the first place I’ve lived at which is arguably my home, other than where I grew up.”

That could be a shock to those close to him, that he’s finally put his bags down and actually unpacked them, but he doesn’t think so, though he does understand that’s the impression some outside his inner circle could get.

“Sometimes when I talk to people and I say ‘oh I’ve trained with this guy and I’ve trained here,’ as I’m saying it I sometimes feel like ‘damn, you’re like someone who must be shady; you go to one gym and then go here and train there,’” he chuckles. “But I don’t really feel like that. Everywhere I’ve trained, I’m still pretty good friends with the people there. I still speak to a lot of people from Tristar and Jackson’s, I’m still good friends with Rashad (Evans), who’s in Florida, and now in California I’ve got great friends here. Maybe it’s an inquisitive nature from me.”

Or maybe it’s just the continuation of a journey that began when he was a young man in England trying to answer a simple question.

“I always felt, growing up, can I really defend myself?” he said. “I never really had any confidence. If a situation came up on the street, where I was in severe danger, would I actually be able to defend myself? That’s what pushed me to it, and being competitive changed it.”

Tom Watson can defend himself. So what follows after that? World titles, a legacy for the history books?

“Everybody gets carried away with their legacy and this or that, and I’m realistic,” he said, noting that those who talk too much about how they’re going to be remembered are missing the point entirely. “Your egos are out of control. This is a fight, it’s important to you and maybe a few people around you, but other than that, it’s important for 15 minutes or however long the fight is.”

So why fight then?

“I enjoy fighting,” he said, the simplest comment yet from a complex man. “For a while I thought, what am I doing? I’m almost, what is referred to in England as a meathead, a goon. ‘This guy’s got no brain, he’s just sacrificing his body,’ but no matter what I’ve done, this is something I seem to enjoy. I don’t necessarily like the training sometimes, but you put those gloves on and you put the Octagon out there and I want to fight. I don’t know if Natal is like that. I don’t know if a lot of guys are like that.”