Tom Lawlor's Back - And You Know What That Means

"Being away for a year, I really have the itch to fight, and after this fight I want to fight more often." - Tom Lawlor 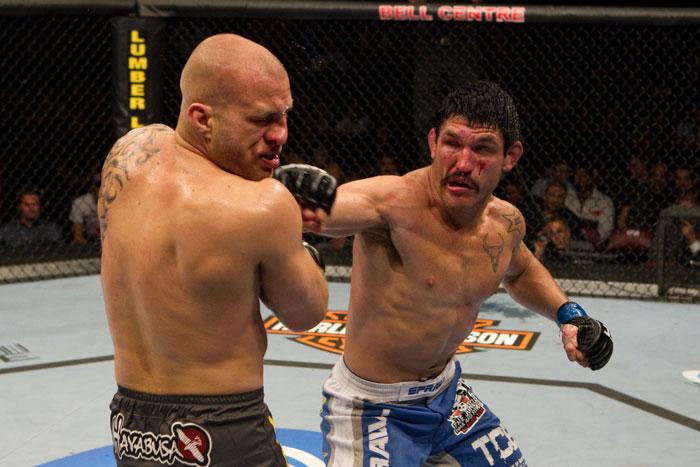 There’s no denying that Tom Lawlor is entertaining. From the Hulk Hogan entrance complete with feather boas, t-shirt ripping and “Real American” blaring, to the pre-fight weigh-ins dressed head to toe as Dan “The Beast” Severn at UFC 113, “Filthy” Tom knows a thing or two about showmanship and, simply, having fun. As he prepares for his UFC 139 bout with rising middleweight star Chris Weidman, Lawlor is focused on a lot more than planning a memorable walkout; he is planning an upset.

“I would say that played and plays a huge part in being able to motivate me,” explains Lawlor. “In the past there has been a fight or two that I wasn't as motivated as I should have been. If you're a competitor there is always something that needs to drive you and if you don't have that then you're not going to perform at the best of your abilities. You're not going to put forth everything and you're not going to do everything you can to win the fight. The fact that there are so many MMA websites and so many people with their lists that tout Weidman highly, it really does drive me. On betting odds, I'm a 2-1 or 3-1 underdog, so I'm definitely pumped up for this fight. I'm pumped up to fight Weidman, I'm pumped up to fight his aura, his hype train - I'm ready for it all.

In his first fight in over a year, Lawlor wants to mark his return to the Octagon on November 19th with a win against the top MMA prospect. It has been a while since UFC fans have seen any pre-fight antics from Lawlor, since his last cage appearance was in October of 2010 at UFC 121 against the heavy handed Patrick Cote. The dominant unanimous decision win over Cote snapped a two fight losing streak which started with a razor thin split-decision loss to Aaron Simpson followed by a second round submission loss to Joe Doerksen. Add to the mix Lawlor’s lightning quick guillotine choke of CB Dollaway, and he has fought four well-respected and recognizable names at middleweight in the UFC prior to Weidman.

“A lot of people look at him as a real big prospect for this sport and some people think he might challenge for the title in the future, but in my opinion he is still young in his career,” says Lawlor. “He has a lot of competition experience in wrestling and in grappling, but he's still kind of putting it together as a mixed martial artist. I think I have a couple more years experience on him even though I don't have many more fights. I've been training and doing everything else like working on striking and blending everything together. On paper and the odds, I'm sure I'm the underdog. I've gone against guys who on paper are better wrestlers than me in the past and fought against guys who are better strikers on paper than me in the past and none of it ever deters me. I'm going to go out there and do what I do. I've seen some things in Weidman's game I think I can exploit. The people who think he is going to run over me because he has a better wrestling pedigree than me will be sorrily mistaken.”

For a guy who is revered in the MMA blogosphere mostly for dressing up as an esoteric early days of UFC reference, Harold Howard, at a weigh-in, Lawlor is a solid, well-rounded fighter who owns a “Submission of the Night”, a “Fight of the Night” and a recent win over a former number one contender. At 3-2 inside the Octagon, Lawlor also holds the only UFC victory over fellow Ultimate Fighter season 8 alum Kyle Kingsbury at light heavyweight. On top of that, he looked at his best in his previous outing, manhandling Cote for three decisive rounds. Plus, the fight should have ended in the first with Lawlor’s arm-triangle choke, but Cote escaped by slyly grabbing onto the fence and pulling himself out of the attempt without the referee noticing the infraction

“Honestly, during the fight I felt no danger,” asserts Lawlor. “I felt like I could have done what I wanted. I didn't stand up and throw down with him because that's where he's the most dangerous, but I really wasn't scared of his standup either. I feel like I could have stood with him and thrown down, but I had such a clear advantage on the ground that I wanted to keep up the pressure and not let him do anything. I pretty much shut him down for 15 minutes and it might not have been the most exciting thing to watch, but that's a guy who fought for the title before and is pretty well regarded. I was able to do almost whatever I wanted.”

At 28 years old, the four-time NCWA All-American wrestler from University of Central Florida has spent the past year working on himself outside the cage. Following the Cote bout, Lawlor participated in a tour for the US troops where he injured his knee training with a few fellow fighters, which did sideline him from cagefighting for a little bit. Most of Lawlor’s time off has been spent in a series of new gyms in a familiar area of the country. It’s been an unexpected, but welcomed, time off, where he has gotten to sharpen and improve his skills while properly rehabbing injuries.

“At the beginning of the summer, I relocated up to the New England area,” tells Lawlor. “I trained there before my last fight. That's where I originally grew up. I had moved down to Florida and that's where I had been training for the past 10 years. I had gone ahead and moved back home and moved to Providence, RI. I train at a couple different places. I have a great strength coach in Kyle Holland, who also works with Joe Lauzon and Kenny Florian. I work with the same boxing coach that Joe does, Steve Maze. I go up to Joe's gym a lot to spar with the guys he has there. I train five or six times a week at a phenomenal jiu-jitsu place, Tim Burrill's BJJ. He also coaches Jorge Rivera and Mike Campbell, and there are a lot of good guys that I have been sparring with in New England. Currently, I'm at Team Quest in Temecula, California getting ready and putting the finishing touches on for this fight. It's a great camp and there are a lot of good guys my size here. It doesn't hurt that Dan Henderson is here getting ready to fight in the main event as well.”

Although Lawlor has not fought in 2011, the Weidman bout will be the third Lawlor’s been scheduled to be in. He was set to take on Maiquel Falcao at UFC 134 before Falcao was released, which led to Lawlor being matched up with Kyle Noke at UFC Live in August. In the training camp for the showdown in Milwaukee, Lawlor injured his arm, leaving him unable to punch and unable to continue with the fight. Nevertheless, Lawlor has been basically training for this return to the Octagon for the past nine months with a few hiccups, but he will have a renewed vigor to fight going into this bout against the undefeated Weidman.

“I feel like I'm a better person than I was a year ago,” admits Lawlor. “Being away for a year, I haven't been working for a year. There have been a lot of things going on, from not having money, making a big move, buying a house, and a lot of things have gone on that really put things into perspective in the grand scheme of things. In a way, it excites me even more to go ahead to fight. I'm not as nervous to fight. Being away for a year, I really have the itch to fight, and after this fight I want to fight more often. I realized that your window is only open for so long in this sport, and to be out for a year is pretty big. I should be in my physical prime right now, even though my physical prime was probably when I six, so I'm way past my physical prime at this point. Taking a year off doesn't seem like a waste and probably will be good for me in the long run, but I'm definitely itching to get back in there and continue fighting more often.”

This weekend, Lawlor wants to derail the hype train behind the young gun Weidman. And soon enough, his absence will only be a memory to fight fans, as he is preparing the expected tour-de-force of weigh-in and walkout hi-jinx, as well as the in cage grit and toughness that earned him his spot in the UFC. As Lawlor prepares to meet Weidman head on in a fight that will re-establish him in the UFC’s middleweight division, in typical fashion, Lawlor is doing it with a wink and a smile.

“The number one thing I'm going to show off in this fight is my physique,” divulges Lawlor. “I'm getting prepared to make a run at the Mr. Olympia 2012 title; a lot of people don't know that. I've had a lot of time to work on my vascularity and my body building. Also, I have a new hair cut and a new beard, so those are things I will show off as well. You're not going to see too much difference in the way that I fight. I'm not going to say I'm going to look intimidating, but I'm going to look damn good - that's for sure.”

A year on the shelf for Lawlor to prepare for a fight and to come up with a weigh-in costume will no doubt be entertaining.