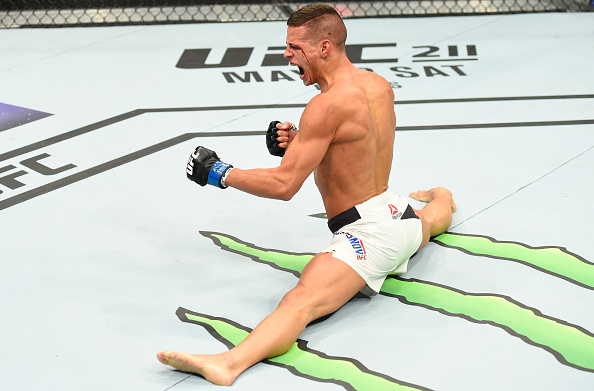 After starting the fight with some wild haymakers, Williams got the fight to the mat, but Duquesnoy rose to his feet quickly. Williams continued to be the busier of the two though, and with two minutes left, he rattled Duquesnoy with a right hand. The Frenchman returned the favor 30 seconds later, and he began finding his range even though he was now sporting a cut over his left eye. Just before the horn, Duquesnoy dropped Williams with a left elbow, and the tide had turned.

As the second began, Williams looked exhausted and Duquesnoy pounced, with a right elbow to the head dropping the Floridian and bringing referee Keith Peterson in to stop the fight at the 28-second mark of round two.

Nelson didn’t have much difficulty closing the distance on his 6-foot-7 foe in the first round, and after putting some work in, he took Volkov down and kept him there until referee Dan Miragliotta restarted the bout in the closing minute. From there, Volkov opened up with both hands, scoring with several blows while taking some “Big Country” rights before the horn sounded.

In the second and third rounds, Volkov was largely able to keep Nelson at bay, and fatigue was an issue for the Las Vegas veteran, who got off some more right hands but wasn’t able to capitalize, allowing “Drago” to stick and move his way to the win.

The first round was competitive and close, with Green perhaps holding an edge, but not by a lot, as neither landed too many telling blows.

In the second, Magomedov landed a left hand that opened a cut over Green’s eye, with Green claiming it was an eye poke. Replays showed otherwise, and the action soon resumed, with Magomedov landing more and more shots before Green clinched with him against the fence. After breaking, Magomedov got a quick takedown, but Green scrambled back to his feet immediately, and the two battled on even terms to the horn.

The back-and-forth battle continued in the final five minutes, neither fighter able to truly pull ahead, and this closely contested action was reflected on the scorecards, which read 29-28 twice and 28-29 for Magomedov, who improves to 20-2. Green falls to 23-8.

The Ultimate Fighter 24 winner Tim Elliott scored his first UFC win since 2013, shutting out Hawaii’s Louis Smolka via unanimous decision in front of his hometown fans in Missouri.

Elliott raced out of his corner and shot for a takedown immediately, getting it with ease. On the mat, Elliott sought a guillotine choke and when that came up short, Smolka escaped to his feet, only to get caught with some strikes from the local favorite. The fight went back to the mat five more times, the fifth trip opening a cut over Smolka’s right eye but also allowing him to fire off some ground strikes before the round ended.

The frenetic pace didn’t let up in round two, with the tireless Elliott continuing to make Smolka’s night miserable. The Hawaiian was gritty and competitive throughout, but Elliott’s non-stop attack kept him a step ahead throughout.

It was no shocker that the final five minutes played out like the first ten, with scrambles and ground battles continuing to excite the crowd. But when three scores of 30-27 were read, there was no question that Elliott was the winner, much to the delight of the crowd.