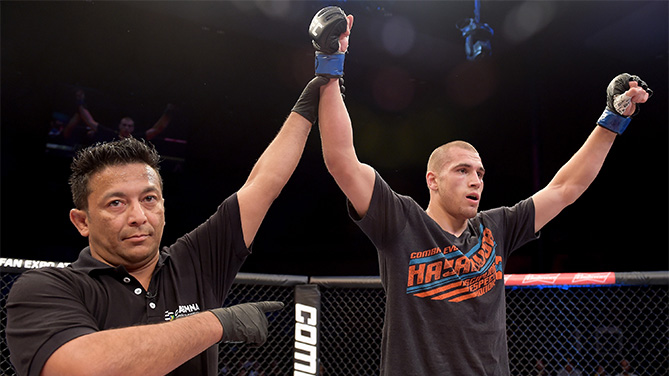 Standing outside the old warehouse building in Montreal’s Rue Ferrier, only the famed red star window stickers reveal to seasoned MMA fans that behind those walls, some of the sport’s biggest stars have honed their craft en route to establishing memorable legacies.

Now that the first generation of Tristar Gym’s elite fighters is slowly exiting active duty, the team’s fresh faces are determined to take center stage back. Led by recent title challenger Rory MacDonald, a crop of auspicious talent gears up to soon make noise on the sport’s biggest stage. One of the most promising figures is Tom Breese.

Breese, a Birmingham, England native, might have found his passion for the game on the mats of a local gym at sixteen, but the foundation of his most recent success was laid in Canada’s cultural capital, where the 24-year-old relocated full-time last year.

Originally added to the Tristar team on a temporary basis to help Georges St-Pierre prepare for his UFC 158 bout against Nick Diaz in 2013, Breese quickly realized that while he had certainly provided help for the superstar, he was ultimately the biggest beneficiary of the whole trip. In his mind, the highly touted welterweight prospect felt that his dream of reaching the sport’s biggest heights could become a reality with the kind of training and coaching he could get at MMA mastermind Firas Zahabi’s renowned camp.

Before he knew it, he had switched from a nearby hotel room that GSP had rented for him for the duration of his stay to a frail bed inside the “Tristar Dorms” – a spare fighter apartment right next to the gym. After having to recover from a torn ACL for more than a year, Breese came back last summer and, this time, he was to stay.

The Englishman’s new lifestyle is just what you would imagine a real fighter’s everyday life to be, only probably not as glamorous or even exciting as you might expect. Apart from two training sessions a day, life at the dorms mainly consists of watching fights with teammates and resting up amidst thin walls, a dirty kitchen and scattered training equipment while waiting for practice to start over.

“The dorms are very boring. But it’s kind of good because it forces you to train,” Breese says of his current, self-chosen lifestyle outside of the Octagon’s bright spotlight. “Obviously, there are times in the dorms when it gets lonely, (but) there’s a good bunch of guys in the dorms. I kind of feel like we have a little family going on here. You train together, you eat together and you have the same dreams and goals. It becomes kind of like a family, like a brotherhood.”

It didn’t take long for Breese to fully immerse himself into the community that has hosted a long list of UFC notables over the past few years such as Jonathan Brookins, Mark Bocek, Alex Garcia or current FOX Sports 1 analyst Kenny Florian. While these fighters have since moved on to other homes or gyms, the level of talent has remained just as high – Breese is now building bonds with the likes of UFC flyweight Zach Makovsky and former Titan FC featherweight champion Desmond Green. Training under Coach Zahabi alongside a long list of elite fighters takes away much of the sting of leaving behind the comfort zone of living in a more familiar environment.

“When I was home in England, I had my own place and everything; it was more comfortable, but the training wasn’t the same. I’m willing to sacrifice living comfortably to be able to train here. This is a hundred percent the route that I want to go. The most important thing for me is chasing and achieving my goal of becoming the best fighter I can be. I feel like if you don’t have a goal then what’s the point of even living?”

With the inspiration provided by teammates like St-Pierre and his own breakthrough looming on the horizon, Breese has dedicated his whole life to mixed martial arts. And while that might sound like a worn-out cliché, Breese actually embodies the literal meaning of this perceived empty phrase. Occasional cheat meals, vacations, Montreal’s notorious nightlife or too many friends outside of the fight game would provide distractions that Breese now vehemently tries to keep away from his life.

“I want an environment where I can dedicate myself a hundred percent to training. Also, I’ve got to give the maximum effort to look after my body. Your body is a machine. If you drink alcohol or eat bad food, this machine is not going to be fueled very well. It won’t perform as well as it could. I feel like if I treat my body carefully, I’ll be able to perform a lot better. Performing better means more to me than having little highs like eating bad food and drinking alcohol.”

Even a relationship would have to meet different criteria than for most people.

“It’s not that I’m looking for a girlfriend or anything, but let’s say if a girl came along, it’s not like I’d decline it. I had a girlfriend in the past and I never missed a training session because of a girl. I would have been very disappointed in myself if I had done that. Training, for me, is always going to come first. My main goal and my focus is to be the best I can be in MMA, a champion and whatnot. But as a human I kind of feel that everyone has that goal that they want a family in the end.”

As strange as that sounds, but if everything goes well, that chapter of his life will have to wait for another decade or two, because right now, his career is only getting started. The path that Breese chose for himself might make life a grind for months at a time, but when it’s time to put the pieces together, the sacrifice and dedication are paying off. After successfully returning from a torn ACL in November of 2014, keeping his undefeated record intact, Breese signed with the UFC the following March and traveled down to Brazil to make his debut in enemy territory two months later. While Breese admits that he used to get nervous before fights earlier in his career, he was “as calm as never before” when he finally stepped into the Octagon for the first time at UFC Fight Night: Condit vs. Alves.

Five minutes later, Breese had added a first-round TKO of local favorite Luiz Dutra to his résumé, earning him the kind of debut every fighter dreams of. He ate a couple of shots in the early going, but managed to drop Dutra with a straight left before finishing him off on the ground with seconds left in the round. While he admittedly felt simply happy when he got his hand raised, perfectionism kicked in once the adrenaline faded away in the wake of the fight.

“I wasn’t at my sharpest,” Breese said, recalling his thoughts after heading back to the locker room. “There are a lot of things that I have to work on in training. I mean, I was happy that I got a TKO, I showed that I can knock people out because people thought I was just a submission guy, but they haven’t seen anything yet. That was nowhere near the best Tom Breese.”

If he can unleash the “best” Tom Breese in future fights, that might be a scary thought for the rest of the welterweight division. For now, though, it’s back to the grind, on and off the mats.

“It’s definitely another level that I’ve reached in my career,” he says, looking back at his introduction to the UFC’s audience, the first step of many on the path to fulfilling his potential. “At the same time, every fight should be a jump to the next level. I’ve passed every test that was put in front of me; I’m winning and winning, so every single fight means I’ve progressed to the next level. I’m happy that I’ve reached this level now and I’m sure my next opponent will be the next step up.”

Tom Breese returns to the Octagon on October 24 to face Cathal Pendred in Dublin.