As He Continues His Climb Up The UFC Heavyweight Ranks, Tom Aspinall Is Excited To Showcase He's Ready For Big Fights.
By E. SPENCER KYTE, ON TWITTER @SPENCERKYTE • Sep. 1, 2021

Ask most athletes how they’re feeling, mentally and emotionally, before the next massive test in their professional career and you’ll get responses that range from simple, plain, and totally rehearsed to boisterous and over the top.

“I feel great” to “I was built for this” are usually the two end points, with myriad answers carrying varying degrees of truth, confidence, and transparency scattered in between.

Just a handful of days ahead of making the walk to the Octagon for the fourth time, I asked surging heavyweight Tom Aspinall for an assessment of what he’s done thus far and where he’s at as he readies to take on Serghei Spivac on the main card of Saturday’s UK-heavy early offering from the UFC APEX.

“To be honest, each and every time, I get more nervous because each fight is bigger than the last fight because I’m winning and having good performances, so there is more pressure there,” the streaking Team Kaobon representative admitted, offering a rare and honest response to a question that is usually met by self-congratulatory comments and promises of future championship success.

After earning three victories and three finishes in eight months to begin his UFC journey, Aspinall has every reason to sing his own praises. He’s coming off a second-round submission win over a former champion in Andrei Arlovski and, at 28, he’s already cracked the Top 15 and positioned himself at the vanguard of the new wave of emerging names working their way up the divisional ladder.

Instead, he acknowledged the pre-fight nerves that continue to build as he continues to win, and the deep, meaningful relationship he’s cultivated with those feelings over the years. 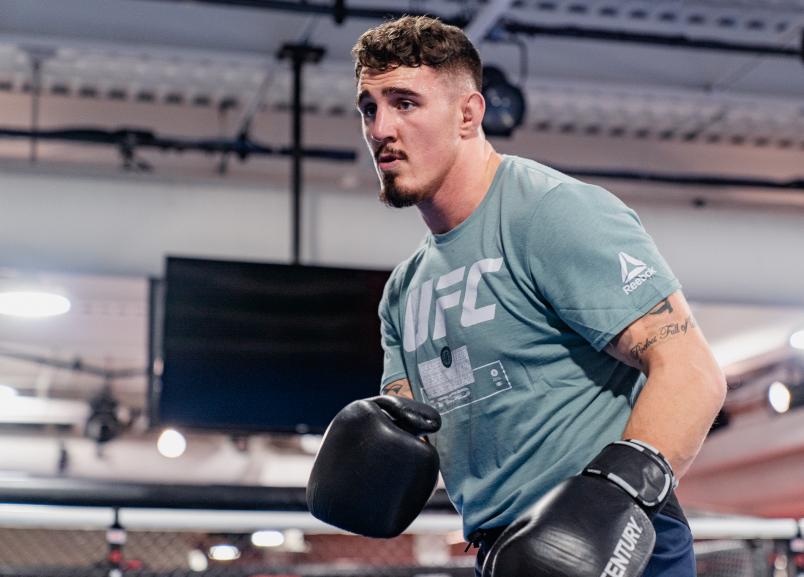 Tom Aspinall trains for his fight at UFC Fight Night: Blaydes vs Lewis at the UFC Performance Institute on February 17, 2021. (Photo by Zac Pacleb)

Tom Aspinall trains for his fight at UFC Fight Night: Blaydes vs Lewis at the UFC Performance Institute on February 17, 2021. (Photo by Zac Pacleb)

“But I thrive under pressure,” he continued. “Me and fear have an amazing relationship. The more scared I am, the more dangerous I am, so I see it as a good thing.

“I used to feel like fear was the enemy. I used to have two fights — me against my opponent, and the even bigger fight was me against fear — but now I use fear. I’ve got a wife, but fear is my mistress. I have a very good relationship with fear; we work together so well. The more fearful I am — it just helps me with so much.

“I don’t perform well in the gym, to be honest,” Aspinall added, continuing to share truths that run in contrast to the traditional approach of always putting yourself over, even if it means embellishing or leaving certain things out. “But if you get me scared, I’m going to perform over and above what I’m capable of usually.”

Thus far, Aspinall must have been shaking like a young E. Spencer Kyte after seeing the climax of Arachnophobia for the first time because he’s looked outstanding inside the Octagon, earning rapid first-round stoppage wins over Jake Collier and Alan Baudot last year before submitting Arlovski in February.

Aspinall having success with his hands in each of his first two outings didn’t come as a surprise to anyone, as one of the big talking points surrounding the British UFC neophyte heading into those encounters was the time he’d spent away from mixed martial arts and pursuing boxing, including training with “The Gypsy King” himself, Tyson Fury.

But that February engagement was the first time he’d shown his grappling acumen in the Octagon, and it caught some by surprise, though that probably shouldn’t have been the case.

“If people actually did real research, they would see for the first five or six fights, I had absolutely no striking at all; my striking was terrible,” he said with a laugh. “I’m from a jiu jitsu background originally, and it’s easy enough to find on the Internet, if you look for it, but people have heard the Tyson Fury stuff and that I have some boxing experience, but it doesn’t really matter.

“My father was one of the first jiu jitsu black belts in the United Kingdom,” continued Aspinall, a black belt under his father, Andy, the long-time jiu jitsu coach for Team Kaobon. “He’s a UK BJJ pioneer, so he’s pretty known in the UK and sooner or later he’s going to be known internationally as well because of what I’m doing.

“You saw it in my last fight that I can submit people if I need to,” he added, referring to the quick rear-naked choke he locked up on Arlovski after barreling through the divisional stalwart with a well-timed, powerful takedown. “So it doesn’t really bother me if they know or don’t know.”

If they didn’t know then, they certainly know now, and on the off chance that they’re still in the dark, there will be ample opportunities to be brought into the light, beginning this weekend, when Aspinall steps in opposite Spivac in Las Vegas.

Initially slated to meet Sergei Pavlovich, the shift in opponents came towards the end of last month, though “The Polar Bear” is not an entirely new adversary for the streaking British rising star.

“I was supposed to fight Spivac last year in my second UFC fight and that didn’t happen, so although I haven’t prepared for him this time, I have prepared for him before,” said Aspinall. “Spivac’s got a completely different style to the other guy I was going to fight — he’s pretty grappling heavy, generally, and the other guy generally wasn’t — but you’ve always got to prepare for everything in MMA, so I am prepared for anything.

Related: State Of The Heavyweight Division | Fighters On The Rise

“Ideally I would have fought the same guy, but this is not an ideal world we live in, so you’ve just got to move forward with it.”

So far, each trek into the Octagon has resulted in Aspinall moving forward successfully, dispatching his opponent in a timely fashion and taking another step forward in the shifting heavyweight division. 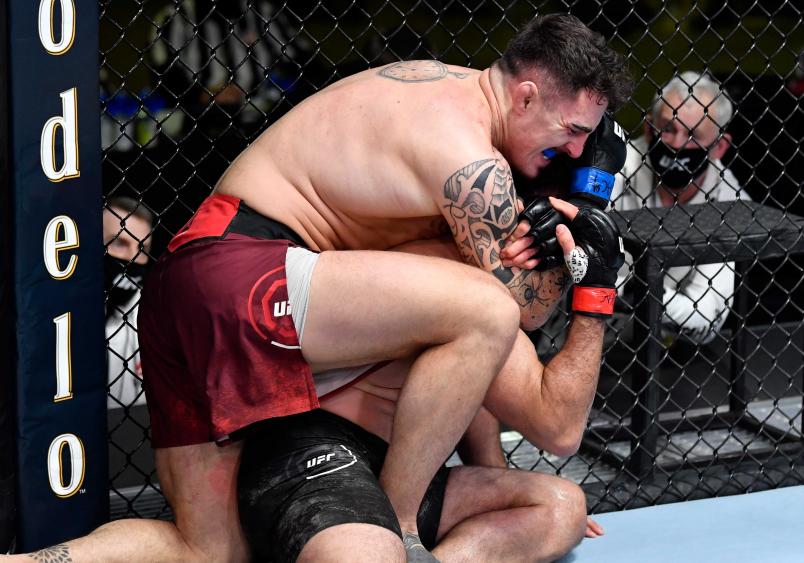 Tom Aspinall of England secures a rear choke submission against Andrei Arlovski of Belarus in a heavyweight bout during the UFC Fight Night event at UFC APEX on February 20, 2021 in Las Vegas, Nevada. (Photo by Chris Unger/Zuffa LLC)

That’s the plan for this weekend as well, and if everything goes according to plan, getting one more in before the year is out would be the emerging contender’s preference.

“(Getting another win) would be great,” he said. “I’m just happy to keep winning, keep having good performances for me and my team, showing that everything we’re doing is working. I know it’s working, but we’ve just got to keep doing it. I would love to get another win, extend my streak a little bit more.

Preview Every Fight On UFC Fight Night: Brunson vs Till

“And I’d like to get one more, definitely, towards the end of the year,” he added. “Hopefully I can get a quick turnaround, but I’ll cross that bridge when I come to it.”

For now, he’s focused on Spivac, and making the walk one more time with his mistress by his side, pushing him to new heights and pulling great performances out of him the same way she has these last three fights.