The Rise Was Quick, But His Stay Won't Be. We Talk To The Heavyweight Phenom.
By E. Spencer Kyte, on Twitter @spencerkyte • Mar. 17, 2022

Tom Aspinall isn’t one to get too wrapped up in the narratives surrounding a fight or spend much time thinking about “what it all means,” because for the surging 28-year-old from Atherton, the only two things that matter are enjoying himself and testing himself.

“All that other stuff, I don’t really think about it too much,” said Aspinall, who headlines the UFC’s return to London this weekend against divisional stalwart Alexander Volkov. “I just think about my own stuff, really, to be honest with you. I’m a selfish man when it comes to this sport, and I think you’ve got to be selfish to be fighting at the top level.”

Throughout the last couple days of media, as the British heavyweight has been asked about everything from competing in front of a raucous crowd at the O2 Arena and taking on a veteran like Volkov to where a win would put him and if he’s ready to hang with the best in the division. But the honest and engaging rising star has been clear that he’s not spent much time thinking about any of those things.

Instead, he’s done his best to remain focused on what he can control and reminding himself to have fun on Saturday night, believing that when he’s enjoying himself inside the Octagon, there’s not a man in the division that can get the better of him.

It’s an approach imparted on him by two crucial figures in his life: his father, British Brazilian jiu jitsu pioneer Andy Aspinall, and Tyson Fury, the reigning WBC heavyweight boxing champion, whom he trained with earlier in his career.

“Both are very influential people in the way that I look at this sport because I feel like you’ve got to enjoy the sport and so many people put so much pressure on themselves,” he said of his father and Fury. “It’s just a fight at the end of the day; if you lose, you lose, and if you win, you win.

“On Sunday, no matter what, I’m still going to have a family at home, people are still going to love me, and everything is going to be okay. It’s not do or die. I’m just going to go in there and enjoy myself and see it for what it is: just a sport.”

It’s an extremely healthy outlook from the emerging heavyweight, who has made a rapid rise through the ranks to arrive at his first main event assignment this weekend.

Aspinall made his promotional debut on UFC Fight Island towards the end of July 2020, defeating Jake Collier in just 45 seconds on a card headlined by his Team Kaobon running mate Darren Till. Less than three months later, he was back in Abu Dhabi, back in the Octagon, and back to making quick work of his opponent, dispatching Alan Baudot in just 95 seconds to push his record to 9-2 overall

He ventured in the second round for the first time in his UFC career early last year in a bout with Andrei Arlovski, submitting the former champion a little over a minute into the middle frame before getting back to finishing things in less than a round in September when he took out Serghei Spivac.

Four fights, four wins, and four finishes elevated him into the Top 15 and landed him across from the Top 10 fixture this weekend.

“It’s probably a little bit faster than I would have liked but, at the same time, without sounding like cocky or anything like that, the difference between me and the top, top guys is the experience,” he said of the pairing with Volkov and the position he finds himself in at the moment. “I don’t have the experience them guys have, so I’m trying to get as much experience as I can before I fight them.

“The problem that I’ve got is that anybody outside of the Top 10 is not going to give me any experience; I can run through them pretty quick,” continued Aspinall, being sure to acknowledge that everyone has a puncher’s chance and how that is especially true in the heavyweight division. “Am I going to wait another couple of fights to face someone like Volkov and have two more wins in less than a round and they’ve still got more experience than me? When is going to be the point that I’m going to do it?

“It could either be now as I’ve got this opportunity in London, in my home country, in front of 20,000 fans, or I can do it somewhere else in the world, and I wanted to do it in London while I have the chance.”

For the thoughtful father of three, a big part of Saturday’s assignment is about figuring out where he stands in the heavyweight ranks and how he’s going to react and respond in a number of new and challenging situations.

“I’m looking forward to finding this out.”

While you can hear the sincerity in his voice when he says that, there is also a little touch of “… but I think I have a good idea” there, as well, which has to be expected given the success he’s had since reaching the UFC and the depth of talent he carries with him into the Octagon.

As much as he’s averaged a little less three minutes of fight team through his first four UFC starts and done the vast majority of his work on the feet, Aspinall is a legitimate Brazilian jiu jitsu black belt, a strong grappler, and just a tremendous athlete overall, even if that hasn’t been on display quite yet.

And although he’d love to keep the other elements of his repertoire under wraps for as long as possible, he’s more than ready to showcase his full complement of skills if that’s what it takes to keep things moving forward. 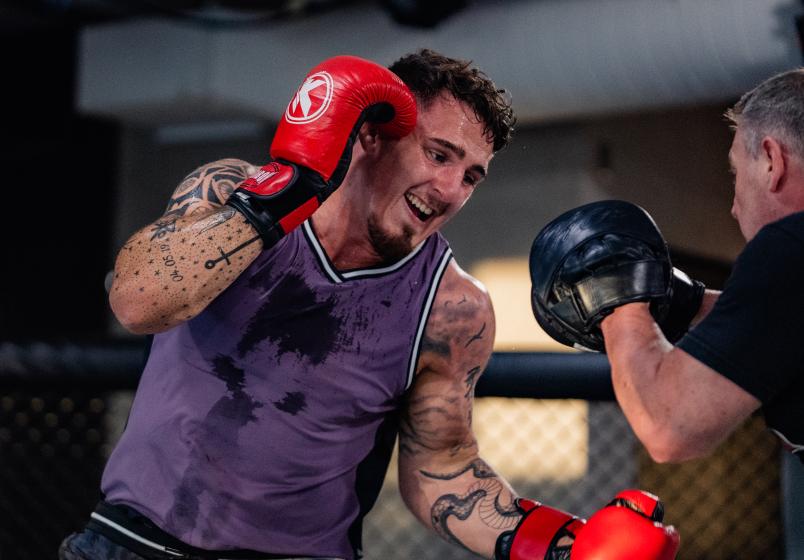 “I’ve been prepared to do that in every fight,” he said when asked about potentially putting more of his skills on display this weekend against Volkov. “If the fight goes beyond two minutes, I’m not going to be like, ‘We can’t fight any more because people are going to see my secrets.’ I just have to take it as it comes and hope for the best. If I can finish him in 30 seconds, I will, but if we have to go five rounds, I’ll do that, as well.

Whether it happens this weekend, next time out, or somewhere down the line, that time will eventually come because Aspinall isn’t going anywhere and he’s likely to be in the title conversation from here on out.