Todd Duffee: Restarting a Career Once Thought to be Over 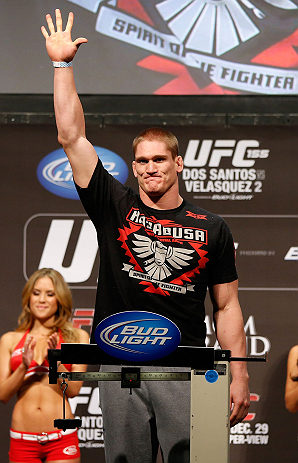 For many athletes, when their career ends is a personal choice. They sit down with their family and survey the landscape, weighing out options and considering factors like age, health and opportunity while struggling to understand that though the competitive fire still burns, it’s not putting out as much heat as it once did.

While some simply wash out, unable to compete at the highest level in their chosen field, for an unfortunate few, the end doesn’t come by choice, but by force, often due to injury or illness.

There was a point not that long ago when Todd Duffee had to accept that he was one of those unlucky souls who wasn’t going to able to fulfill his career ambitions inside the cage.

Two and a half years after his last appearance under the UFC banner, the hulking heavyweight returned, stopping Phil De Fries in a shade over two minutes on the preliminary card at UFC 155, picking up Knockout of the Night honors in the process. On the same night that Cain Velasquez would cement himself as the dominant force in the division by battering Junior Dos Santos for a second time, Duffee rekindled talk about his future potential by once again showcasing the abundant and obvious talent he carries with him into competition.

Yet not long after, he started experiencing severe shoulder and arm pain that prevented him from training. He was eventually diagnosed with Parsonage-Turner Syndrome, a sudden on-set condition caused by inflammation of the brachial plexus, a network of nerves that send impulses to the arms, shoulders and chest.

In that moment, he believed his career as a fighter was over.

“Initially I had to accept that (I was never going to fight again),” Duffee, who returns from his near-two-year hiatus opposite Anthony Hamilton Saturday night at UFC 181, said. “I had to move forward with my life as if that were the case and that was very hard because a part of me didn’t really believe that or want to believe that.

“When it all really came crashing, I remember just sobbing in my apartment in California when I was getting diagnosed. I could not believe that it was going to end like that. I woke up one day and it was over. I went to the doctor thinking, ‘Pinched nerve – not a big deal, not a major issue; we can get this handled.’ Emotionally, it connected a little more flush than I would like it to.”

He lets out a deep, baritone laugh.

With his return to competition just days away, Duffee is able to look back on the last two years with openness and a sense of humor, but it wasn’t long ago that the eloquent, intelligent knockout artist was forced to make some major decisions about how to proceed with his life.

“You have to understand, I went from being a full-time fighter to ‘Now I have to get a job to make money and make ends meet. Oh crap, I left school for this,’” Duffee, who walked away from a scholarship at the University of Georgia to pursue fighting full-time, offers. “Since I was with the UFC, I didn’t think that I needed that anymore because this was my career path, so it’s a slippery slope.

“Not only did I have to worry about the physical portion of it, but then you have to worry about the financial and the lifestyle portion of it where you have to go, ‘Okay, I can’t get trapped into something that I can’t get out of so I can start a training camp if I’m able to do this again.’ I was kind of faced with the question of ‘do I go back to school? Well, if I go back to school, I may not get back to fighting.’

“That’s was the reality I looked at because of my career path and I’m getting old as s**t now.” He lets out another baritone chuckle. “I’m turning 29 the day of my fight, so there’s not a lot of time to play with. There were a lot of times where I was like, ‘This really might be over.’”

Fortunately for Duffee (and fight fans), the pain has subsided and he’s once again poised to step into the Octagon, squaring off with Hamilton, a 34-year-old Team Jackson-Winkeljohn rep coming off a second-round stoppage win over Ruan Potts at UFC 177 in August.

Still a physical specimen and an intriguing addition to the heavyweight ranks, Duffee admits to having matured a great deal during the time away.

A nomad throughout his career, Duffee has made brief stops at several of the biggest gyms in the sport, getting looks with the best coaches and training partners available at places like Xtreme Couture, American Kickboxing Academy and his point of origin, Adam and Rory Singer’s Hardcore Gym in Athens, Georgia.

This time around, he’s set up shop at American Top Team in Coconut Creek, Florida, and as much as the makeup of the training room played a part in his decision, the heavyweight wild card says it had more to do with simple elements of life that he didn’t consider enough earlier in his career.

“I’ve trained at great places, but it comes down to life,” Duffee, who carries an 8-2 mark into action against Hamilton this weekend in Las Vegas, begins. “People think we just get in the cage with our shirts off and beat the bejeezus out of each other. It is that simple at the end of the day, but what it takes to get there at this level is not that simple.

“You need to have good people around you – that’s the most important thing. It’s the people that are around you because at the end of the day, your support system is everything as an athlete. If people aren’t looking out for you, people don’t care about you and they’re along for your joyride, you’re going to get in trouble quick.

He pauses, searching for the simplest way to explain what prompted him to relocate from San Jose to South Florida as he embarks on this next chapter of his career.

Older, wiser and ready to make the most of the opportunity he didn’t think he was going to get, Todd Duffee is primed to return to the Octagon and once again make an impact in the UFC heavyweight division.