Today's JDS knows his best skill: a punch to the face

He laughs when he says it, but he’s dead serious. As Mike Tyson’s first trainer, Cus D’Amato, famously said, “People who are born round don’t die square,” but Dos Santos tried to be an Octagon when it came to his fight game.

A prolific puncher with some of the best boxing in the heavyweight division, Dos Santos parlayed those skills into a 64-second win over Cain Velasquez that earned him the heavyweight title in 2011. But then the whispers started, wondering if his wrestling and jiu-jitsu was as worthy of his championship status as his standup attack was.

Dos Santos listened. Subsequently, he lost the belt, alternating wins and losses from 2012 until he put a stamp on his status as the next in line for another shot at the title with a five-round clinic against Ben Rothwell in April 2016.

“I can say that fight brought me back to reality,” Dos Santos said. “I was getting too worried about what people were saying and thinking about me. I was trying to do more wrestling, more jiu-jitsu and become somebody that I’m not. I’m a boxing guy and I can knock people out. That’s what I do best, so I’m concentrating on that. I want to show my boxing skills because I’m sure that’s more than enough to beat these guys and be number one again.”

He may be right, but only Saturday night will tell the tale. Luckily, he will be in with a fighter he knows very well, having beaten Miocic in a five-round war back in 2014. The two know each other well, and many expect this to not be a new fight, but round six of the last one.

Get ready for UFC 211: Fight card | Reasons to watch | On the rise at UFC 211 | Camp updates: American Top Team, Strong Style | Andrade has become best version of self as strawweight | Watch: Free fight: Dos Santos vs Miocic 1 | Inside the numbers for the main event | UFC 211 extended preview | Do not miss out! Order the PPV now

“I learned a lot about him,” Dos Santos said of Miocic. “I saw how hard he hits and that he’s the real deal for this division. He hits very hard, he’s a very athletic guy and he has good wrestling skills as well. To me, the scenario right now with the heavyweight division is that he’s the guy. That’s why he’s the champion, because he deserves to be the champion. I respect him a lot, he has a great personality too, but on the day of the fight, of course I’m going to come to win and I’m gonna come to put him to sleep. That’s my objective and that’s what I’m gonna do.”

Even when the Brazilian bomber talks about knocking an opponent out, it’s with a joy that belies his profession. Simply put, a chat with Dos Santos is guaranteed to produce a smile, something Miocic found out during their recent media tour, one that featured flex battles, drawing contests and plenty of laughs.

But when it’s time to fight, “Cigano” fights, and this Saturday will be no different. 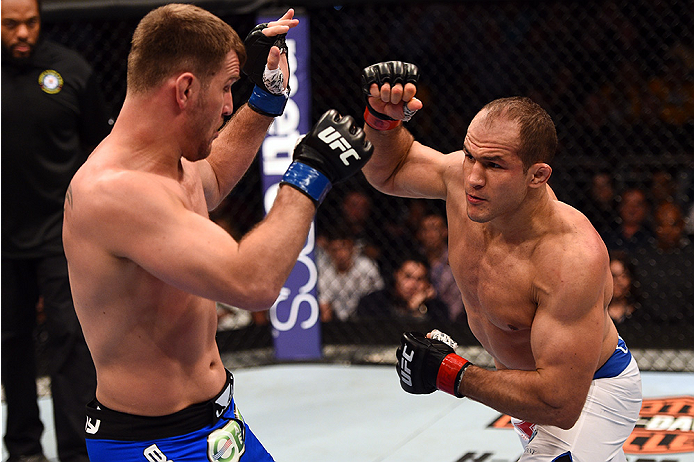 “When I’m in there, I know it’s the most important moment of my life, and I take it like that,” he said. “It’s so important to my life and to the life of my family, so it’s easy for me to become that kind of Junior. I’m focused and I pay attention to everything during the fight and I’m ready to win. So it’s not that hard.”

If a fight fan is making a pick on this weekend’s main event based on personality and likability, a draw might be the right call. But for the two gentlemen who will put that aside for 25 minutes or less in Dallas, winning is the only outcome worth discussing. That’s especially true for Dos Santos, who has taken his lumps in the Octagon and in the court of public opinion on the way to this moment. He hasn’t had an easy road, both pre-title and post-title, with a friend of his once telling me, “They didn’t feed him dead cattle, they gave him bulls.”

That’s an accurate statement. Since his UFC debut in 2008, few, if any, have fought his level of competition in the heavyweight division, and despite his ever-present smile, not having the belt that represents being the best in the world stung him.

“In the bottom of my heart, I knew I had everything it takes to be number one in the world and I wasn’t, so that was the most frustrating thing for me,” he said. “I wasn’t putting in the right work to do that.”

Then he listened again. To himself. Now he’s one win away from wearing that championship belt once more. That’s worth smiling about.