You never know what a Fight Night could mean to the future of the UFC. Today we look back at a pivotal night for Rashad Evans
By Thomas Gerbasi • Jan. 25, 2019

Not every fight card goes down in the history books for its impact on the UFC. But every fight card is important, because you never know how something happening on a random night can affect what happens in the Octagon down the road.

That brings us to UFC Fight Night at the Seminole Hard Rock Hotel and Casino in Hollywood, Florida on January 25, 2007.

Despite all this star power, most of the attention leading up to the bout was focused on the UFC debut of former PRIDE star Heath Herring. A Texas native who had battled the likes of Minotauro Nogueira, Fedor Emelianenko, Vitor Belfort, Mark Kerr, Igor Vovchanchyn and Mirko Cro Cop in Japan, Herring was expected to make an immediate impact in the heavyweight division, and 9-0 Jake O’Brien was only going to be a speed bump on the road to the top for “The Texas Crazy Horse.” 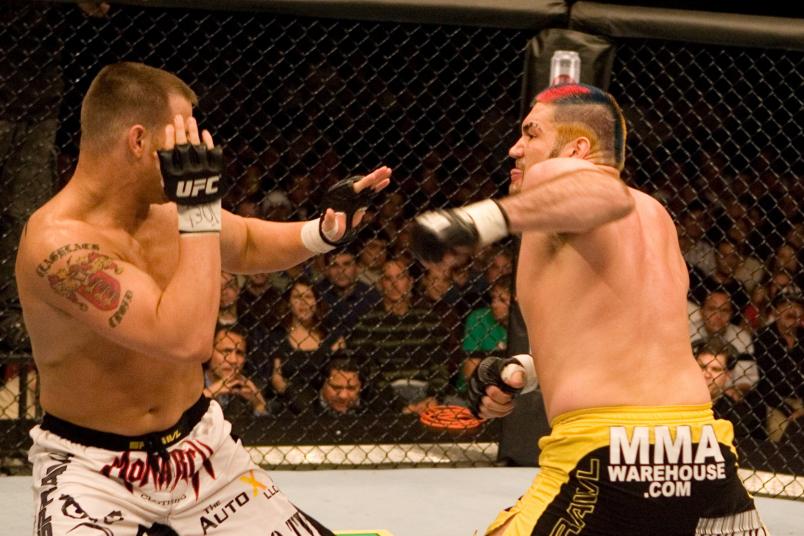 As Herring told me before the fight, “My take is that I’m the hired gun.  I’m coming in here to mix things up a bit.  People may think the heavyweight division’s weak right now, but I think that’s a very short-sighted viewpoint.  There are a lot of people coming in – I may just be in the first wave, which is fine with me.  I’m used to fighting with the big boys overseas, so it’s not gonna be anything new for me.”

But it never happened for Herring in the UFC. He was upset by O’Brien, showing that one fight can drastically alter a fighter’s future, either positively or negatively. In Herring’s case, it was a negative development, even though he did get three more fights in the Octagon, beating Cheick Kongo while losing bouts to Nogueira and Brock Lesnar.

For the headliner Evans, though, the fight against Salmon may have changed fans’ perception of the former Michigan State University wrestler forever. Heading into his fifth UFC bout, Evans was 4-0, but he had developed a reputation as a talented fighter who just wasn’t a closer, despite his knockout of Jason Lambert four months earlier. His first three bouts resulted in two split decision wins and one majority decision victory, not exactly what screamed out championship potential.

But with one kick to the head that is still shown on UFC highlight reels, Evans kicked off the run that saw him stay in the headlining role for much of the next 11 years and that garnered him a UFC light heavyweight title less than two years later.

Remember, all it takes is one fight.

Here’s how we saw it that night…

With a perfectly timed kick to the head of Sean Salmon at the Seminole Hard Rock Live Arena, light heavyweight contender Rashad Evans may have permanently erased the notion that he is not a finisher, as he knocked out the former Ohio State wrestler in the second round to remain unbeaten and earn his second straight devastating knockout victory.

The end of the UFC Fight Night main event came at the 1:06 mark of round two.

The two former Division I wrestlers traded punches in the early going, with Evans holding the edge thanks to his faster hands.  Two minutes in, Salmon was able to get Evans to the mat and he worked quickly to get into side control.  Evans fought his way back up, only to get tagged by a left-right by Salmon, and a few seconds later, the Ohio resident got another takedown.

Early in the second, Evans got back in gear, hurting Salmon briefly with strikes to the head and a follow-up flurry.  Smelling blood, Evans moved in carefully and threw a perfect right kick to the head.  Salmon was out before he hit the mat. 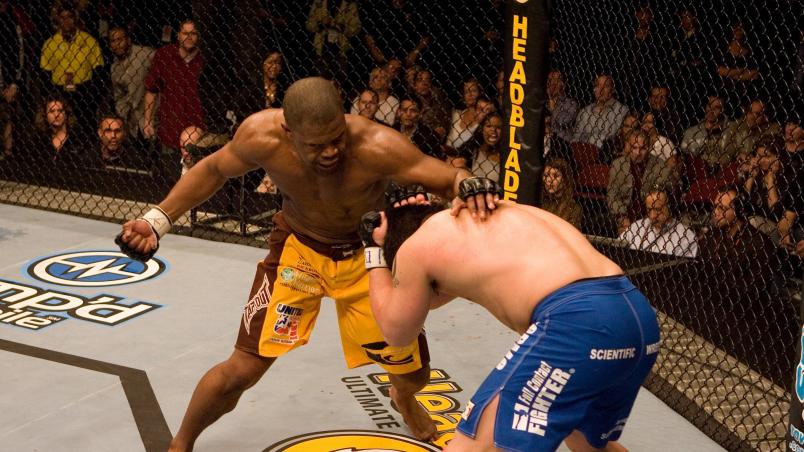 International star Heath Herring got a rude welcome home in his UFC debut, as unbeaten 22-year old Jake O’Brien stifled the offense of “The Texas Crazy Horse” for 15 minutes and took him down almost at will en route to a unanimous decision victory.

“I’m disappointed,” said Herring, 28, who had previously fought in Japan for the PRIDE and K-1 organizations. “In my head, this fight wasn’t supposed to go this way.”

Hermes Franca moved one step closer to a shot at UFC 155-pound champion Sean Sherk in the main card opener as he impressively halted Spencer Fisher in the second round of an exciting lightweight bout.

Fisher pushed the pace in the standup early as the purple-haired Franca took his time getting acclimated to the Octagon.  A minute and a half in, Franca got the takedown and almost landed a submission on Fisher, but ‘The King’ sprawled his way out of trouble and went back on the attack with punches and kicks.  Franca was no slouch standing though, as he landed a couple of looping overhand rights on his opponent and then got another takedown with 1:30 left in the round.  Franca then finished strong with strikes on the mat.

The fast pace continued in the second, with Fisher tightening up his striking and landing with more accuracy.  An ill-advised kick on the grounded Franca almost got Fisher in trouble  submission-wise, but he was able to escape, only to be put in a precarious position on the mat moments later as Franca worked an effective ground and pound on the Iowa resident.  With 2:30 to go, referee Jorge Alonso stood the two fighters up and Fisher went back to sprawling the Brazilian around the Octagon.  When Franca did stop, the two traded blows to the delight of the crowd, and with a little over a minute left, Franca stunned Fisher with a wide right hand. He followed with a knee and then poured it on his hurt opponent until Alonso had seen enough and wisely waved it off at the 4:03 mark.

Nate Marquardt made a strong case for a shot at UFC middleweight champion Anderson Silva with a shutout three round decision win over Dean Lister.

Welterweight up and comer Josh Burkman returned from an injury-induced six-month layoff with a three round unanimous decision over Octagon debutant Chad Reiner.

The Ultimate Fighter 3 finalist Ed Herman broke a two-fight losing streak by making short work of Chris Price, submitting ‘The Exorcist’ in the first round of a scheduled three round middleweight contest.

Din Thomas’ striking game and late takedown defense proved to be the difference in a hard-fought three round war with game Clay Guida as he pounded out a close unanimous decision victory in their lightweight bout.

In the welterweight opener, Slidell, Louisiana’s Rich Clementi showed a veteran’s poise before taking Ross Pointon down and out at 4:53 of the second round via submission.