TJ Waldburger - Movin' On Up

"I'm training harder and training more. I put my work and my effort into this and it's not easy, but I'm here now and I'm going to keep doing it until I'm told otherwise.” - Jordan Newmark 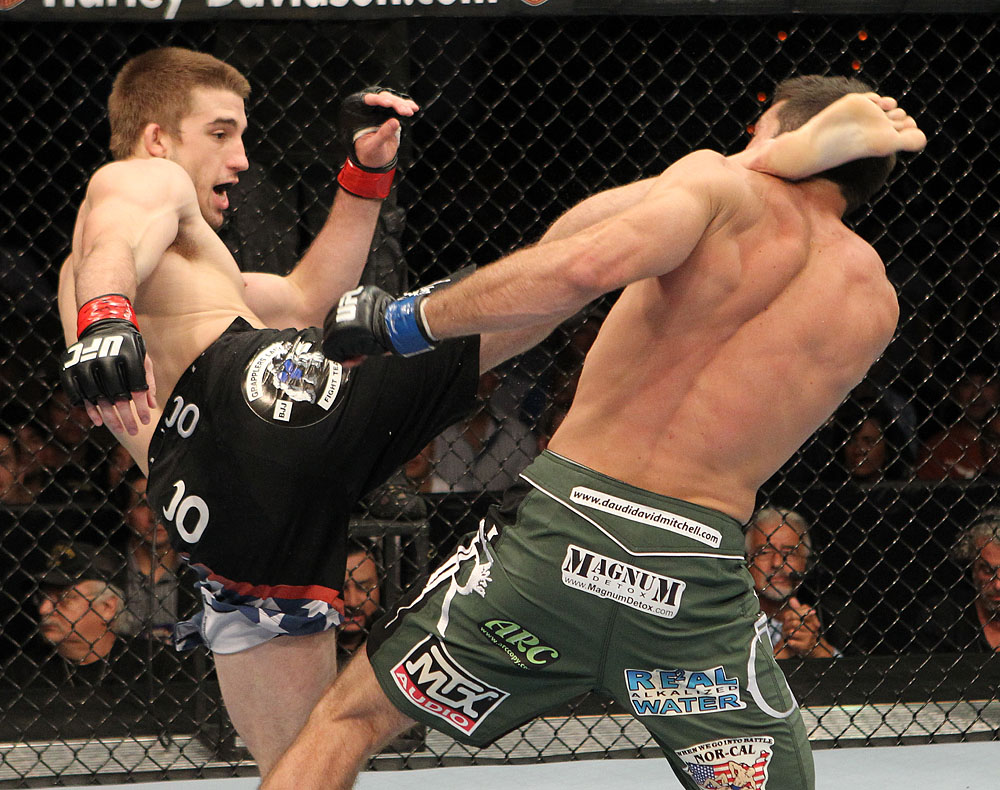 “I've missed more than 9000 shots in my career. I've lost almost 300 games. 26 times, I've been trusted to take the game winning shot and missed. I've failed over and over and over again in my life. And that is why I succeed.” - Michael Jordan

He lost. He got dropped. On March 26th, at UFC Fight Night in Seattle, Washington, TJ Waldburger lost to Johny Hendricks in the first round by TKO. Waldburger knows it and he knows what he did that led him to a loss in his second fight in the UFC.

“I threw the sloppiest left round kick in the world,” remembers Waldburger. “I left my hand down and I didn't snap it back and come back to my stance. Just a horrible left round kick. He countered with a punch and came back with another one and then the ref called it.”

The question is, so what? It’s too bad he lost and all, but it’s not like Waldburger’s going to quit because of one loss. Waldburger is only 23 years old and he is a cage-fighter competing against the best competition. He started fighting MMA professionally when he was still in high school, so technically Waldburger’s an old vet with 19 fights under his belt. Losses happen, you learn from them and you move on.

“Overall a fight's a fight,” states Waldburger. “You go in there and fight. I made an amateur mistake and he capitalized on it. I have no excuses for that. I'm going to work on those little details and fix them, but what's done is done.”

After the loss, Waldburger did what every fighter should do and that’s get back in the gym, get better and get himself ready to fight in the Octagon again. “It’s about tuning up the finer details,” explains Waldburger. “We're at such a high level that you can't make simple mistakes. Guys who fight at this higher level will capitalize on them. I'm not trying to change my game, but just tighten up the holes.”

At UFC Fight Night in New Orleans a week from today, Waldburger gets his chance to improve his 13-6 record by facing the 12-3 Daniel Roberts, who is coming off back-to-back losses of his own. “If he's anything like me, then your losses are only going to motivate you to get better and to figure out what you need to work on,” says Waldburger, who is eagerly preparing for the best Roberts has to offer. “Hopefully he does that, but you never know. He might come out a totally different person than what we've seen last, so I'm just trying to be ready for anything.”

Stylistically, it is obvious why Roberts and Waldburger were paired to fight each other: submissions. “After looking at his background, I saw that he was a good grappler and most of his wins come by submission,” remarks Waldburger of Roberts having 9 of his 12 wins come by submission; meanwhile, 10 of Waldburger’s 13 wins are by submission. “Ground versus ground really comes down to who has the better timing and who is going to react better to the situation, flowing rather than forcing things. I think in jiu-jitsu what is going to win is reacting and adapting.”

A trademark of Roberts’ fights that the Texan is dutifully aware of is that he starts out fast. “I think I'd be ready to go at a fast pace for all three rounds and at the same time I'm ready to slow him down and play my game too,” explains Waldburger, who will look to counter Roberts’ usual early frenzy to pull “Ninja” into his own pace. “It's really about weathering the storm and slowing him down. If he comes out fast then he's going to wear out fast. It's really about being the more experienced pro fighter than going in there and getting into it in a hurry and being more amateur.”

Both fighters seemingly prefer the ground, but this is MMA, and Waldburger is training to finish fights on the feet too. “That's the main thing in the fight - whatever it takes to win the fight,” asserts Waldburger, who trains at Azteca boxing as well as his main gym, The Grapplers Lair, which he has trained at his entire career. “Looking at him on tape it looks like I'll do good within the standup, but you never know until you get in there with him. We'll play with it and see where the fight has to go. I'm confident in my standup game, but I'm not a standup guy or I'm not a jiu-jitsu guy - I'm a fighter.”

In his UFC debut win over David Mitchell at UFC Fight Night last September, Waldburger showcased much of his vaunted grappling as well as solid takedowns. “It seems like every time the fight goes to the ground I feel more comfortable there and I'm winning that way,” says Waldburger, a rank of purple belt in BJJ under John Moore of The Grapplers Lair. “With Mitchell, I kind of wanted to stand with him, but I was feeling more comfortable on the ground and I was doing better on the ground with him than I was standing. So that's where I was continuing to take it. I'm just going to react and adapt with Roberts to find out where I need to go to win.”

Training for his third fight in the Octagon, Waldburger is sticking with the people who have been with him every step of the way to shape him as fighter: Moore and The Grapplers Lair. “I wouldn't be anywhere without Grappler's Lair or John and I wouldn't want to be anywhere else,” says Waldburger of Moore, who is not only his coach/mentor, but also Waldburger’s father-in-law and a soon to be grandfather as Waldburger and Moore’s daughter, Shayla, are expecting their first child in November. “John is an amazing coach. He has a really good understanding of what it takes to win the fight and to perform. He doesn't set himself to one thing and is open to any martial art and that's what mixed martial arts truly is.”

On September 17th, live on SpikeTV, in New Orleans, Louisiana, Waldburger will clash with Roberts in what should be a grappling fan’s dream matchup. “I feel more motivated training because I'm at the top fighting for the UFC, and once you get to this top you're starting at the bottom again, so you can work your to the top here,” affirms Waldburger, a young man who has the wisdom and humility to learn from his mistakes and the youth and talent to right them. “I'm definitely seeing little stuff I know I could do better at and I feel like I'm at the level now that I can compete with the top guys and that's why the UFC hired me. I'm training harder and training more. I put my work and my effort into this and it's not easy, but I'm here now and I'm going to keep doing it until I'm told otherwise.”