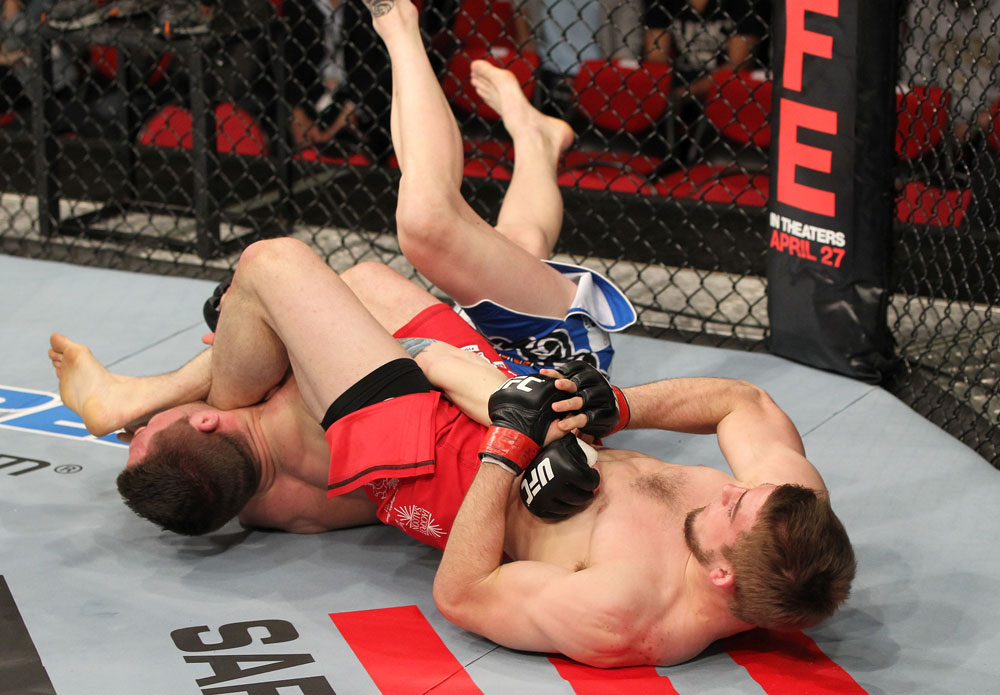 If it feels a little bit like Belton, Texas for TJ Waldburger in Atlantic City, New Jersey this Friday night, it’s not the late summer-esque heat attacking the east coast (though that helps). No, it’s just a sign that the rising welterweight star has found his groove, is one hundred percent on point, and ready for anything veteran Brian Ebersole throws at him in their UFC on FX bout.

“I think once you get to a certain amount of experience, where the Octagon feels just like the gym that you train at, then it really doesn’t get any better than that,” Waldburger explains. “Once you get that comfort level, it’s not much different.”

Easy for him to say. In a stacked division where even the prospects can give the veteran contenders a run for their money on any given night, Waldburger shook off a first round knockout loss to Johnny Hendricks in March of 2011 to win two in a row, both by submission, over Mike Stumpf and Jake Hecht. The wins pushed his record to 3-1 in the UFC and 15-6 overall, and there’s a distinct sense that he’s turned a corner in his promising career.

“I’ve felt better and better in every fight, but in my last few fights, I noticed a huge change in not only my mental game coming into the cage, but when I was fighting, it really was just like the dojo,” he said. “It’s like there really isn’t anybody around; there’s nothing but me and that other guy. And I think I’ve opened some eyes. I’m getting more comfortable in the Octagon and I’m feeling like myself and I feel like I’ve got a lot more to show. It’s a gradual process.”

And one he appears to have a handle on thanks to a stellar ground game that has earned him finishes in 12 of his 15 wins. But the newly minted jiu-jitsu brown belt isn’t your typical mat wizard. He’s far from methodical when his fights hit the ground, and he is always looking for a finish and not just any finish, but one that will have fans oohing and aahing when he’s done. In fact, if he keeps on his current upward trajectory through the 170-pound weight class, he may become a fighter that makes casual fans appreciate tap outs as much as knockouts.

“That’s something I would love for people to see, and they’re going to see so much more that I’m going to show,” said Waldburger. “That’s just the way I am. I want to excite the crowd and I want to finish the fight. I don’t want to just win; I want to finish, I want to get it done, and that’s what I do. So not only am I trying to finish the fight, but I’m trying to do it in a spectacular fashion so people do see that MMA style of jiu-jitsu and get that passion back. I feel like everybody gets excited about the knockout and they’ve kind of lost track of how the UFC started, with jiu-jitsu, and I want to bring that back.”

After that comment, he jokes “but, I’ll take the knockout too,” and against 65 fight veteran Ebersole, he will need to be prepared to go everywhere if he wants to nail down the biggest win of his nearly seven year career.

Ebersole has been around and seen it all, despite being only 31 years old, and with an unbeaten 3-0 record in the UFC and a current 10 fight winning streak, he is rightfully seen as Friday’s favorite. Don’t tell that to him though, as he said of Waldburger in his UFC bio, “He's got all the advantages. Younger, smarter, better looking, more athletic, and he even has more UFC experience than I do.” That’s high praise, and something Waldburger appreciates, even though he won’t let it affect him when the Octagon door closes.

“I’m honored for him to say that,” said the 24-year old. “That guy’s been around a lot longer than I have, and he’s great at every part of the game and has really put his time in. So it’s gonna be an honor to fight him and it’s definitely gonna be a big step for me in the UFC. I respect him, but once we’re in the cage, it’s business and it’s time to throw down.”

And isn’t that the way they do it in Texas on Friday nights?