"I know what’s at stake here, so I’m getting ready like it’s my last fight and I’ve gotta win.” - TJ Grant 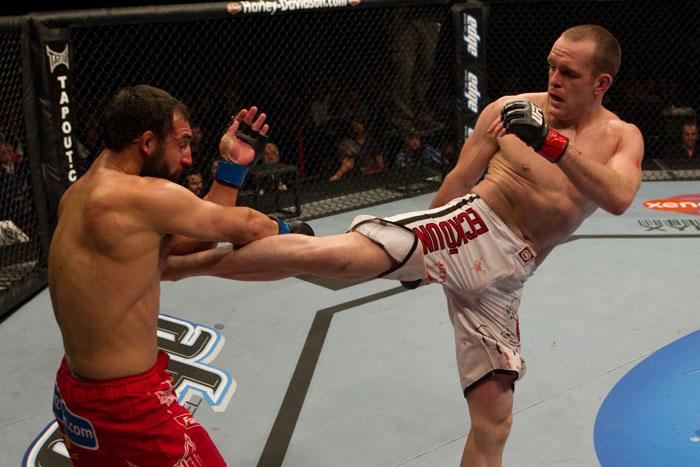 To make it to the UFC is hard enough. To stay requires a Spartan work ethic, tremendous skill, and a little luck as well. Welterweight TJ Grant has earned his keep in the Octagon, with six fights in the organization and a seventh against Charlie Brenneman coming up on June 26th in Pittsburgh.

But at 3-3, Grant now seeks the consistency to move from prospect to contender, and he feels that he’s reached the point where everything is starting to come together.

“I feel a lot more mature as a fighter and I’m starting to see what’s going on in the fight,” he said. “Now I’m really able to understand how the fight’s going a lot better in terms of competing and the other little battles, rather than just going out and trying to take the guy’s head off. There are a lot of little battles that go on in the fight that maybe people don’t see, and I’m starting to feel more comfortable in there every single time.”

That’s not to say that he’s got it all figured out, as a win over Julio Paulino last September was followed by a disappointing defeat at the hands of Ricardo Almeida that was a little reminder that there was still work to be done.

“I got taken down early in that fight, I didn’t listen, and the first strike I threw was a leg kick and that was one thing we said,” he recalls. “‘Don’t throw many leg kicks and definitely don’t open up an exchange with a leg kick,’ and that was the first strike I threw in the fight. I started off bad and Almeida’s a great fighter, and I don’t want to take anything away from him. He worked his game, he got me down, and he never let up the pressure. After that fight I kinda realized that I’ve got to be more patient and I also have to improve my wrestling and my conditioning.”

And while he’s attacked the wrestling and conditioning aspects of his training with a renewed vigor in order to tighten up his game, his patience has been tested by the six months he’s been waiting to get back into the Octagon. But after being in the game for more than five years, he knows that not everything will go the way you always want it to, so he’s made good use of his time on the sidelines.

“I’ve had a long time between my last fight and this one, and I’ve really changed up my training,” he said. “Everybody says they’ve had the best training camp every time, but this time I truly believe that I’m by far the best version of myself that I’ve ever seen. I really look forward to getting out there and showing what I’ve been doing and how I’ve been preparing.”

Most importantly, Grant (16-5) wants to erase the memory of the loss to Almeida and begin what he hopes will be his first UFC winning streak. If he’s able to do that, he’ll be able to avoid the inevitable question that plagues any fighter who has lost in the UFC: “is this a must win?”

“I see every fight as a must win in this game,” he said. “This is really huge in my career, and I gotta win. Charlie’s a tough opponent and I’m coming off a loss, and I haven’t really talked about it, but I know what’s at stake here, so I’m getting ready like it’s my last fight and I’ve gotta win.”

Grant, 27, takes such queries with grace, not getting annoyed at what must be the 800th time he’s answered the question. But as they say, inquiring minds want to know…

“It’s just something you’ve got to deal with,” he said. “I don’t let it get to me too much because in the end, that’s what I signed up for and that’s what comes with being a professional fighter. There are highs and lows, you’re only as good as your last fight, but that’s the way it is. Guys are quick to write you off, so you have to have good people around you, keep plugging away every day, and just don’t let it get to you.”

He hasn’t. In fact, you could say that the Cole Harbour, Nova Scotia product is living out a dream fighting in the UFC. So though he’s had to weather some storms, he’s still smiling while also realizing that now is the time to make his move if his championship aspirations are to come to fruition.

“I’m enjoying it,” said Grant of life in the UFC. “I love going to fights and I love being a fighter and all that comes along with it. I was able to buy a house in the last year because I’m in the UFC, and I love the opportunity I’m getting. At the same time, I don’t feel like I’m any further in my career than what I was when I started. I really want to get out there and rack up wins and I want to make a statement.”

Even if that statement requires him going into Pennsylvania, the home state of Hollidaysburg’s Brenneman.

“I’ve been the bad guy before,” he said. “It’s not so bad. (Laughs) I’ve been the good guy too. I’ve had a lot of opportunities to fight in Canada, I fought in my hometown, and I’ve been lucky in that department. A lot of guys, like the Ontario fighters for instance, they fight their whole careers on the road. So I’ve been pretty fortunate, and now it’s my turn. I’ve got to take my licks too, but I’m ready to go out there and put on a show for the Pennsylvania fans.”

It might be his last one too when it comes to competing at 170 pounds, as Grant’s extended time off has his body weight down and his mind thinking about a test run at lightweight.

“It’s almost been a blessing in disguise not fighting for this long,” he said. “With all the training, my body weight has gone down, and I feel like I’m at a weight right now where it won’t be the most comfortable cut in the world, but I can make 155 and I feel like it’s something I want to do. But I still feel great at 170. I’ve never really gotten outclassed at 170, but at the same time I want to fight guys that are more my size too.”

The idea of moving does contain a Devil’s bargain though because if he wins and wins impressively against Brenneman, the temptation will be to stay at 170. But that’s a bridge he’ll cross after June 26th. For now, the focus is strictly on winning the little battles and the big war against “The Spaniard” in Pittsburgh, so when you ask him his outlook for the rest of the year, he keeps it short and sweet.