"It’s going to be a battle. We’re going to test each other’s wills, and he’s shown a lot of great things in his last couple fights, so I have to be ready." - TJ Grant 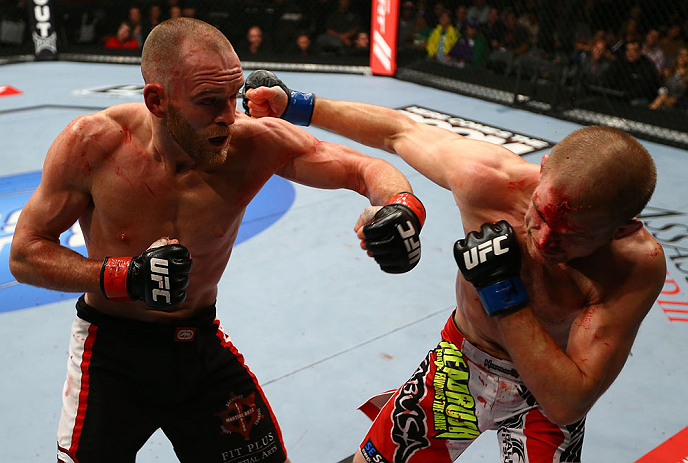 The town of 25,000 people sits along the Atlantic Ocean, not far from Dartmouth, and became a well-known locale thanks to the success of its most famous former resident, Pittsburgh Penguins captain and former league MVP, Sidney Crosby. Serious puck enthusiasts will tell you Cole Harbour is also home to Nathan MacKinnon, the 17-year-old center of the Quebec Major Junior League’s Halifax Mooseheads who could be the first overall selection in this summer’s NHL entry draft.

TJ Grant is quietly starting to put his hometown on the map with fight fans as well.

Without much fanfare, the 28-year-old has strung together three straight wins to climb into contention in the ultra-competitive UFC lightweight division. After splitting his first six fights inside the Octagon evenly between wins and losses as a welterweight, Grant relocated to the 155-pound ranks, and in the 15 months since he debuted in his new weight class, the well-rounded Canadian with the well-maintained beard has been impressive.

“You always look back and wonder ‘What if?’ but I made the decisions I did, I can’t go back, and I’m just happy to be where I’m at right now,” explained Grant earlier this month when asked about the timing of his move down a division. “I’m happy that the UFC gave me opportunities. After my loss to (Ricardo) Almeida (at UFC 124), I was happy to still be in the UFC.

“I knew at 155 I could do a lot better. I felt like while I competed in all my fights, I wasn’t big enough, and that was ultimately what I feel was my downfall. At this point in my career, I’m happy to be where I’m at, and 155 is my home.”

Just as he’s proven himself to be perfectly comfortable in his new weight class, Grant is also perfectly comfortable continuing to train at home in Cole Harbour. While countless other up-and-coming talents from smaller communities and smaller gyms have opted to pack their things and seek out bigger facilities and bigger names to help take their careers to the next level, Grant has bucked the trend, and doesn’t see any reason why he’d ever need to file a change of address notice in the future.

“I do all my training here for the most part,” said Grant, who has called FIT Plus Martial Arts his home base since the doors opened. “The head coach and trainer is Scott MacLean; he’s the owner, and he’s one of my best friends. We’ve been doing this a long time. He started the gym back in 2004, and I was the first member. I kind of started from the ground level, and I have so many great training partners who are close friends that push me. It’s a good group of guys here.

“I do travel and do some training aboard, and we do always seek out bringing in talent and training partners, especially during training camps, just to give you that extra little push. At the same time, because we’re on the East Coast, it’s quiet over here. There just isn’t the same exposure for MMA here as there is in Ontario or Quebec or farther west, but it’s coming along.

“There are a number of talented fighters here, and it’s just about opportunity. I’ve got good training partners, good coaches, and a world-class facility. I’ve been training and doing my thing here, and it’s been working out for me, so if it ain’t broke, don’t fix it.”

Grant has been the exact opposite of broken as of late, most recently showing off his complete skill set, grit, and mettle in a Fight of the Night-winning victory over Evan Dunham at UFC 152 in Toronto.

Many expected the lightweight duo to find their way to the main card of the event, but when Jon Jones and Vitor Belfort were shifted to the card following the collapse of UFC 151, Dunham and Grant were shuffled back to the preliminary portion of the card.

“We got bumped off the main card a few weeks before, and we went out there with something to prove,” admitted Grant. When the final horn sounded, they had proven their point.

The two spent 15 minutes trading punches and kicks, Grant getting the better of the exchanges, Dunham grinning as blood ran down his face, and the crowd at the Air Canada Centre loving every minute of it.

“I remember him biting down a couple times after I had socked him pretty good a couple times, and him shaking the blood off his face,” laughed Grant, explaining when he knew he was in for a long, drawn out fight with Dunham. “I knew probably a couple minutes into the first round that this wasn’t going to let up – we were just going to do this, and put on a good fight. We had a battle, and it was an awesome fight.”

The victory moved the laid back Nova Scotia native one step closer to title contention, and earned him a matchup with veteran Matt Wiman as part of the UFC on FOX 6 card in Chicago this weekend.

Like Grant, the Ultimate Fighter Season 5 alum Wiman has been making slow and steady progress up the lightweight ladder, collecting victories in five of his last six appearances, the lone setback a questionable unanimous decision loss to Dennis Siver at UFC 132 last July. Fresh off a first-round submission win over previously unbeaten British submission specialist Paul Sass – in Nottingham, England no less – Wiman has never looked better, and that’s part of what has Grant counting down the days until the two step into the cage together in Second City, USA.

“Matt’s a great opponent. When the UFC said I’d be fighting Matt Wiman, I was pretty excited to get the opportunity to fight him. He’s a great dude, but he’s also just an awesome fighter who likes to come and put it all on the line. I feel like that’s the fight I wanted to have, and having fights like that is what I want to do – go out there with somebody where we’re going to meet each other in the center, and we’re going to go to battle.

“I’m excited for it. He’s a lot like my last opponent, Evan Dunham,” continued Grant, who sports a 19-5 record overall. “(Matt has) a little bit different body type, but he’s really good at jiu-jitsu, he’s got good, solid striking; good, solid wrestling; and he likes to mix it up. It’s going to be a battle. We’re going to test each other’s wills, and he’s shown a lot of great things in his last couple fights, so I have to be ready.

“I think we’re both going to go out there and mix it up. I can tell you that the fight is going to take place on the ground, there are going to be scrambles, and that it’s going to be a battle. I’m sure we’re not going to be shying away from standing up and banging it out either, so I’m totally thrilled.”

With a new championship contender seemingly popping up every other month in the lightweight division – and Strikeforce champion Gilbert Melendez cutting to the head of the line in April – getting notice and staking your claim to a place in the title picture is a difficult task.

While making your case for contention on the microphone has been de rigueur over the last year and change, don’t expect Grant to start cutting promos and calling out his fellow competitors.

“I’m not one of the guys that are going to go up there and talk a lot of trash; it’s just not my style. You’ve just got to keep putting win after win together, and eventually that will make enough noise for itself. I love this sport, and really, I love to get out there and fight. I would still be training if I weren’t getting paid to fight in the UFC. I never make it personal. This is something that I’m lucky to do and enjoy doing.

“Everybody in this sport – there are no hard feelings,” added Grant in closing. “You can hate them for 15 minutes, beat the s*** out of them, hate them your whole training camp while you’re preparing, but it’s just business, man. We go out there and fight; that’s what we do.

“Afterwards, I could care less.”

Sometimes it’s the quietest one of the bunch who is the most dangerous.