TJ Grant and the Value of a Short Memory

"I don’t like to dwell too much on what I’ve done in the past, win or
lose. I always look forward to the next challenge and I still don’t feel
like I have this thing figured out." - TJ Grant 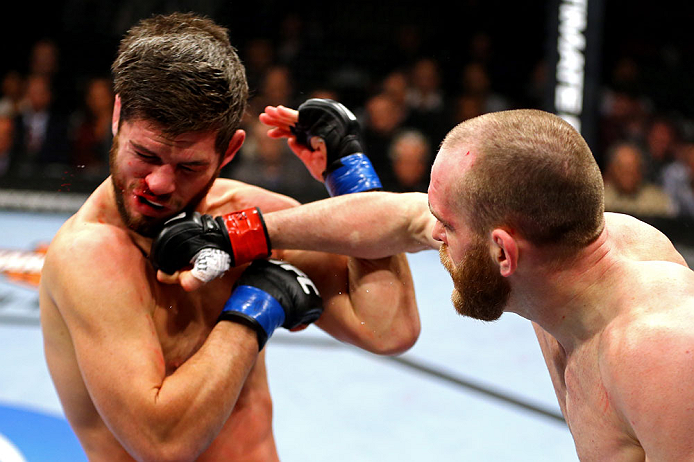 It would be easy for TJ Grant to start getting off track a bit and start believing his press clippings. Who could blame him? Since moving to the lightweight division in 2011, he’s won four straight fights, picked up a Fight of the Night bonus, and after finally getting the recognition he’s deserved from the MMA world, he’ll be one win away from a world title shot when he faces Gray Maynard this Saturday at UFC 160.

But outside of a few brief smiles to himself about where he’s been and where he’s at, Grant’s only concern is where he’s going.

“I win, I’m happy about it, I enjoy it for a couple days then I move on,” he said. “It’s nice sometimes to look back and just see what you’ve accomplished and who you fought. A lot of the guys I fought recently I looked up to earlier in my career, and now to see that I’m right there is a testament to my hard work. But I don’t like to dwell too much on what I’ve done in the past, win or lose. I always look forward to the next challenge and I still don’t feel like I have this thing figured out. Any martial artist that says they do, they don’t really need to be training anymore. But me personally, I’m always trying to learn, always trying to get better, and I stay humble.”

‘Humble’ would probably be the best word to describe 29-year-old from Cole Harbour, Nova Scotia. He doesn’t make a lot of noise, he doesn’t call people out or engage in any heated trash talk; he just goes out and does his job, and in the process he does it better than most. That should be enough to make you a superstar, but as the saying goes, the squeaky wheel gets oiled, and Grant is anything but squeaky when it comes to his interactions with the media or the fans. Subsequently, it’s taken him a little longer to get to this position than some, but he’s not about to change who he is.

“That’s been my outlook from the beginning,” he said. “I’m not gonna force anything or be anybody I’m not. I’ve always just tried to stay true to who I am and how I like to do things and how I like to conduct myself. I’ve got nothing wrong with anybody doing it whatever way they want, but I’m happy the UFC recognizes that I’ve been doing my job well, and I’m just looking forward to going out there and doing the best I can and hopefully earning the title shot.”

That’s the tough part, especially against two-time title challenger Gray Maynard, who was thisclose to dethroning then-lightweight boss Frankie Edgar in their two epic battles. Now with a win over Clay Guida under his belt last June, Maynard is back and hungrier than ever to get a third crack at the belt now held by Benson Henderson.

“You know what he brings to the table, but you can do all the game planning you want for it and he still does it at an extremely high level,” said Grant of Maynard. “He’s really good at what he does and I’m sure he’s been adding things to his game. And though he doesn’t have a lot of fights, basically all of his fights are in the UFC, so he’s a very experienced guy. I’m excited for the challenge. I think I possess different tools than a lot of his opponents have, so I’m looking forward to getting out there and I’m gonna fight my fight. Whatever it takes, my goal in the end is to get my hand raised.”

That approach has been the beauty of Grant’s rise up the lightweight ranks. He’s not one-dimensional, he’s not married to a particular game plan on fight night, and while some fighters say they will do anything and go anywhere to win, he’s actually proved it. Whether he was submitting Shane Roller, keeping to a disciplined attack against Carlos Prater, going through a three round war with Evan Dunham, or knocking out Matt Wiman, Grant has shown that he can do it all, and if 15 minutes locked in the Octagon with Maynard scares some, it doesn’t faze Grant.

“I approach every fight with the worst case scenario that I’ve got to go out there and there will be no breaks; that I’m gonna be fighting my ass off for 15 minutes, taking lumps,” he said. “But my goal is always to win and to be in the moment. Don’t dwell on what happened a minute ago or what’s gonna happen in a minute. Just try to win every second that I’m there, and with a guy like Gray, I know it’s gonna be tough, it’s gonna be grueling, but if I just do what I’ve trained to do and stay strong in there, I feel like it’s my fight to win.”

That’s not just a testament to Grant’s skill and determination, but to the coaching he’s received from Scott MacLean and the rest of the squad at Fitplus MMA in Cole Harbour. And in another welcome twist in a sport that sees plenty of gym hopping, Grant has stayed loyal to his team through thick and thin.

“I feel like there’s a good level of trust among my team and my coaches and that’s really big in this sport,” he said. “They know me as well as anyone, and when things go wrong you’ve got to be realistic about what it was that went wrong, whether you didn’t prepare properly or you just had a bad fight or you fought somebody better than you. But you always go back to the drawing board trying to get better. I never really jumped to any conclusions. I don’t think there are any quick fixes in this game or in life. You’ve got to put in the work day after day, and consistency is what it is. I’m not gonna speak for anyone, but me personally, I like what we do here and I feel great. This is my home, I live two minutes from the gym, I’m ultra comfortable, and I get great preparation here, so why change it?”

Why indeed, and being close to home while preparing for a fight is even more important these days, considering that he and his fiancé welcomed daughter Casey into the world last month.

“I feel a whole other sense of responsibility,” said Grant of fatherhood. “Obviously winning fights and stuff, but more so just being a good human being and trying to provide the best type of life I can and just being a good role model more than anything.”

He’s shown himself to be that already, and after training for nearly half his life, he’s come to the point where a dream fight can be made if he just gets through one more obstacle. So in keeping with his personality, do you really expect him to look at anything other than that obstacle?

“Honestly, it’s the same cliché answer,” he laughs when asked if he’s allowed himself to take a peek at Henderson yet. “I don’t say it because it’s what I’m supposed to say; it’s just the truth. I’m not gonna look past Gray Maynard in any way. Benson’s around the corner, but I’ve got a tough job ahead of me and I’m just gonna put everything I have into that, enjoy it for a day or two if I get the results I want, and then I’ll look at Benson Henderson.”

Well, there may be some other pressing matters in between.

“My fiancé has been taking care of the late night feeds and diaper changes, and I’m thankful for that, but I’m sure May 26th will be my time to take over.”