"I feel like the guys that I practice with every day are gonna be even more dangerous than he is, and I’m gonna try to run right through him and make an example of him." - TJ Dillashaw 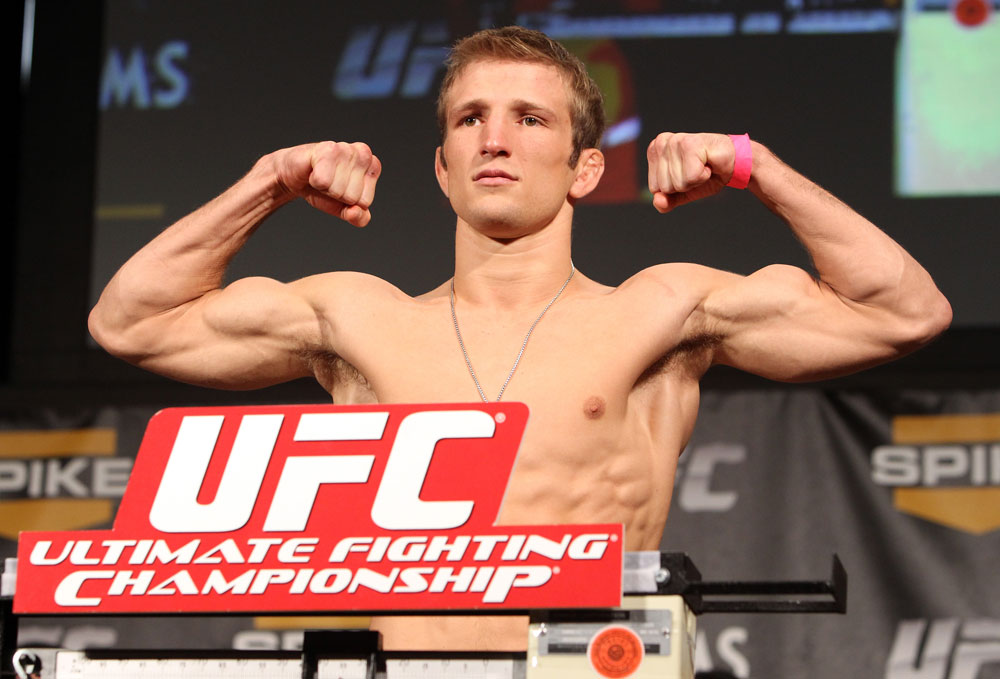 John Dodson fight? What John Dodson fight? That’s the attitude TJ Dillashaw took following the first and only loss of his pro mixed martial arts career last December. For him, the key to being able to regroup and rebound is a simple one.

“Being a competitor, you gotta have a short-term memory,” said Dillashaw, who was stopped by Dodson in the first round of their battle for The Ultimate Fighter season 14 bantamweight title. “If you dwell on it for too long, it’s gonna affect the way you train, affect your confidence, and you gotta draw it up for what it is and forget about it as soon as possible. I can’t really put a time frame on it, but you can’t dwell on it for too long.”

Yet if he can’t pinpoint the exact date when he put the defeat to the side and began the road back, he certainly remembers when he told his team that he wanted to get back in the Octagon.

“It was definitely the first thing I said,” he recalled. “I wasn’t the one making the phone calls, but I told my manager that I wanted to fight as soon as possible and try to get this one behind me.”

Thus began the growing process that can either make or break a young fighter. A three-time Division I National wrestling qualifier for Cal State-Fullerton, Dillashaw’s post-college association with Urijah Faber and Team Alpha Male immediately put expectations on his shoulders and a target on his back when it came to MMA. And so far, the 26-year old has handled everything well, from his 4-0 run in local shows to his stint on TUF14, where he earned a spot in the finals with wins over Matt Jaggers, Roland Delorme, and Dustin Pague.

As for the loss to Dodson, it was just one of those things where a fighter gets caught with a good shot and it’s game over. Some thought Dillashaw was the victim of an early hook by the referee, but a loss is a loss, and as far as defeats go, a quick KO can be easier to explain away and live with than a sustained three round beating.

“I guess it’s better for your confidence going into your next fight, but if I’m gonna lose to someone, I’d like to really lose and know that I got beat by his talent and skills and not only by how quick I think it was called,” said Dillashaw. “Yes, he did catch me, and you saw that I lost my equilibrium there for a minute, but I don’t think I was out of the fight yet. It’s part of the sport to continue through adversity and I just wanted to get that fair chance. It might not have even gone my way if I got the chance to come out of it, but for as long as I trained, at least give me that chance.”

For the moment, that chance has passed, but Dillashaw will get another one on Wednesday when he faces off with fellow prospect Walel Watson on the UFC on FUEL TV card in Omaha, Nebraska. In many ways, facing the Southern California striker is the perfect matchup for Dillashaw, because it will put him right back in the line of fire with an opponent intent on handing him a second knockout loss. What do you when you fall off a bike? You get right back on. Can’t hit the curveball? You’re going to get them served at you over and over until you prove you can handle it. Same thing here.

“He’s a very good opponent for me, I think,” said Dillashaw. “He’s a striker, but I don’t think he’s a very dangerous striker. Watching some tapes on him, I feel like he doesn’t have the killer instinct in him. He’s got a lot of submission victories because he gets taken down – he’s real long and lanky – but that’s not really gonna work on me. I’ve been training with guys that are his size in the same weight class. We’ve got Chris Holdsworth, a very good black belt at our gym who is 5-11 as well as a 135-pounder, and I’ve got three 145-pounders that are 5-11, so I’m getting used to the height, and they’re all very good strikers at our gym. I feel like the guys that I practice with every day are gonna be even more dangerous than he is, and I’m gonna try to run right through him and make an example of him.”

But here’s the biggest difference between the TJ Dillashaw of last December and the one traveling to Omaha: he could have said ‘hey, I got caught; I’m just going to continue doing what I’m doing.’ And he has continued to train with the Sacramento standouts from Team Alpha Male. But when the opportunity arose for him to work with renowned former Chute Boxe trainer Rafael Cordeiro at his Kings MMA gym, Dillashaw didn’t hesitate to accept the offer. Talk about walking into the lions’ den.

“I was definitely shy going in there because I knew who he (Cordeiro) was and all he’s done,” said Dillashaw. “But when I got there, he’s the most humble, nicest guy in the world, and he’s an awesome trainer. He teaches great classes, and they can go very, very hard, which I was a little nervous about, but that’s the way we go at Team Alpha Male too, and it wasn’t really over the top. They said, ‘if you want to get a good look at what’s gonna happen in a fight, you gotta go hard.’ And Rafael does a very good job of instructing a class and teaching what you need to do.”

And by breaking out of his comfort zone, Dillashaw revealed his commitment to the game as he continues to lay the groundwork for what he hopes will be a future title run. It’s a scary proposition for his 135-pound peers, because you’ve got to remember that’s he’s only been doing this for a couple years, but it probably seems longer considering he’s been working with Faber, Joseph Benavidez, Chad Mendes and the rest of a team that is among the most high-profile in the sport.

“I’m a little bit more well-known and been on TV and stuff, but I’m still very new to the game and I’m not gonna buy into all the pressure because I’ve been doing this for just about two years now,” he said. “I feel like I’ve made great gains and I’m proud of everything I’m doing now, and I just want to continue to do that. I’ll put the pressure on myself and just realize that I’m gonna continue to get better, and as good as I have been doing in the last two years, I have all the room to grow, and I’ve got the team to do it.”

So is he ready for his return to the spotlight on Wednesday?

“This is where I want to be and what I want to do,” said Dillashaw. “I’m so excited to get the exposure and to be pumped up as fast as I have been, but I’ve got to take it as just another fight. I try to look at every fight as my toughest, and I gotta get through the adversity that’s put in front of me.”