After More Than Two Years Away From Competition, Former UFC Bantamweight Champion TJ Dillashaw Is Back And Focused On Doing This For Himself.
By E. SPENCER KYTE, ON TWITTER @SPENCERKYTE • Jul. 23, 2021

TJ Dillashaw knows that his past achievements and everything he accomplishes inside the Octagon going forward are going to be questioned and scrutinized; every win carrying an asterisk, every victory being followed by a familiar inquiry: “Yeah, but how do we know he isn’t cheating again?”

The 35-year-old bantamweight brought this all on himself when he tested positive for recombinant human erythropoietin, more commonly referred to as EPO, following his January 2019 loss to Henry Cejudo.

“No, probably not, right?” said Dillashaw, coughing out a laugh that was equal parts understanding and annoyed. “I mean let’s be honest: that’s the true punishment of what I did.

“The two-year suspension is the punishment, but the real one is that everyone is going to question everything and taint everything, even though USADA has come out with so much evidence regarding my situation.

“No matter what, I will always have that stigma, and I did that to myself,” added the two-time former champion, who takes on Cory Sandhagen in Saturday’s highly anticipated main event. “That is the true punishment. That’s the thing you’ve got to learn to get past and that’s the reason I came out and addressed it as I did because now I’m able to move on.”

Dillashaw relinquished the bantamweight title before the official findings and suspension were announced. A few weeks later, once the details of the story emerged and his two-year ban had been made official, he filmed and released a lengthy video on Instagram, addressing what was in front of him.

He didn’t try to fight the results or feign surprise at having tested positive, choosing instead to accept his suspension in full while making it clear that this was his decision and his decision alone. His right arm braced in a sling following shoulder surgery, he apologized to his family, friends, coaches, and teammates, acknowledging that he wanted to use this situation as a way to teach his young son, Bronson, that you deal with the mistakes you make by addressing them head-on, not by pretending they don’t exist or running way.

“It was definitely a tough decision to do it, but it was the only way,” the returning fighter remarked, reflecting on his decision handle things the way he did. “Running and hiding from it, I feel like it I would have continued to have this mental effect on me.

“Whether you see a sports psychologist or a psychiatrist, you learn that people need to talk about their situations and that’s what usually helps them get through what they’ve done, and my best way of talking about it was telling the world what I did. I wanted to own up to it so I could get past it, where if I would have been hiding it, I would still be dealing with that bull****.

“I would still be dealing with having to explain myself, but I’ve already done all that and I get to move on.”

Over the last two years, Dillashaw has most certainly moved on, using his time away as an opportunity to set himself up for life after fighting and spend time with his son that he wouldn’t otherwise have given himself if he were preparing to compete every four to six months. 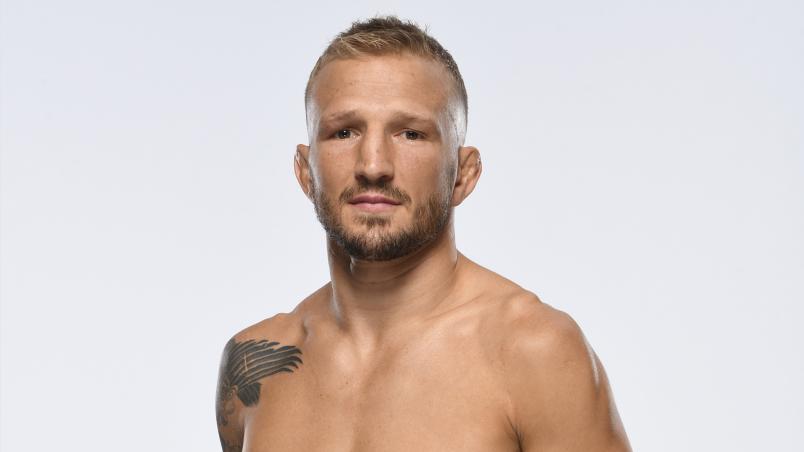 TJ Dillashaw poses for a portrait during a UFC photo session inside UFC APEX on July 21, 2021 in Las Vegas, Nevada. (Photo by Mike Roach/Zuffa LLC)

It has also been an opportunity to get healthy, including having surgery to repair rotator cuff and labrum issues on both shoulders, and to really push himself in training, sharpening his tools for his eventual return and working to fill whatever small holes remained in his game.

“These last two years have been quite a blessing,” began Dillashaw, who rose to the top of the bantamweight division for the first time with a shocking upset win over Renan Barao at UFC 173. “I wouldn’t have said that the first six months. Those first six months were really hard — dealing with my decisions, wanting to escape my head, not be where I was. I went through double shoulder surgery, was laid up on the couch, and I just felt like a worthless piece of **** for the first few months, to be honest with you.

“But I knew that me being busy was the best way to getting this thing past me, so I became a busy businessman. I became a super-busy father, which has been the biggest blessing, because I would have never been able to get that time that I had with my son these last two years.

Preview The Main Event Between Sandhagen And Dillashaw

As much as he’s moved on, Dillashaw also understands that his failed drug test and subsequent suspension are going to be first-paragraph facts in every story written about him for the remainder of his career.

He’s also acutely aware of “the real punishment” he talked about earlier, the lingering questions and skepticism, and the fact there will be plenty of people that want to throw his mistake in his face every chance they get, desperate to never move on, and hell-bent on trying to keep him tethered to the worst decision of his professional life for all eternity.

Luckily, Dillashaw has an easy way of dealing with it.

“To be honest, I don’t really give a s*** what everyone thinks,” he said, laughing. “I’m able to live life and get past it.

“That first six months was rough, man; I’m not going to lie to you — it was a tough situation to go from being on top of the world to where I went, but I feel good with it now.”

Dillashaw has been in the spotlight since he first popped up on the UFC radar as a member of Team Bisping on Season 14 of The Ultimate Fighter, where he made his way to the finals before losing to John Dodson.

Throughout his career, he’s been known for his maniacal competitiveness, a trait that has helped him reach the top of the bantamweight division twice, but that’s also been used to cast the returning fighter as a careless, sometimes dangerous, teammate and poor sport.

Now, as he readies to make the walk to face Sandhagen this weekend, he has the weight of his mistakes on his shoulders, as well, increasing the scrutiny and pressure hovering over this fight and whatever may come next.

For some, it would be too much to bear.

For Dillashaw, it’s exactly where he wants to be.

“I’m pumped to get back in there; I love the pressure,” he said, his excitement and eagerness to return to action evident in his voice. “I’m a guy that performs better under pressure. I perform even better when the lights are on and I get to show off; all the eyes are on me.

“F*** man, everyone loves a comeback story and I think this would be a great one,” he added. “Becoming a three-time champion in the UFC, coming back to reclaim my belt, come through all this adversity…” 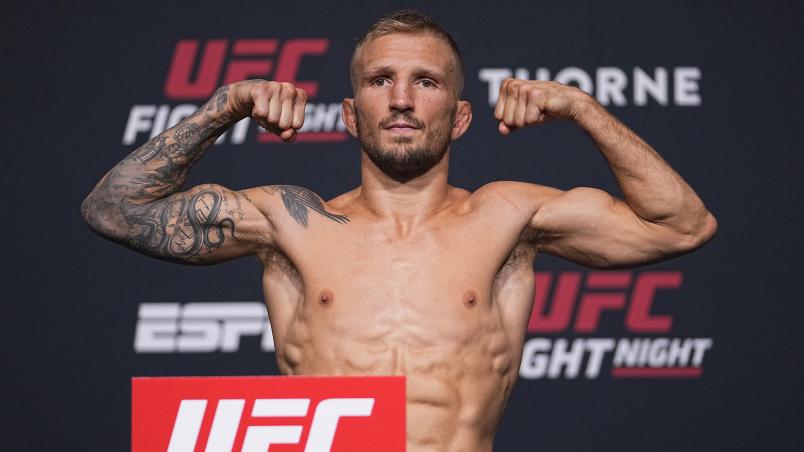 T.J. Dillashaw poses on the scale during the UFC Fight Night weigh-in at UFC APEX on July 23, 2021 in Las Vegas, Nevada. (Photo by Jeff Bottari/Zuffa LLC)

He trailed off, consumed by the thought, and the potentially historic undertaking he’s poised to embark upon.

Dillashaw is one of a dozen fighters to have won UFC gold in the same division on two occasions, a feat most recently accomplished by strawweight queen Rose Namajunas. Thus far, only Randy Couture has managed to win the same title thrice, doing so when he returned to the Octagon and toppled Tim Sylvia to re-claim the heavyweight strap at UFC 68 in Columbus, Ohio.

Joining “The Natural” as only the second three-time champion in UFC history is what is driving Dillashaw as he readies to step in against Sandhagen, who has cemented his standing as the top contender in the division while his former training partner has been on the sidelines.

“There were definitely some other opportunities that they were throwing at me against guys that weren’t in the Top 5 and it made no sense to me,” he explained. “I was like, ‘I don’t need to fight for the paycheck. I want to fight because I want my belt back.’

“I’m 35 years old — I’m not wasting any time; I wanted someone in the Top 5, so me and Sandhagen are going to do this dance. Facing a Top 5 opponent was the only thing made sense, so that’s perfect for me.

“I’ve trained with the guy, I know exactly what I have to do to beat him,” continued Dillashaw, who worked with Sandhagen when he would venture to Colorado, supplementing his work with his long-time sensei Duane Ludwig by getting in work with the Elevation Fight Team. “I’m the more well-rounded fighter, and I can take the fight anywhere.”

Even before stepping in with Sandhagen this weekend, Dillashaw knows there will be some that have no interest in seeing him rise through the ranks to challenge for the title again or want him to have a longer road as a result of his prior mistake.

No matter what happens on Saturday, he knows the scrutiny will be ever-present and some will forever want to deny him another opportunity to fight for UFC gold.

Just like everything else in this comeback, he’s ready for it, and he has a plan for how to deal with it.

“To be honest, I’m too f****** good; I’m too good for those things to be taken away,” he said when asked about the barriers that some will erect in front of him no matter what. “I’m going to come back, have a great performance, and I won’t be denied; it’s inevitable.”

Everything changed for Dillashaw two years ago, and while he’d never choose to experience things the same way if given the chance to do it again, it has brought him to a point where his reasons for stepping into the Octagon this weekend are dramatically different than they were in the past.

He’s no longer fighting to provide for his family and secure their future; those things are taken care of, and the next chapter of his life — the one that takes place outside of mixed martial arts — is already being written.

Now, he’s fighting because he wants to, because he loves it, and that ultra-competitive side gets to lead the dance, making him a different kind of animal heading into this weekend.

“These two years have been a true blessing,” he said once more. “I would never choose to do it the way I did it if I had it to do over again; I would never want that to happen, I wouldn’t have taken that fight, but it was a blessing because I know what I’m going to do once I’m done fighting and so now there isn’t that pressure (to provide for my family).

“It’s a different mentality going out there; I get to do it just for myself now,” he added. “It’s different and we’ll see how that translates into my performance, but I’m obviously hoping, and expecting, for it to be great.”