TJ Dillashaw - The Next Alpha Male

"Obviously I’m happy to win, but I want to be the aggressor who is always
going for that finish, being aggressive with my ground-and-pound,
flashy with my standup." - TJ Dillashaw 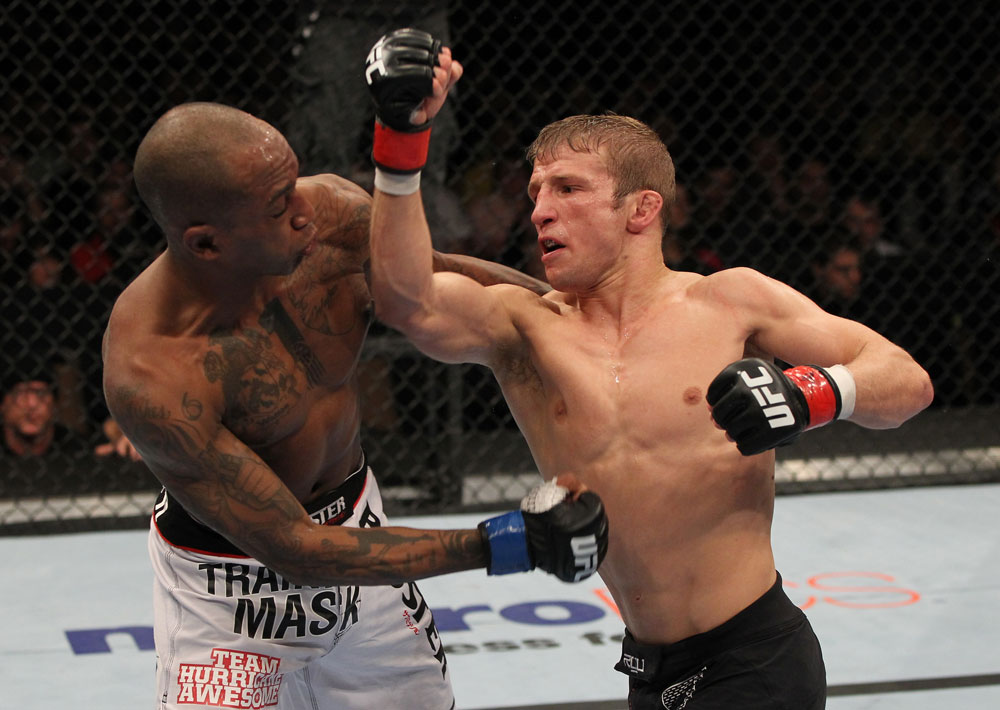 TJ Dillashaw has spent the last couple years discovering that being a part of the respected and talented Team Alpha Male camp comes with both benefits and challenges.

When he was just another 5-0 Ultimate Fighter hopeful a couple years ago, his affiliation with the camp that consistently produces the best lighter weight fighters in the UFC gave him instant cache. Earmarked as a favorite heading into the house, Dillashaw came up short, losing to John Dodson in the bantamweight finals, but in combination with his Alpha Male credentials, his time in the house helped him get a leg up on his fellow cast members as the cameras stopped rolling and their careers in the UFC began in earnest.

While others from Team Bisping and Team Mayhem were rounding out preliminary cards and fighting on Facebook, Dillashaw was making his post-TUF debut on FUEL TV, collecting a dominant unanimous decision win over Walel Watson.

The flipside of that, however, is that coming from the same team as Urijah Faber, Joseph Benavidez, Chad Mendes, and Danny Castillo puts a target on your back and lofty expectations on your shoulders. People expect more from the members of the Team Alpha Male camp, and that extends to Dillashaw. With a number of his teammates having taken up permanent residency at the top of their respective divisions after quickly climbing the rankings, the same is expected of the 26-year-old bantamweight.

Additionally, being the latest member of the highly competitive, highly successful outfit to enter the UFC, finding a way to carve out a path of his own will be a challenge for the former Cal State Fullerton wrestling standout, but it’s one Dillashaw is ready to endure.

“I think it’s real important to separate,” admits the hyper-confident Alpha Male. “Obviously I love to represent my team, and how we have a stacked team, but I need to make my own name. I need people to know me as more than TJ Dillashaw from Team Alpha Male. Like Urijah – everyone knows him just as himself, not as a member of his team.”

Like those that have come before him, Dillashaw too takes cues from Faber, the former WEC featherweight champion and head of the Alpha Male outfit, who is one of the biggest stars in the sport and someone people gravitate toward both when he’s inside and outside of the cage.

“You learn from experience of being around him. With fans, he makes time for everybody. He talks to them like he’s talking to me. He gives every person the same treatment. He’s nice to everybody, and that’s definitely a good way to build fans. But it’s also how much of an entertainer he is when he’s fighting – he’s putting on a show, he’s being very aggressive, always looking for a finish. That’s what people always want to see, and that’s why you get bonuses for finishing a fight.

“I want to be that person that’s not happy just to win. Obviously I’m happy to win, but I want to be the aggressor who is always going for that finish, being aggressive with my ground-and-pound, flashy with my standup. I need to build my name that way.”

Dillashaw showed flashes of his potential in his bout with Watson, controlling the contest from start to finish. He was able to get inside on his longer, rangier opponent, stinging him with his hands before taking him to the canvas with little resistance. On the ground, Dillashaw did damage and worked to dominant positions, forcing Watson to defend numerous submission attempts en route to a clean sweep of the scorecards, including earning a pair of 10-8 rounds from two judges. In spite of the one-sided victory, Dillashaw took a little heat for failing to secure the finish.

“Obviously I knew I won the fight, but you see all these bad decisions, so I don’t want to leave it in the hands of the judges, and just the fact that I want to be known as a fighter who is going to finish people. I got into a lot of good positions where I thought I was going to finish it, but he just had some good defense in those situations. He’s a durable guy. The only grief I got from not finishing was from myself. I’ve heard it from a couple people – “Oh, you should have finished the choke” – but I mainly just give myself the grief because I hold myself to a high standard.”

Next up for the former Ultimate Fighter finalist is a meeting with Vaughan Lee on the main card of Wednesday’s FUEL TV event headlined by middleweights Mark Munoz and Chris Weidman. Though he was complimentary about the compliment of skills Lee will carry with him into the cage at the HP Pavilion, Dillashaw sees this as another chance to establish himself as someone to keep an eye on in the bantamweight division.

“I think it’s a very good fight for me. He’s a good fighter; he’s pretty good in every situation – he’s got good, technical standup, and he’s a strong, powerful guy. I just feel like I’m a whole lot more athletic than he is, a whole lot faster on my standup, and that I can dominate there. He’s supposed to be a very good grappler – he just submitted Kid Yamamoto, and he’s known for his grappling – but I still think it’s a little overrated. I feel like my grappling is actually stronger than his.”

Some might bristle at Dillashaw’s assessment of his matchup with Lee, and say that his self-confidence crosses over into cockiness, but every fighter will tell you they have to believe they are the better man every time they step into the cage. While some choose to offer effusive praise of their upcoming opponent, Dillashaw is more direct and earnest in his breakdown of his impending meeting with the 12-7-1 Birmingham, England resident, though he’s quick to make it clear that though he expects to dominate, he’s not looking past Lee in any way.

“I don’t see him as one of the toughest guys in my weight class, and I think it’s a very good fight for me, but I’m not going to look past him,” he says. “I still respect everything he does as an MMA fighter; he’s powerful, he’s got standup – and anybody can get caught. His jiu-jitsu is real good, and anybody can get caught there, so I just have to make sure that I’m in the moment, respecting everything that he’s got, but not respecting it to the point that I don’t fight my game. I have to be present while I’m in the cage – not looking to the future, but worrying about the now.”

Should he earn a victory over Lee on Tuesday night, Jon Anik will likely step into the cage to ask Dillashaw about his future, namely who he’d like to face next. It’s a question the free-speaking bantamweight prospect feels is a no-win situation.

“You always get that question, and it’s always hard to pick who you want to fight because you don’t really have that much choice, you know?” Dillashaw asks rhetorically with a laugh. “They want you to call someone out, but it’s really how the UFC wants to build me, what they think of my skills, and how much improvement I’ve shown since last time in this fight. There are so many good guys at the weight class, you don’t know who they’re going to put you with or how they’re going to build you, so I’ll leave that up to the UFC.

Like his teammates Chad Mendes and Joseph Benavidez before him, Dillashaw knows the questions about a potential matchup against Faber are on the horizon, which only further adds to his dreading of the post-fight question that is always asked.

“How am I supposed to call out the best guy in the world when the best guy in the world is Urijah? He should be getting that belt here shortly, so I can’t go and do that. I know those questions are going to come, but I think it’s a good (situation) with me and Urijah. He’s at the top of his career, he’ll get that belt, and by the time I get there, he might be coming out. Who knows? I owe my whole MMA career to Urijah. I’m his main training partner. It’s not going to happen.”

According to Dillashaw, the one thing he knows will happen is that he’ll earn another victory and take another step up the bantamweight ladder on Wednesday night in San Jose.

“Like I said, I’m kind of disappointed I didn’t finish my last fight, so I’m looking to show that I’m better than Vaughan Lee in every situation. It might be a submission, but I’m hoping for a KO. It could be anything. I’m definitely showing everything I’ve got and I’m finishing this fight.”