TJ Dillashaw: For Coach and Colleagues

"To me, the sky’s the limit. I can beat this guy. There is nothing
super-special about him. I feel like I’m just as good as he is and I
just have to show up with my A-game." - TJ Dillashaw

TJ Dillashaw always expected to be in this position, standing in the Octagon with a UFC title awaiting the victor.

From the time he broke into the sport at the start of 2010, the 28-year-old Cal State-Fullerton product has been focused on climbing the ladder and having championship gold wrapped around his waist. Fiercely competitive and unflinchingly confident in his skills, there hasn’t been a moment in his career where Dillashaw didn’t believe he could reach this point.

But he’s also quick to acknowledge that he wouldn’t have arrived in the main event of UFC 173 battling Renan Barao for the bantamweight championship without the influence of his colleagues at Team Alpha Male and their soon-to-depart head coach Duane “Bang” Ludwig.

“I’ve learned from all of their successes and failures,” says Dillashaw, who becomes the third member of the Sacramento-based fight team to challenge for UFC gold in the last six months, and fourth representative of the camp to earn the distinction overall. “I’ve gotten to take shortcuts in this game.

“I’ve learned a lot of stuff in a short amount of time and made huge improvements in my game, and I owe it all to them and my new coach. They’ve all done so much to get me to where I’m at.

“Being through their championship camps and learning what it takes to deal with the intense camp, the media, the spotlight and everything that comes with it has definitely helped me get prepared for this one and made it a little easier.”

In the time that Dillashaw has been a part of Team Alpha Male, the trio of Urijah Faber, Chad 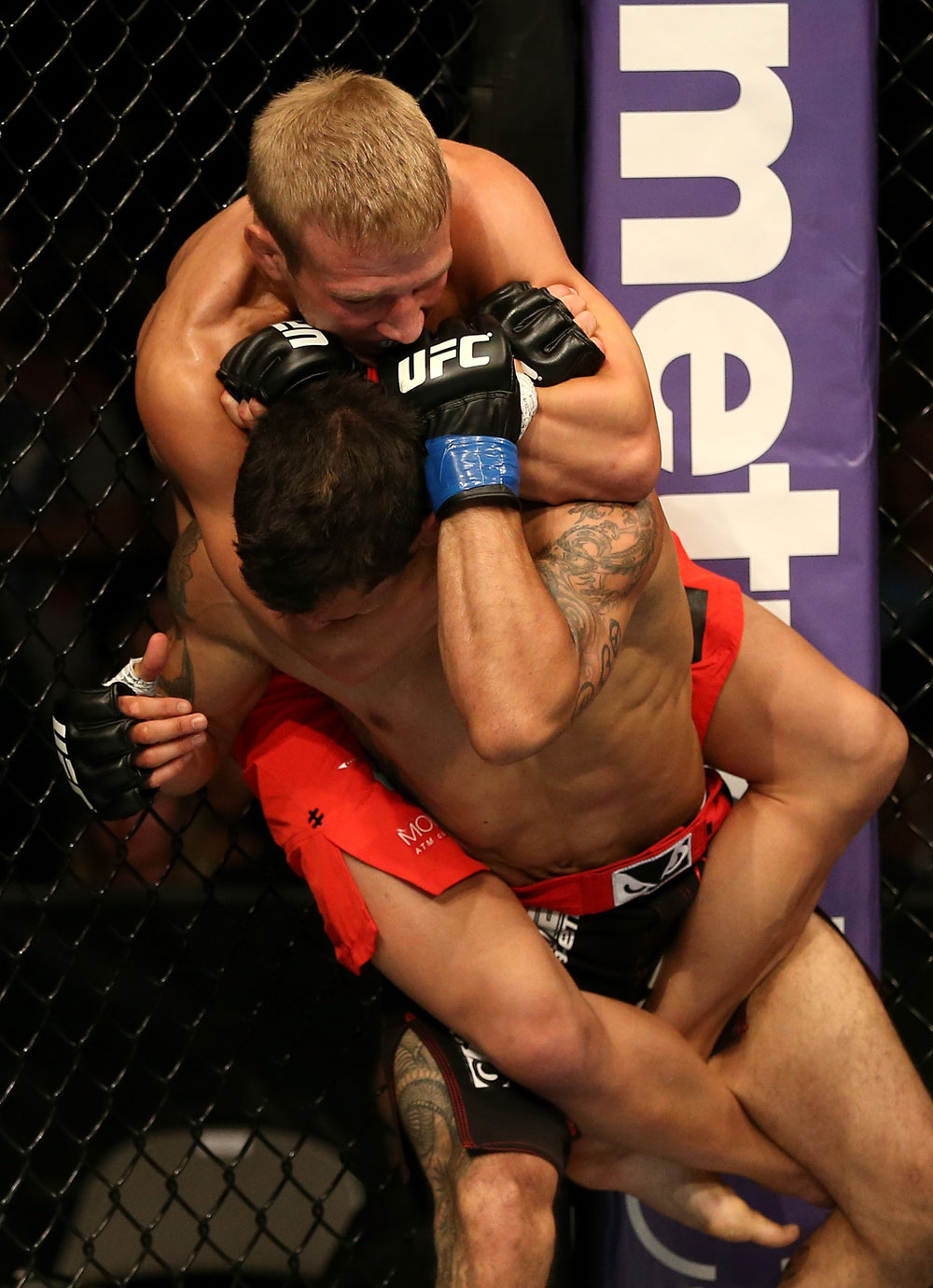 Mendes and Joseph Benavidez have been a part of eight championship bouts, six of those coming inside the UFC Octagon.

While a title belt has yet to make the trip back to the California capital, the knowledge Dillashaw has been able to glean from being a part of his teammates’ battles is invaluable. Beyond winning the championship for himself, being able to bring the bantamweight strap back to the Ultimate Fitness facility Team Alpha Male calls home to share with his teammates is one of his greatest motivators.

Not to break the supposed curse that follows this squad, but in part to change the narrative that perpetually hovers over this team.

> Watch: The SHOOT! with TJ Dillashaw

“How many other gyms have done what we’ve done?” he asks, citing the run of championship appearances and overall success Team Alpha Male has enjoyed on the biggest stage in the sport. “There are only a select few that can be champion of the world. It’s crazy to me that we’ve had six chances. You see gyms that don’t have six chances to become champion, but we have one of those elite gyms and it’s crazy that it hasn’t worked out yet.

“(Winning the title) would be insanely crazy for me because I’ve been through all those championship camps for those guys - been around for every single one of them - and they were all capable of winning those titles. Any one of them could have won their fights - it just didn’t go their way. MMA is a crazy sport and it’s almost dumb luck that we didn’t win some of those fights because we were definitely capable.

“Things just haven’t worked out perfectly for someone yet, but they’re about to and it’s going to be crazy when I’m the one that’s able to bring the belt home to the gym. I’ve been through all their camps, watched all of them fight - looked up to them from before I got into the sport - and for me to be the one that achieves the greatness we’ve been training for every day will be insane. It will be a huge accomplishment.”

The opportunity to deliver a championship belt to his head coach Duane Ludwig is also helping push Dillashaw into this weekend’s main event matchup with Barao.

Ludwig, a former UFC competitor, joined Team Alpha Male as head coach at the start of 2013, and the results were immediate. Under his guidance, the squad went unbeaten for an extended stretch, with Mendes and Benavidez working back into title contention in their respective divisions and Faber putting together arguably the most impressive four-fight winning streak of his lengthy career.

“Bang” was heralded as the missing piece of the championship puzzle for the elite team of lighter weight fighters, but when both Benavidez and Faber came up short in their most recent quests to claim UFC gold, all the success that brought Ludwig great praise at the outset of his tenure was quickly replaced by questions like “Well, what has he really done though?” 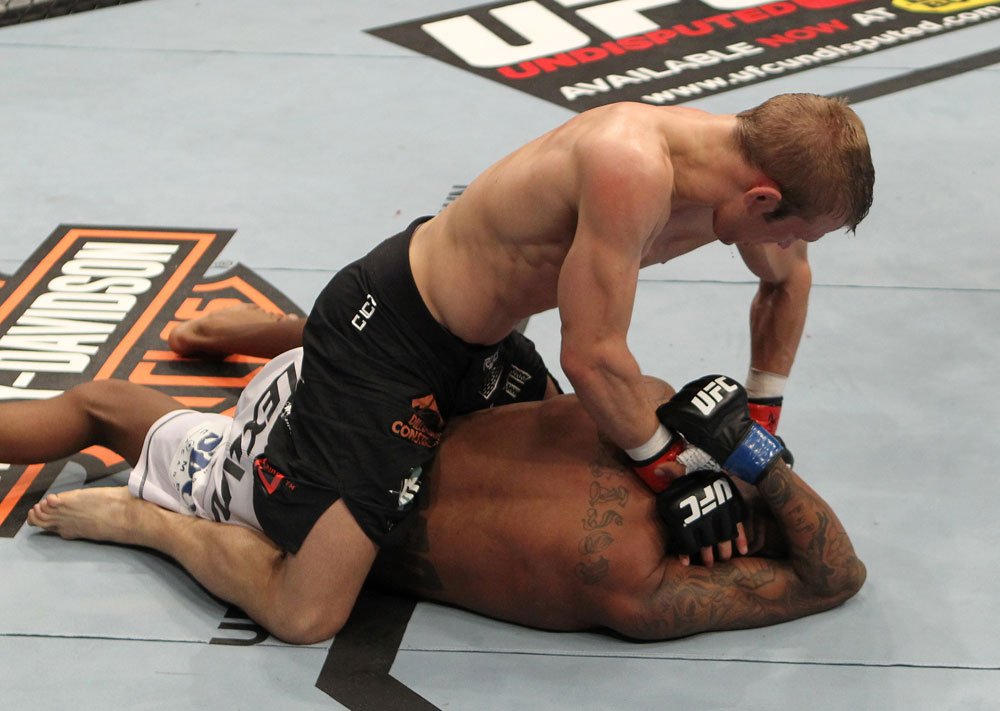 Having announced his departure from Team Alpha Male earlier in the year, Dillashaw’s fight will be his last at the helm and the former Ultimate Fighter finalist would like nothing more than to send him home to Colorado with that ever-elusive championship victory.

“He’s been a huge influence on the team and especially on me,” Dillashaw says of Ludwig, who holds the record for the fastest knockout in UFC history. “I feel like I’ve learned more from Duane than anybody. I think I picked up on his style faster than anybody in the gym and it would be definitely winning it for him too.

“Ultimately, it’s for myself, but I would love to get this belt for him as well because he works as hard at his job as I work at mine, so I feel like he deserves a UFC champion, and I would love to be the one that gives him that belt. It’s a Cinderella story that his last day coaching, he’s fighting for a UFC title and it’s me, because he and I are super-tight.”

And Dillashaw is confident that by the time Saturday night turns into Sunday morning, he’ll be the UFC bantamweight champion.

Ever confident, the 10-2 title challenger is finding peace and enjoyment in an unfamiliar role as the fight draws closer. Because of his wrestling pedigree and team affiliation, Dillashaw has spent his entire career as the betting favorite come fight day, but that isn’t the case here and he couldn’t be happier.

Despite the scope of the challenge, he’s ready for the task at hand.

“I’ve been a favorite in every single one of my fights and that is a lot of added pressure,” he admits. “Sure you want to be the favorite going into your fights, but everyone is expecting you to win and that puts pressure on how you’re supposed to perform. Going into this fight as the underdog is kind of nice - there is no pressure on me. No one is expecting me to win this fight.

“I can’t look at this as “Oh, there’s no way I can win this fight” because I’m the underdog - I believe it for myself, and that’s the only thing I have to worry about. That’s a lot of release for me - not having to worry about everyone else and their expectations for me. It’s nice to have the roles reversed and I can’t wait to prove everyone wrong.

“Renan Barao is a very great champion - he’s on an insane win streak and he brings his A-game to the table every single time he fights, so it’s going to be an insane challenge to beat the guy.