T.J. Dillashaw: The Champ is Here

"You can’t put that pressure on of trying to top your last performance. My goal is to just go out there and win. I don’t care how I do it." - T.J. Dillashaw

There was no summer vacation for T.J. Dillashaw. Not that he’s complaining, but when you’re the newest UFC champion, time is not your own anymore.

“I’m definitely enjoying it, but I didn’t have any down time, that’s for sure,” Dillashaw, who won the UFC bantamweight championship from Renan Barao in May and will fight him once again this Saturday in Sacramento, said. “I went straight from the big victory / media tour and back into training. So it would have been nice to enjoy with my family and my wife and my friends, but I feel like it’s a lot shorter of a turnaround for Renan than it is for me.”
> Go Behind the Scenes of T.J. Dillashaw's Win at UFC 173!

That’s the fight business, and as the top dog in his division, Dillashaw understands that there are more pulls on his time, more obligations, and more pressure. And while it would be nice to chalk it up to California cool, in reality, his ability to embrace it all comes down to the fact that this is what he – and every other fighter – wants: to be the man.

Even if that requires less free moments and a target on your back. 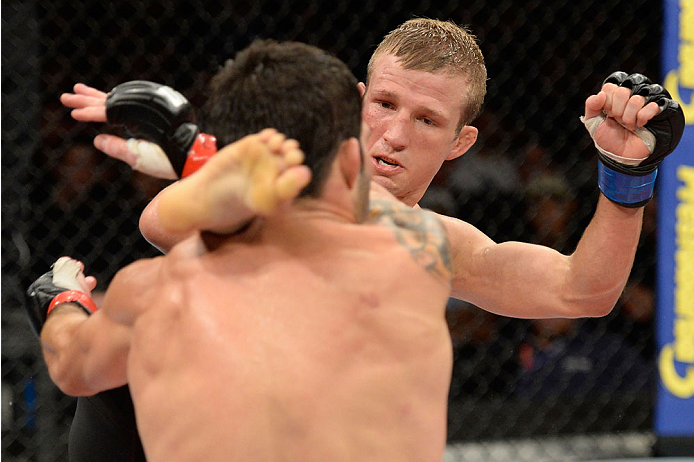 “I have no complaints about having the target on my back if it means I have the belt around my waist,” Dillashaw laughs, as comfortable as you’ve seen any young champion getting ready to defend his belt for the first time. But despite the relative ease he showed in dismantling Barao the first time at UFC 173 in May, he’s not feeling the pressure to repeat what most consider to be one of the great performances in UFC history.
> Watch: Countdown to UFC 177 - Dillashaw vs. Barao II

“You can’t put that pressure on of trying to top your last performance,” he said. “My goal is to just go out there and win. I don’t care how I do it. Obviously I’m going to go for the finish, but if I get a decision and squeak it out, that’s fine with me too. He’s a great champion and I expect him to come back hard and switch some things up, but I definitely see myself winning the fight. I’m not gonna try to outperform my last performance, because that’s just added pressure. If I do, awesome; if I don’t, I’m okay with that. As long as I’m holding on to my strap, that’s the most important thing.”

The win over Barao was a brilliant mix of technique, strategy, and determination, with Dillashaw dominating from the opening horn until the fight was stopped in the fifth round. To call it the greatest upset of all-time, like some have, almost downplays what Dillashaw brought to the table heading into the fight. He was an underdog, and rightfully so against a fighter who had been unbeaten for over nine years and 35 fights, but the challenger from Sacramento was no sacrificial lamb who pulled off a lucky punch. He also visualized victory, though not necessarily in the way it ultimately turned out.
> Watch: T.J. Dillashaw and Teammates Relive the Champ's First Day at Team Alpha Male

“I expected a five round fight and that I would outpoint him and be the better fighter all around,” he said. “I expected to have a war on my hands.”

It wasn’t that close. Barao was certainly game and he went out on his shield, but it was Dillashaw in control the whole way. When it was over, he was tempted to say “I told you so” to those who doubted him, but he refrained.

“All those people that were doubters, I was telling you I was going to win,” Dillashaw said of the thoughts that ran through his head as soon as the bout ended. “I was feeling that going over me as soon as I won. But I expected to be that big of an underdog because of who Renan was and his previous fights. Not only being undefeated for nine years, but just being a champion and the way he was winning fights, he looked unstoppable in a lot of people’s minds. Not mine, but in a lot of people’s. I figured to be a big underdog in the fight, so I wasn’t surprised by it.”

What also didn’t surprise Dillashaw is that Barao claimed after the fight that he was basically fighting on autopilot after getting dropped in the first round. It’s not a point to produce any bad blood; in fact, Dillashaw believes that when you’re the kind of fighter Barao is, you really can’t fathom losing for any reason other than it being some once in a lifetime fluke. 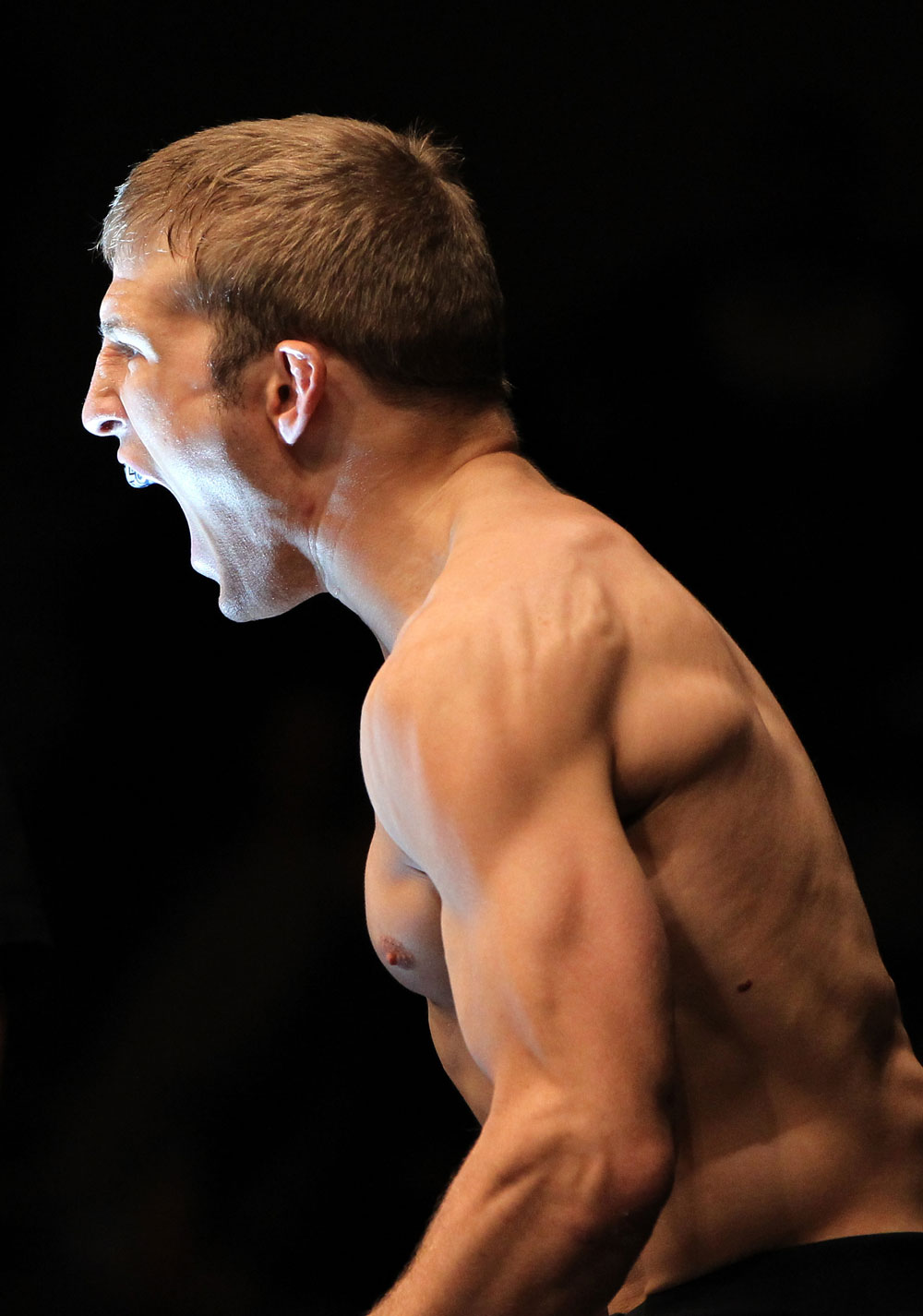 “Because he’s been dominant for so long and hadn’t lost in forever, he had to create some sort of excuse or reason why he lost,” the new champion said. “He’s not just gonna say that he wasn’t the better man. A great fighter, a champion like him, I guess I expected him to say something, and that’s why I’m glad I didn’t finish it in the first round. I was trying to finish it, but looking back on it, I’m glad I didn’t because I got to prove that I was the better fighter that night for (nearly) five rounds. So I wasn’t surprised.”
> Watch: Dillashaw Reflects on First Title Defense

He’ll get the chance to prove it once more this Saturday in his backyard. It’s a quick turnaround for both fighters, but Dillashaw believes it will be rougher for the Brazilian.

“It’s not a lot of time to change who he is as a fighter or recover from that beating,” he said, clear in the belief that he took something more than the belt away from Barao. Getting your confidence back after a fight like that can be difficult, something Dillashaw has dealt with in the past, both in wrestling and after his knockout loss to John Dodson in the Ultimate Fighter season 14 finals in 2011. But as soon as he let the losses fade into the rearview mirror, he never looked back again.

“It’s definitely difficult, especially when it’s so new and it just happened,” he said. “It does take time to get past things and forget about it, but I think it’s something I’ve developed through competing in wrestling. You lose those big matches, something you’ve worked so hard for, and by not succeeding, it builds you stronger as a competitor and you learn to deal with the losses, and you actually learn more from them. You’ve got to move on and learn from it, and that’s what I’ve done.”

He hopes for the last time.