Dana White Contender Series Alum Ready To Make The Most Of New Contract
By Thomas Gerbasi, on Twitter: @TGerbasi • Feb. 28, 2020

TJ Brown had waited a long time for his shot at getting into the UFC, and five minutes into his fight with Dylan Lockard last August, it looked like the wait was about to get longer.

Dropped in the first round, Brown then lost a point for an illegal knee, meaning he would either have to win the next two rounds to get a draw or finish the 6-1 Lockard. Most would have panicked. Brown calmly walked back to the corner manned by UFC vet Roli Delgado and got ready to get the win by any means necessary.

“Initially, you want to freak out and lose control, but luckily for me, with 20 professional fights and a lot of amateur fights, I've seen things like this,” Brown said of the Dana White’s Contender Series bout. “I made the mistake of losing control and losing focus before, and with my experience and my coaches at my side, I was really able to keep my focus and stay on course and remember the job at hand, which was to finish this guy and put him away. So going back to the stool, I was lucky to have my coach Roli Delgado there, my jiu-jitsu coach, and we were able to put together a game plan, keep my eye on the prize and work towards the finish, and that's what we did.” 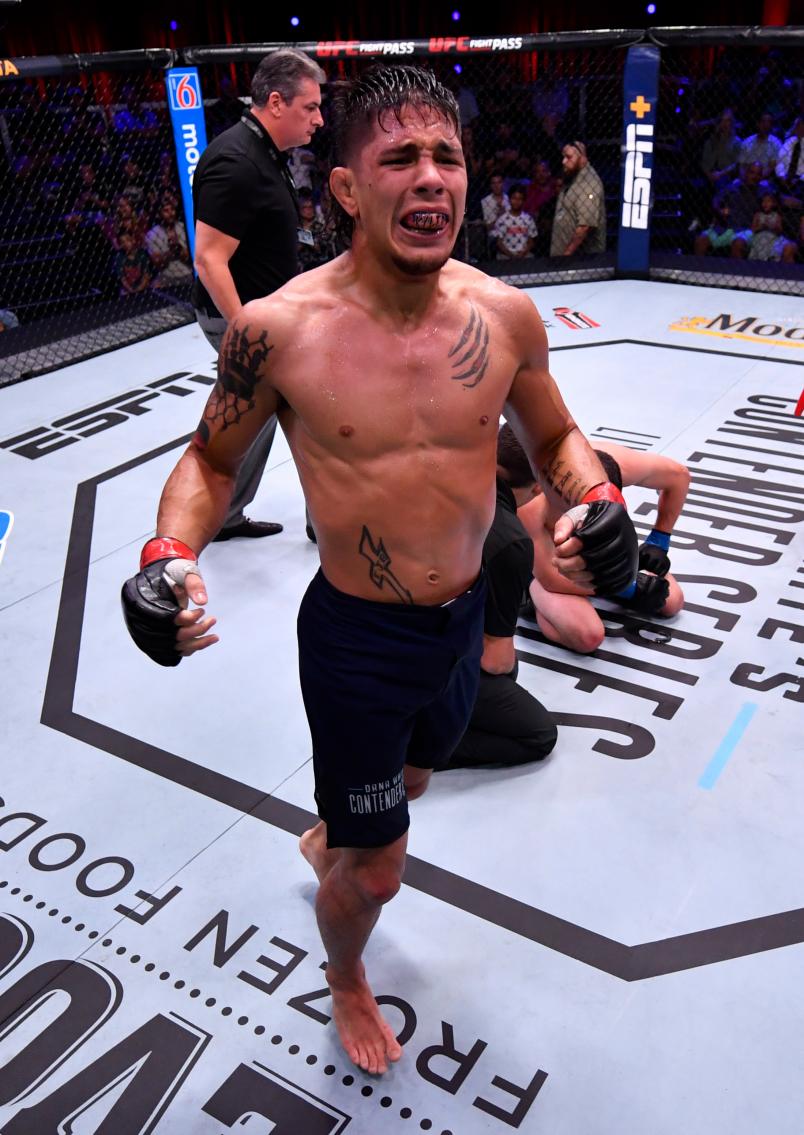 In round three, the Brazilian Jiu-Jitsu brown belt locked in an arm triangle choke, and with two minutes and one second left in the fight, TJ Brown had the victory. A few minutes later, he got a UFC contract.

And now he’s here, ready to get on with the next chapter of his career.

Watch Brown Saturday At UFC Norfolk With Your ESPN+ Subscription

“I've had a few bumps along the way, and I've just had to persevere and stay the course,” said Brown. “I strung together those wins this last year and then got the call for the Dana White's Contender Series and got the win there and it's all finally coming together.”

On Saturday, Brown makes his Octagon debut against fellow Contender Series graduate Jordan Griffin. It would be the perfect opportunity for any debutant to take their foot off the gas after a long road to the big show, but Brown is carrying the same determination that got him here into every fight from here on out. In other words, he has not forgotten any of those bumps along the way.

“To be honest, for me, this is my thing,” he said. “I don't have a degree, I don't have something to fall back on - this is it. It's kind of make or break for me, so that's surely a motivation on its own, but I'd also like to mention my eight-year-old son Kyler Brown. I raise my son on my own, and I'm just trying to do everything I can to make the best life for me and him.”

Kyler is already wrestling, and it wouldn’t be a surprise if he follows in dad’s footsteps one day, and if his visit to watch the Contender Series bout in Las Vegas is any indication, life as the son of a UFC fighter isn’t too bad.

“He's super pumped,” said Brown. “I actually brought him up to the Contender Series fight and he absolutely loved it. He watches a lot of the fights with me, but when he was younger, I didn't bring him to the fights. I didn't know if he could really understand it. You know as well as me that really bad things can happen quick. So I was really worried about that. But as he's getting older, I think he understands that wins and losses are gonna happen, and that's just like life. He's along for the ride with me and he loves the whole experience, as well.” 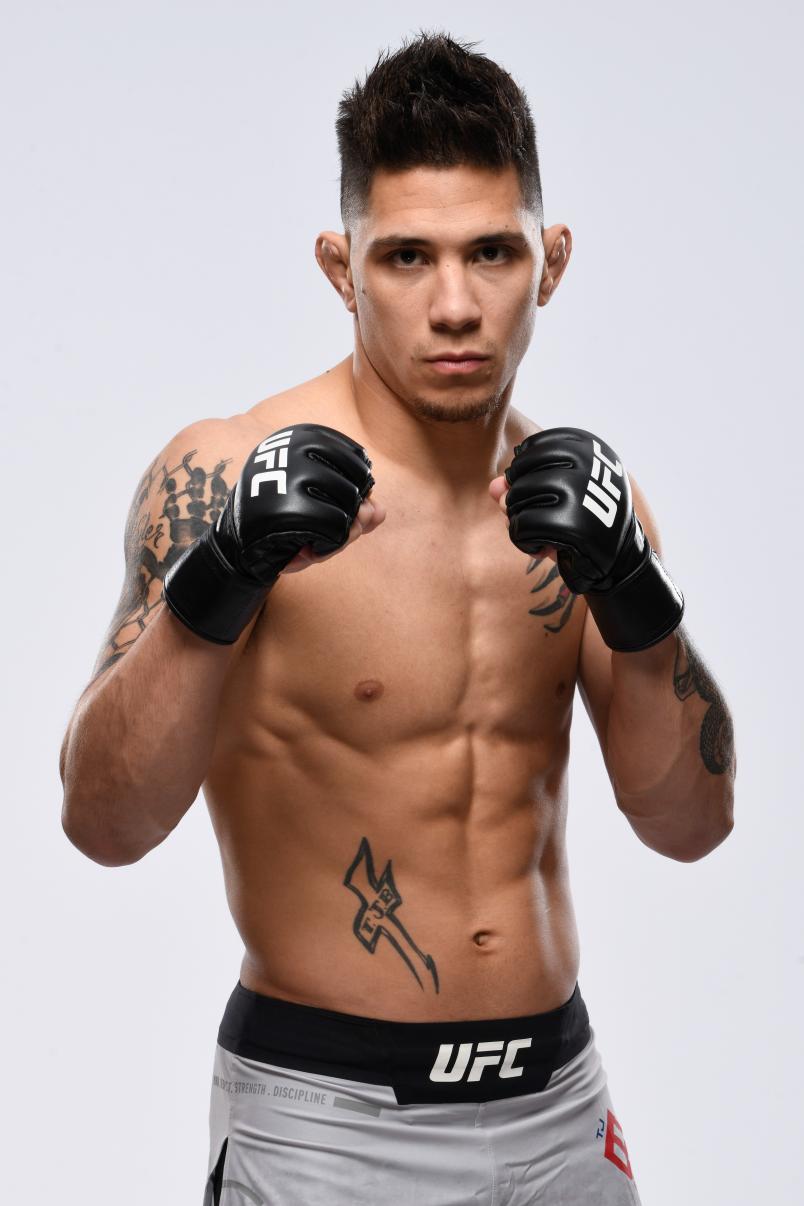 There will also be a likely push from the youngest member of the Brown household for dad to make it into the next UFC game, an assumption that brings a knowing laugh from the 29-year-old, who is well aware that to get into digital form, he’s got to start building a resume in the Octagon, and that’s just fine with him, because on fight night, he brings it.

“If you look at my record, 14 wins and 13 finishes,” said Brown. “That's just the fighter I am. I'm going in there, kill or be killed, and going in there to get the finish. I can finish you on the feet as well - I had two head kick knockouts last year - and along with all my submission wins, I can finish this thing on the ground or on the feet, and that's what I'm looking to do in this fight coming up.”

And if you haven’t had a chance to see Brown, you can start to judge him by the company he keeps, which means if you’ve seen his buddy and longtime training partner Bryce Mitchell, you’ve seen the type of attitude “Downtown” Brown brings to battle. As for the reality that two Arkansas natives are now doing their thing in the UFC, Brown says this is just the beginning.

“We have a lot of talent coming out here from Arkansas, and hopefully with me and Bryce and Roli and all of us together, we can kind of lead the way and show that we have something to prove down here,” he said. “It also gives me a chip on my shoulder to show everybody that we've got what it takes down here.”

Brown has already proved that he can fight and step up his game when needed, two traits that should take him far in the UFC. As for all the other intangibles that make stars in this sport, Brown, like Mitchell, has those as well, and he’s comfortable knowing that someday, someone may be saying that they want to be like TJ Brown.

“You see a lot of personalities out there and I do believe I can fill that role,” said Brown. “I think I'm one of the good guys. I'm a family man, I'm very disciplined and a hard-working guy and I am somebody I believe somebody can look up to. I want to lead the way, and hopefully through my hard work, I'm able to set the standard.”