TJ Brown Is Out To Capture Momentum

Forget “Downtown” TJ Brown. The way the Arkansas native sees things, you can just call him “Mr. Bounce Back” after he scored his first UFC win in his third try against Kai Kamaka last May.

“I hate to say it, but I've been there time and time again,” said Brown of winning with his back up against the wall. “You ought to call it ‘Mr. Bounce Back,’ but I know that about myself. I know when the pressure's put on me, my back's against the wall, I'm gonna come out there fighting, and that's what I needed. There was no other option for me. I knew where I was at, I knew what the stakes were, and I had no other choice. I came out fighting and got the W. That's one thing you could put behind my name is that I will always find a way to bounce back.”

In a 15-8 pro MMA career that began in 2013, Brown has only lost two straight twice. The first time, in 2016, he rebounded with two consecutive victories the next year. By 2019, he had earned a UFC contract with a submission of Dylan Lockard on Dana White’s Contender Series. Defeats to Jordan Griffin and Danny Chavez followed, but then “Mr. Bounce Back” lived up to that billing by decisioning Kamaka. It wasn’t Brown’s most spectacular outing, but a win’s a win, and he’ll take it.

“It feels great just to finally show the world your worth,” he said. “It was almost like a good verification as well. There was definitely a lot of weight lifted off my shoulders. It's all I ever wanted to get a UFC win. And then as soon as it was over, I was like, ‘Man, what's next?’ (Laughs) I guess it's always gonna be that way. That's how life is - you're always gonna be wanting more. So here we are again.”

Here we are, indeed, back at the APEX in Las Vegas and ready to take on a late replacement foe in Charles Rosa, who stepped in on less than a week’s notice when Gabriel Benitez was forced from the bout. But opponents really don’t matter to Brown at this point. It’s all about winning, regardless of who the name is in the opposite corner. So don’t expect the 31-year-old to be sitting back and basking in the glory of his first UFC victory. 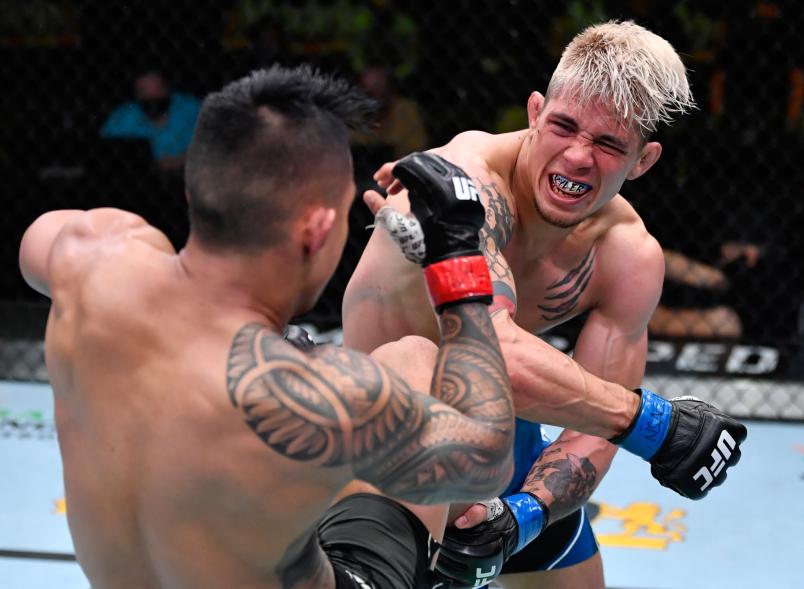 TJ Brown punches Kai Kamaka in a featherweight bout during the UFC Fight Night event at UFC APEX on May 01, 2021 in Las Vegas, Nevada. (Photo by Jeff Bottari/Zuffa LLC)

“In all reality, I keep this huge amount of pressure on myself at all times,” he said. “I would love to tell you there's no pressure, I'm good, but nah, I put so much pressure on myself, and it's really what I think keeps me hungry and keeps me in the gym every day and has me doing these two a days every day. I suppose it's healthy, but I'm gonna be keeping the same attitude all the way through until I'm done fighting.”

Healthy? Brown laughs, before admitting, “It is a crazy life.”

But it’s what he does, and if keeping that pressure – real or imagined – on his shoulders is what it takes for him to perform at his best in the Octagon, so be it. It’s the choice he made and he’s not backing down from it.

“It's what I have to do,” he said. “I enjoy performing, I enjoy winning, I enjoy the money, but what I enjoy the most is the lifestyle I built for me and my son. This is paying my bills, this is allowing me to live this lifestyle. I can spend time with my son, I can do things for him and give us the home that we have, so there's no other option - this is what I do and I happen to be good at it.”

He expects to show how good he is more than ever in 2022.

“We're getting busy, man,” Brown said. “This last year, I got the win but I wasn't as active as I want to be. Let's be honest, I'm not getting any younger, I'm trying to put together some fights and let's string together some wins.”