TJ Brown Feels Everything Coming Together

After losing in Norfolk, TJ Brown wants to let everything go in his second UFC appearance.
By Thomas Gerbasi, on Twitter @tgerbasi • Aug. 12, 2020

A TJ Brown fight is usually going to end in one of two ways: the Arkansas native will finish his opponent, or he will be on the receiving end of a knockout or submission.

Either way, Brown is going out like Tony Montana at the end of Scarface, but 14 out of the 21 times he’s stepped into sanctioned pro combat, he’s had a happier ending than Al Pacino’s iconic character.

In February, it was Brown’s turn to show his kill or be killed style to the UFC faithful, but while the fight ended before the judges got involved, it didn’t look like the usual performance from the Little Rock product before he was submitted by Jordan Griffin.

“It was tough,” said Brown. “I worked so hard to get that contract and to get that first UFC fight. I was telling a guy the other day I was so upset because it wasn't the fact of winning the whole fight and then getting choked at the end that bothered me. I was more upset that I didn't open up. It just wasn't my fight.”

There could have been a number of reasons behind Brown’s loss. The first time UFC jitters, Griffin just being the better fighter, or Brown taking his foot off the gas just a bit after finally getting to where he wanted to be all these years.

“It was a bit of ‘I got to the UFC,’” he said. “There was a lot of hype and a lot of lights and a lot of things going on and I took the safe route. I wasn't out there being myself. I was fighting a bit safe, a bit shelled up, and that's what's kept me up at nights, the fact that I didn't go out there and fight my fight and be who I am. I have to trust myself this next fight and open up. I've got 30 fights with amateur and pro and it's time I trust myself and go out there and be the exciting fighter that got me to the UFC.”

Brown was that exciting fighter when he scored a come from behind finish of Dylan Lockard on Dana White’s Contender Series last summer that earned him his UFC contract, and he gets another opportunity to be one again when he tackles newcomer Danny Chavez on this weekend’s UFC 252 card in Las Vegas. Being exciting and getting his first win in the big show is important for Brown, but perhaps more important is having his eight-year-old son Kyler see that when you fall down, it’s important to get back up. And Brown was down after the Griffin fight. 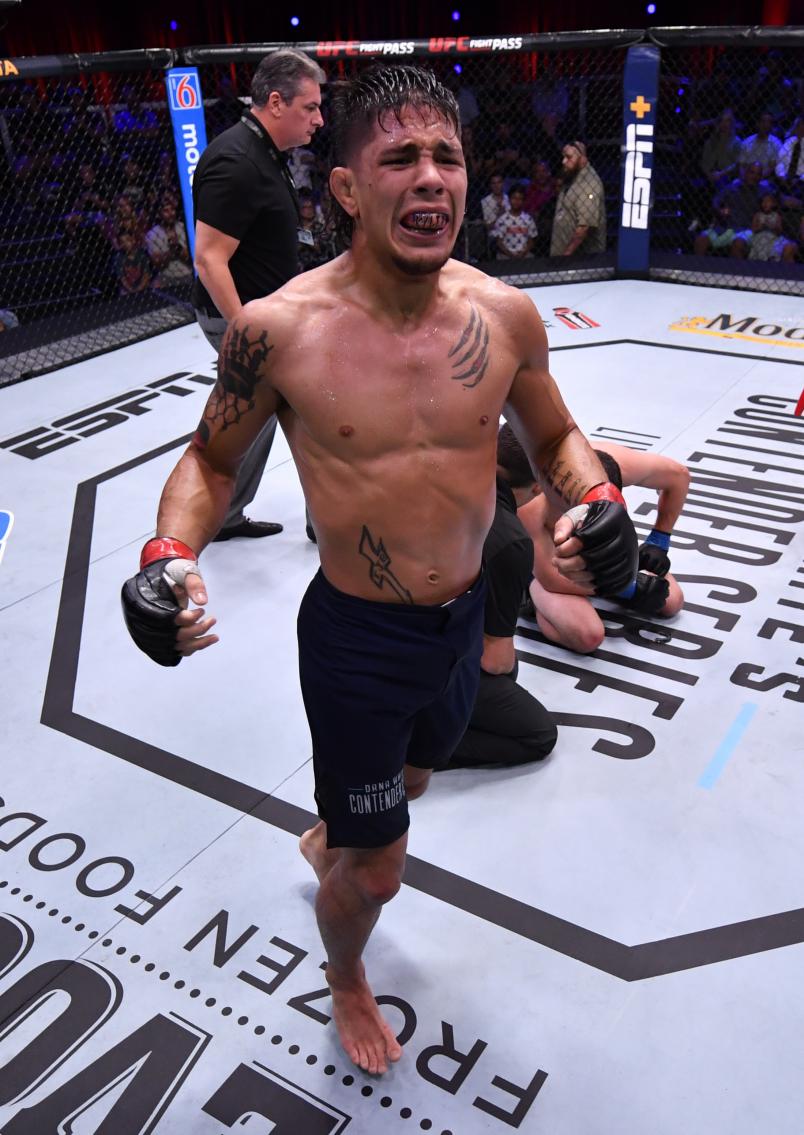 “My son does get a bit emotional and a bit nervous when I fight,” said Brown. “He does love watching the UFC, loves the fight game, but when dad fights, I think it's a little bit different. I'll tell you this, it was heartbreaking, it was very sad, it wasn't the outcome we wanted, but that's life. These things happen. He's gonna fall in his life, but what is important is that we stand back up, we get back to work and we come back at it. Life's gonna knock us down, but just like his father, he's gonna continue to stand up and I'm gonna continue to stand up and I'm gonna set a good example this next fight. Like the song says, 'Life's a dance, we learn as we go.' Either way, we gotta give it a whirl.”

As Brown reels off the lyrics from the John Michael Montgomery hit “Life’s A Dance,” I am a little disappointed that he just said them and didn’t sing them. He laughs, only to give one line with a little vocalizing behind it.

“I learned something from my blue-eyed girl; Sink or swim, you gotta give it a whirl.”

Brown laughs again, in good spirits before one of the biggest fights of his career. That’s another lesson for Kyler, to never let the lows get too low or the highs too high. Good days will always follow bad ones, but only if you keep moving forward. And Brown is well aware that with everything he does, he has a set of important eyes on him.

“I didn't have a father growing up,” said Brown. “I didn't have that voice in my ear, that example, and for me to be able to give that to him, it means the world to me, and it would mean the world to me to be able to bounce back here and get this win and get back on the right track. No matter what he chooses to do in his life, he's gonna have bumps in the road and hopefully he'll remember some of the lessons I've taught him throughout life, and that is that no matter what happens, we have to bounce back and keep moving forward, and as long as we stay the course, things will find a way.”

Fighting is important to Brown. It’s what puts food on the table and it also gives him the drive to reach the goals he set for himself when he turned pro in 2013. But fighting didn’t make the 30-year-old who he is today. For that credit, he looks to his son, admitting that if it wasn’t for Kyler, he likely wouldn’t be where he’s at today.

“I have a lot of good friends of mine, and we were a rough crowd,” Brown said. “A lot of my friends are either in jail or have had drug problems or things like that. He (Kyler) looks at me like a hero, but he's the real hero in all this. If it wasn't for him, there's no telling where I'd be today. And I'm not proud of that, by any means, but I would not be the man and have the character I believe I have today if it wasn't for him. So to answer your question, I don't know if I would be here without him because a lot of days when I don't feel like getting up and doing things right, or I've got that guy asking me, 'Hey, let's go out tonight, let's do this,' I gotta remember that I am the father that I am and that I have this opportunity in front of me that I have to take advantage of. People can call TJ Brown a lot of things, but they'll never say I wasn't a great father.”

That part’s established. Now Brown wants to add more adjectives to his status as a fighter, and that quest begins on Saturday against a talented opponent who will be walking into the glare of the UFC spotlight for the first time. Brown hopes that experience edge he has will make a difference when he faces Chavez.

“I believe that there's gonna be a huge advantage with that because I experienced that myself with my UFC debut,” he said. “Even having as many fights as I did, it is different fighting in the UFC Octagon and he will be experiencing that and hopefully I'll be able to take advantage of that. Also, I believe he has not fought the quality opponents I have throughout my career, so I just think I'm gonna be a whole other level of animal coming in there. I'm not disregarding him and I don't want to ever talk down my opponents, because without them, we wouldn't be having a fight, and I'm very thankful he's taken the fight and we have the opportunity to fight on this big UFC 252 card. But I just think there are levels to it, and I'm gonna go out there and show everyone that.”

If he’s right, there will be a celebration in Las Vegas and likely an even bigger one back in Little Rock. The thought of that makes TJ Brown smile.

“It's a feeling I've been wanting, and I won't be satisfied until I get it,” he said. “I believe everything's coming together and it's my time. I just want to put on a performance I'm proud of and get my hand raised. There's been a lot of people behind me all these years and I'd sure like to get a win not only for myself, but for them. So I'm gonna fight and I'm not gonna let anything hold me back. I'm not telling you right now, today, I'm gonna be the UFC champion, but you will watch me make a run and make a statement in the UFC and people will remember me.”