Counting down Tito Ortiz' defining moments in the days leading up to UFC 140... 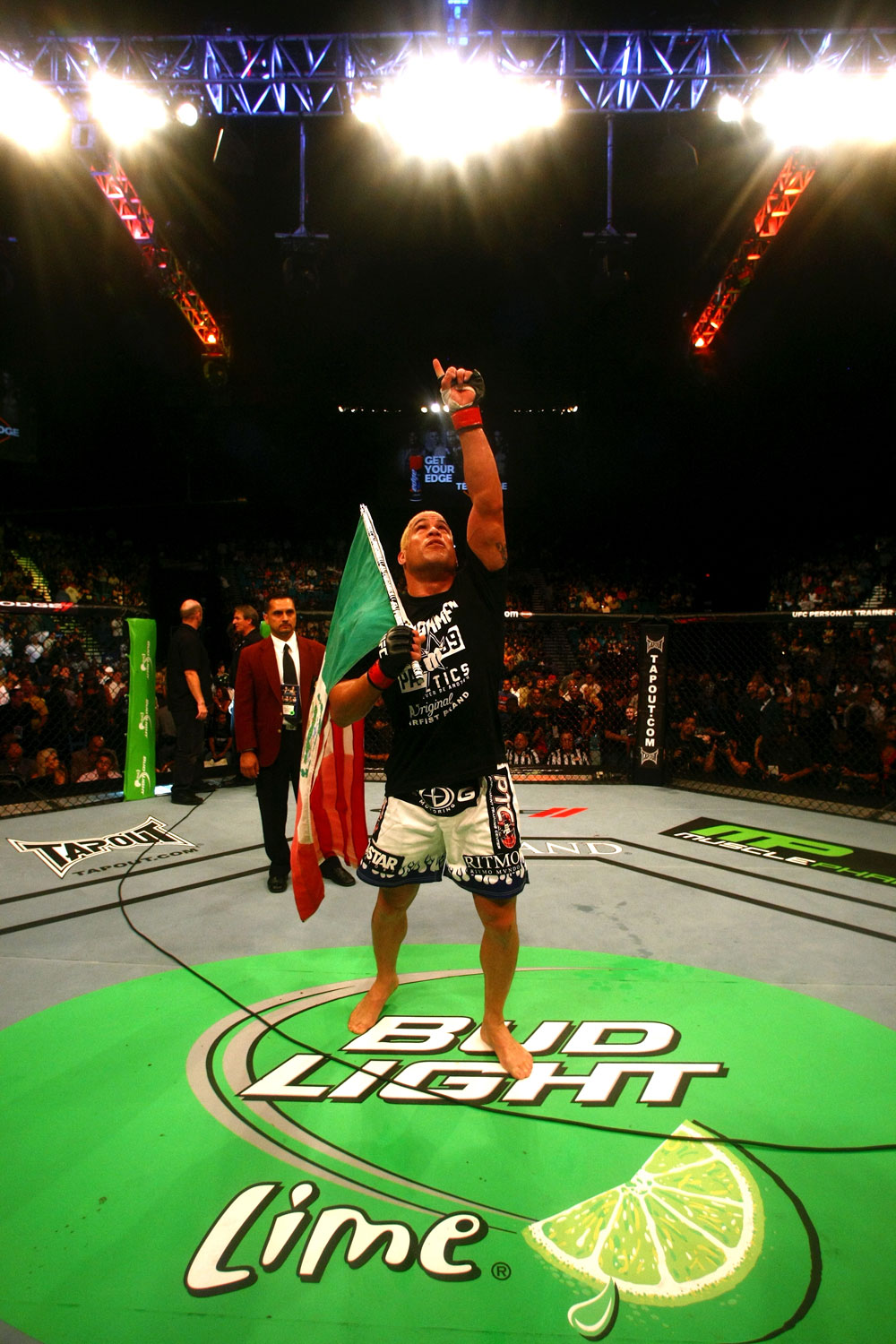 With an over 15 year stint in MMA that has seen him compete in a host of Superfights while also defending the UFC light heavyweight crown more than any fighter in history, it’s hard to whittle down Tito Ortiz’ career to just nine memorable fights, but as his UFC 140 bout against Rogerio Nogueria approaches, we’ll give it our best shot as we look back at the defining moments of the career of the fighter formerly known as “The Huntington Beach Bad Boy.”

Guy Mezger – May 30, 1997 – UFC 13
Result – Ortiz TKO1
One of the most memorable fights from the early UFC era, Ortiz avenged his only loss against the talented and highly regarded Mezger via a stoppage at the 9:56 mark. More importantly though, he ignited one of the greatest rivalries ever seen in combat sports after the bout, as a post-fight trash talk session with Mezger’s Lions Den coach, Ken Shamrock, started a feud that would lead to three high-profile bouts with “The World’s Most Dangerous Man” over the next nine years which would make Ortiz a superstar.

Frank Shamrock – September 24, 1999 – UFC 22
Result – Shamrock WSub 4
One of the most memorable fights from the early UFC era, Ortiz and Shamrock went to war for three rounds where it was safe to say that either man had a good chance of eventually pulling the fight out. By the fourth round though, Ortiz was losing steam and his conditioning betrayed him as Shamrock pounced and finished him. Ortiz learned a valuable lesson that night though, and never again would conditioning be an issue for “The Huntington Beach Bad Boy,” who instead adopted a Spartan philosophy when it comes to preparing for a fight.

Wanderlei Silva – April 14, 2000 – UFC 25
Result – Ortiz W5
Before Silva would go on to establish himself as one of the sport’s most feared competitors during his memorable run in PRIDE, the Brazilian fought Ortiz for the vacant UFC title and got soundly decisioned over five rounds. While not the most exciting UFC bout of all-time, Ortiz stuck to his gameplan and more importantly, absorbed anything “The Axe Murderer” threw at him and stifled the offensive fury of his opponent en route to the victory.

Ken Shamrock I – November 22, 2002 – UFC 40
Result – Ortiz TKO3
Though Ortiz was already firmly entrenched as UFC champion, Shamrock’s return to the UFC brought a whole new legion of fight fans into the fold in what was to that point the biggest event in the history of the Ultimate Fighting Championship. And what those new fans saw was a one-sided thrashing of Shamrock by Ortiz, who became, without question, the undisputed poster boy for the UFC that night. Two more fights would follow with Shamrock, with even more decisive results, as Ortiz would score back-to-back first round stoppages.

Randy Couture – September 26, 2003 – UFC 44
Result – Couture W5
Couture, in his second fight at 205 pounds after back-to-back stoppage losses in the heavyweight division, was seen as just another notch in the belt of Ortiz, who was riding high and had the ego to go along with it. Couture took Ortiz back down to earth though with a relatively easy five round decision that shattered Ortiz’ new aura of invincibility and forced him to re-evaluate his game. Couture’s playful spanking of Ortiz late in the fight only added insult to injury for the Californian.

Chuck Liddell I – April 2, 2004 – UFC 47
Result – Liddell KO2
Looking back, the result of this fight was inevitable. With controversy and allegations of ducking his former buddy Liddell swirling around him, Ortiz took this megafight and then made the fatal mistake of trying to punch with the puncher. Liddell, in control from the start, finished matters in the second, bloodying and stopping his foe in emphatic fashion.

Vitor Belfort – February 5, 2005 – UFC 51
Result – Ortiz W3
Originally scheduled for UFC 33, the off-again, on again bout between Ortiz and Belfort had lost some luster over the years due to the declining fortunes of both men at the time, but it finally came off at UFC 51, and Ortiz, in the last bout of his contract at the time, proved he could truly win ‘the big one’ as he survived an early onslaught from “The Phenom” to roar back and take a stirring three round split decision over the talented Brazilian. Ortiz would subsequently leave the UFC and sit out the next 14 months in an acrimonious dispute with the organization.

Forrest Griffin I – April 15, 2006 – UFC 59
Result – Ortiz W3
Ortiz returned to the UFC after a bitter contract dispute and began the second phase of his career with not only a stint as a coach on The Ultimate Fighter reality show, but with this bout against one of the fighters who filled the popularity void in Ortiz’ 14 month absence, Forrest Griffin. The question was, would Ortiz be able to capture the fans back in his return, which coincided with the UFC’s initial foray into California? The answer was a resounding ‘yes’, as Ortiz pounded out a close three round decision over Griffin, and did it in a packed house at the Arrowhead Pond in Anaheim that cheered his every move. The Bad Boy was truly back that night, but after scoring the last two of his three wins over Shamrock, he would not get his hand raised in the Octagon for nearly five years.

Ryan Bader – July 2, 2011 – UFC 132
Result – Ortiz Wsub1
After a series of injuries and surgeries and a nearly five year stretch where he went 0-4-1 (albeit against Liddell, Rashad Evans, Lyoto Machida, Griffin, and Matt Hamill), it appeared that the end of the line had come for the 36-year old Ortiz when he signed to face rising star Ryan Bader at UFC 132. But Ortiz, now healthy, reached deep and pulled off a prime performance, as he rocked and dropped Bader with a right hand before finishing him with a guillotine choke. It was an emotional and career-saving victory for the former champion.